National Geographic explorers take Will Smith on an adventure to see and discover new things in Welcome to Earth, a six-part series now streaming on Disney+. I had the honor of speaking to three of his guides about their experiences working on this show and beyond. Here’s what I learned from marine biologist Diva Amon, mountaineer Erik Weihenmayer, and engineer Albert Lin. You can also see the full interview with Diva Amon at the end of this article. 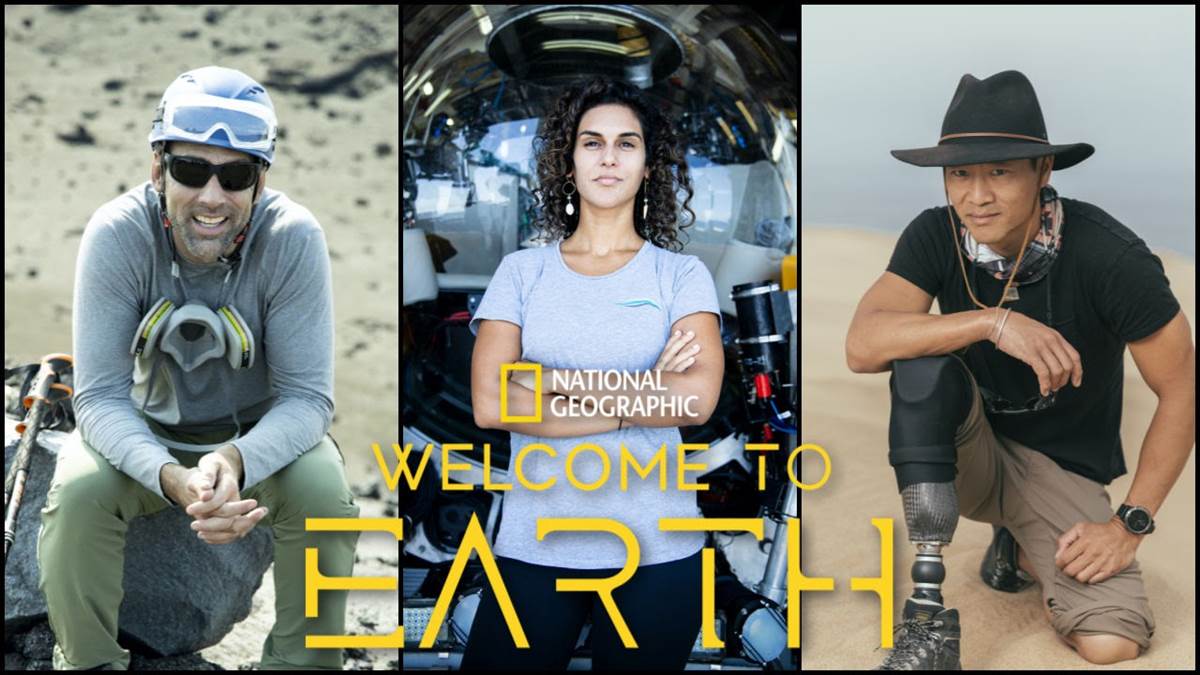 How did you get involved with Welcome to Earth? What was that process like?

“I got an email and I actually thought it was a joke and I didn't respond,” laughed Diva Amon. “I just thought it was spam or something. And then they sent a follow-up email and I was, oh my gosh, okay, this must be true. And yeah, that was it. They had a meeting and it's been a wild ride and one that has been really life-changing, ultimately. So don't delete emails, basically.”

“I saw Will Smith develop a series prior called One Strange Rock, which was probably one of the most beautiful things I'd really ever seen,” explained Alber Lin, famous for his Nat Geo series Lost Cities with Albert Lin. “I was huge fan of that style of visual storytelling. And then when I get this call saying, ‘Hey, we're thinking about really taking Will into the most extreme parts of the world to have these visceral experiences with the planet in a way that will make your mind warp to the understanding of what's really happening around us. You want to go?’ It was like, ‘Yes. What?’ You know? Because I also grew up with Will Smith. I mean, I grew up with the guy. Right? Everybody did. Every day, I'd come home from school, and there was The Fresh Prince on the TV show. Right? I watched Men in Black growing up. My kids now watch Aladdin and see him as the genie, like the genie. Right? So for me, I went there with a ton of anticipation. But what was the most incredible thing was just how that all kind of got reshuffled and melted away once we were in the field. Because the places we went, they were so authentically raw and real and hard to just describe in how intense they were, that all of that sort of celebrity kind of melted away. And you just dissolve into this person that you're with, this friend that you're with, trying to just take on this unreal fathom of nature that we're experiencing on the show.”

For Erik Weihenmayer, it all started with a phone call and sometime later, he’s riding to a volcano with one of the biggest celebrities on the planet and volcanologist Jeffrey Johnson. “We were studying the soundscape and he had developed this scientific equipment to be able to study the infrasound. Obviously, there's sound that you hear, but then there's sound waves that are so long, I mean, they can be hundreds of feet long. They can pass through 300 feet of rock, and you can't hear them as a human being. Maybe an elephant can hear them, certain animals, certain species, but we can't hear them. There's no evolutionary reason for us to be able to hear sound of that magnitude. So, you really detect it, and it was really hard to do, but you could detect it through pressure changes, like a sonic boom going through your chest cavities, and your eyeballs, and your brain. It was very intense.”

“We dove down to a kilometer depth in the Bahamas, which is in the Caribbean, which is where I'm from,” Diva Amon shared. “The goal of our dive was really to explore the theme of color. And we do that as you go deeper, not only does the light fade but also the colors change. And ultimately, when we get to the deepest point, he learns this lesson that there is lots of color, even in one of the darkest parts of the planet…

“I've been exploring the world as a blind explorer through my other senses for 30 years, so it was so cool to study the soundscape of the volcano with Will and teach him how I navigate,” mountaineer Erik Weihenmayer explained. “We had a great time, and I told him, I said, ‘Hey, Will, you could be easily a member of one of my climbing teams.’ Because he's so laid back, he's laughing, we're having a good time. He's transparent with his emotions, which is really important. Somebody's like all bottled up, and seized up, and trying to act extra tough, you can't read them. It's way better as an explorer to be able to see when somebody's honestly experiencing fear or excitement, or needs a little help. You'd much rather deal with somebody like that. And Will was just that. He was really, really just down to Earth and transparent.”

“The desert is a place that I find to be a very spiritual place, a place where I did a lot of my own physical healing,” Albert Lin prefaced, sharing how he recovered from a life-changing car accident and why he chose this destination for Will Smith. “I ended up being able to go to the most incredible desert on the planet, literally the biggest sand dunes in the world, with Will Smith, to share that true, authentic, deep love for the desert that I have inside me with him. So then we're standing on this mountain of sand on the Skeleton Coast of Namibia, and we're in this sandstorm that is so intense. I've never felt anything like it. I mean, it really is at a scale of a sandstorm that is beyond anything I experience anywhere else. And it's almost knocking us off the side of this mountain, and I'm actually seeing the mountain move like waves, as the wind is blowing the sand across the horizon in every single form. You barely open your eyes because of all the sand. You're wearing glacier goggles essentially… You're feeling the earth shift under your feet. And I think that that was something beyond my expectations. I had gone there to show him something that I really love and cared about. And then in my own experiences, saw something I never understood before it, saw something I never really even had the sensory capacity to grapple with before that moment. And then we're there together. And it was just like, ‘Wow, how did this happen to me?’ I happen to be with will Smith, the most incredible place in the world with the best camera crews in the whole planet filming this. Essentially, it felt like an adventure among best friends. And that's what we bring to the show.”

“Oh my gosh, that is such a hard question,” Diva Amon laughed. “I'd probably choose National Geographic Explorer Dr. Asha De Vos. She is honestly probably one of my main forms of inspiration. She's also a woman of color, she's from Sri Lanka and she was the first person that I was able to look at and say, Hey, this is possible, she's done it. So, she does incredible work with sperm whales and lots of whales. And I would just love the chance to be able to be with her doing work in her home country's waters, or anywhere else in the world for that matter. She's just been a real source of inspiration.”

“For me, I think it always goes back to some of my early inspirations,” Albert Lin revealed. “You see that picture of Jane Goodall sitting in a jungle canopy, looking out across the horizon. That picture just is like, wow, and the essence of exploration there. She broke all these molds of what exploration was about, what science was, our understanding of what is human, what we are in the animal kingdom. And I feel like if I could go anywhere, I think I'd go back to that one. You see this one image of her looking out across the jungle. I think I'd go back to that moment in time with her and just feel what that felt like.”

The question was a little difficult for Erik Weihenmayer to answer, but he elaborated on the beauty of his Welcome to Earth experience. “A lot of the places I go, I go to climb a mountain. Sure, you experience the culture. I really believe strongly that you don't just go use nature, you really want to experience the culture and the people and connect with that before you go experience the thing. But this show was different because we were there to explore. We were there to learn and convey information, and joy, and beauty to other people. So I think the show nailed it.” He is inspired by the diversity of the explorers presented in the series, not just in terms of gender or ethnicity, but also their unique skills and abilities.

All six episodes of Welcome to Earth are now streaming exclusively on Disney+.