Touchstone and Beyond: A History of Disney’s “The Ref”

It’s the Christmas holidays, and what better way to celebrate the yuletide time than with the Denis Leary comedy caper, The Ref. What happens when a thief takes a married couple hostage on Christmas Eve? Comedy gold. 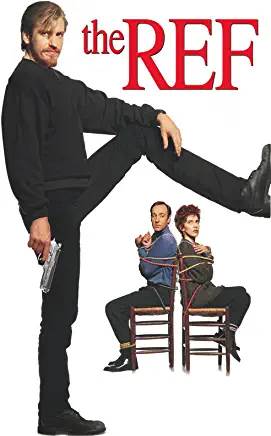 A planned Christmas Eve burglary goes awry for Gus. Being abandoned by his partner, Gus takes refuge in the home of Caroline and Lloyd, whom he takes hostage, in hopes of escaping when the proverbial heat from the police dies down.

Gus quickly realizes that Caroline and Lloyd are not a loving couple, but a bitter unhappy twosome who despise each other and could jeopardize his safety. As the night unravels, Gus soon finds that it’s almost impossible to control Caroline and Lloyd.

From hostage taker, Gus becomes a referee between the constant battles between Caroline and Lloyd. When family members show up for dinner, Gus switches gears again and pretends to be the couple’s therapist while hoping to still evade the pursuing cops.

By the end of the night, Gus is exhausted, not from his crime, but from trying to survive the night with Caroline and Lloyd.

Denis Leary is funny. His character Gus is nothing revelatory, but rather a crook with a decent heart, who helps more than he hurts. Leary’s Gus isn’t a bad guy, just a crook. The Ref allows Denis Leary to do what he does best. An explosive arrangement of sarcastic and cynical humor lights up the screen, thanks to the talents of Leary.

Judy Davis is simply brilliant in the role of Caroline. She channels the frustration and misery of a middle-aged woman who is simply tired of her husband. Davis tears into Spacey’s Lloyd with glee and the carnage she causes is fun to watch.

Revelations about Kevin Spacey in the past few years make it difficult to enjoy his work now. However, there is nothing unique about Kevin Spacey’s Lloyd. I’ve seen this performance before from Spacey. Lloyd gets the usual Spacey mannerisms that are well documented on screen, from Outbreak, Swimming with Sharks, and even American Beauty. While the downtrodden Lloyd is a great character, Spacey’s performance is aided by the fact that he is playing off of the brilliant Judy Davis, and the cynical Leary.

If you really dislike Kevin Spacey, then maybe skip The Ref.

The Ref is hilarious. It’s one of those movies where the lead actor, Denis Leary, gets to be himself, but also challenges that character to adapt to the craziness of the situation he finds himself in. The fact that the robbery didn’t go well for Gus, and then escalates into a kidnapping is just the beginning of how the night goes wrong for Gus.

Denis Leary as Gus is one of those perfect moments of casting. He makes the crook likable, which can be difficult to do. Pairing Leary with Judy Davis and Kevin Spacey and seeing how the three of them deal with the situation is what makes the movie enjoyable.

While Kevin Spacey will always have a negative taint to the film, audiences will love how he, Leary, and Judy Davis tear apart the scenery as they bring their misery to life. As the old saying goes, “misery loves company”, and it certainly finds likable qualities in the three leads.

The Ref gets a Level 3.5 ‘Streamy Award’. It would be the perfect film for background entertainment, but also, viewers will enjoy sitting down and consuming this picture in one sitting.

It’s too bad that this movie didn’t get the love and attention that it deserved. A Christmas movie that gets released in March shows how little the company knew about the film. What a colossal loss of revenue. Imagine how much money it would have made if The Ref was released in November or December? What a missed opportunity for Disney.

‘Touchstone and Beyond’ will return in two weeks after a short break for Christmas holidays. Merry Christmas to everyone, and though Hallmark Christmas movies are enjoyable, try checking out The Ref. You might find a new holiday classic to add to your festive viewing.