Beyond the Berm: Southern Cuisine With A California Twist at Huckleberry’s

While we’re still at the GardenWalk just outside of the Disneyland Resort, it would be nice to get some breakfast or lunch right? Huckleberry’s makes a great stop on your way into the parks for the day, or even if you’re just in this part of town anyway! Back in 2019, it was revealed that a new eatery, popular at several locations in Northern California, would soon be making its way south to Anaheim, taking up residence in GardenWalk. Huckleberry’s, founded in 2008, was spreading and the GardenWalk location would be the first of several outside of Northern California. 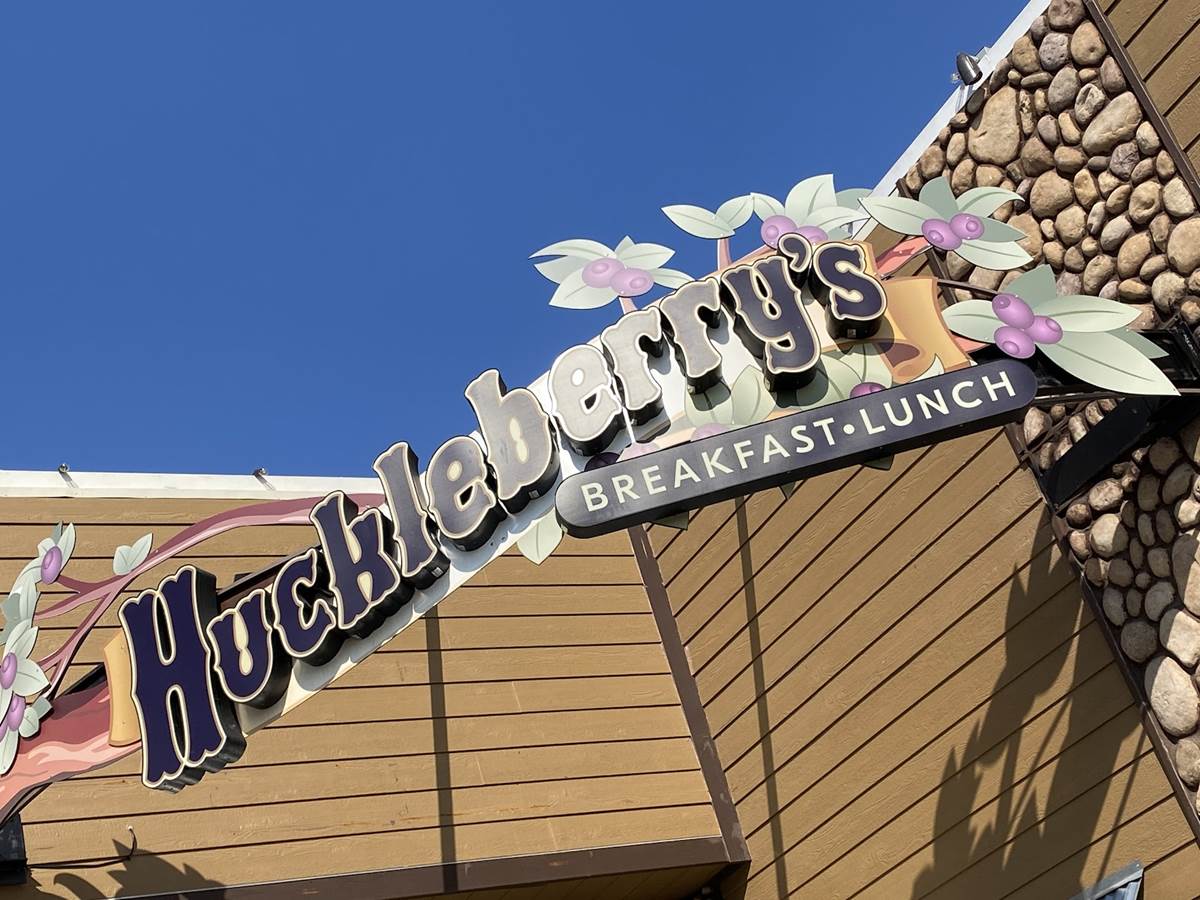 Like so many other restaurants in the area, especially nowadays, Huckleberry’s offers plenty of outdoor seating to take in the atmosphere from the upper levels of its location in GardenWalk. If you go inside, you’ll find a Mississippi atmosphere, a low level bayou in the middle of Anaheim (though, not quite as elegantly accomplished as that other Bayou-themed restaurant across the street, but still good). Once there, you’ll hear the unmistakable sound of  Zydeco and other southern music, and catch glimpses of the weeping willow tree sparkling with fireflies. 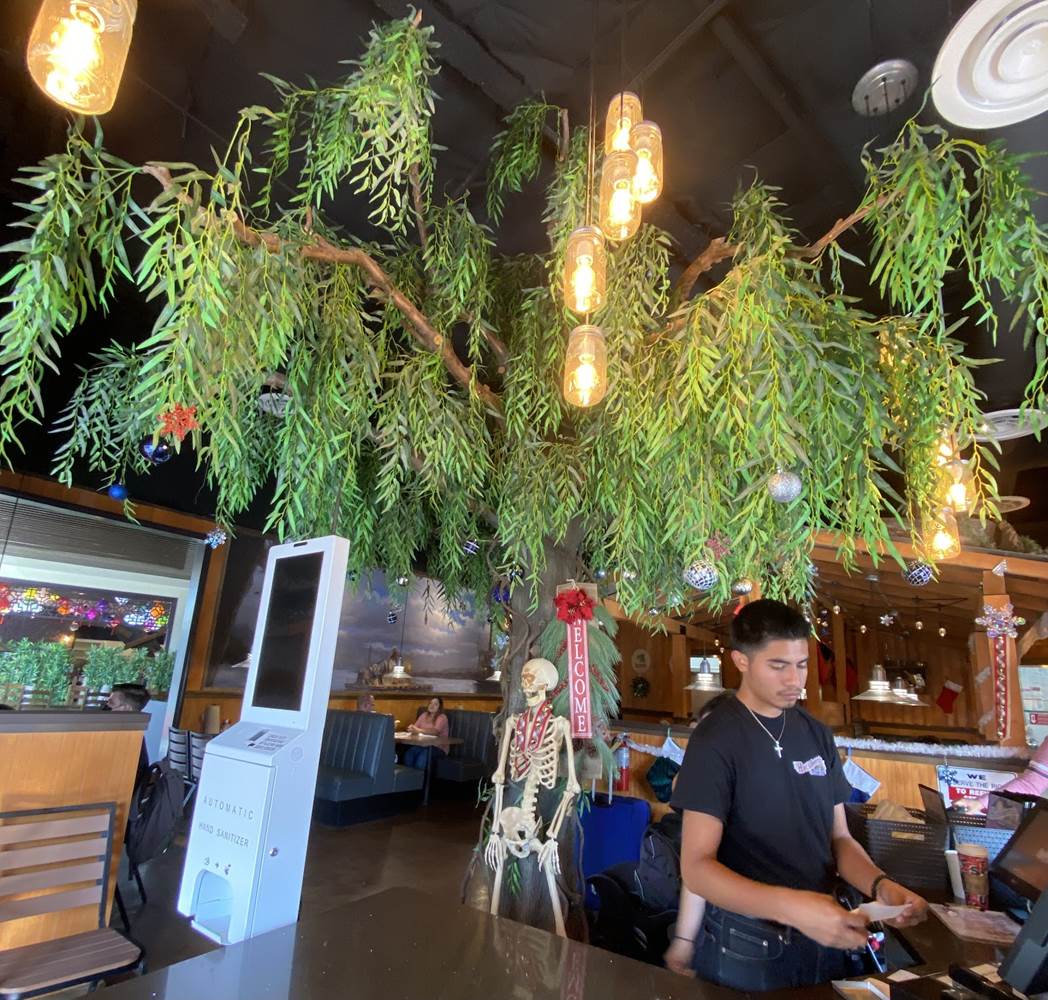 Serving up only Breakfast and Lunch, Huckleberry’s offers southern comfort foods but with a California Twist. While basics are still available, there are numerous specialty items that are signature to the restaurant. 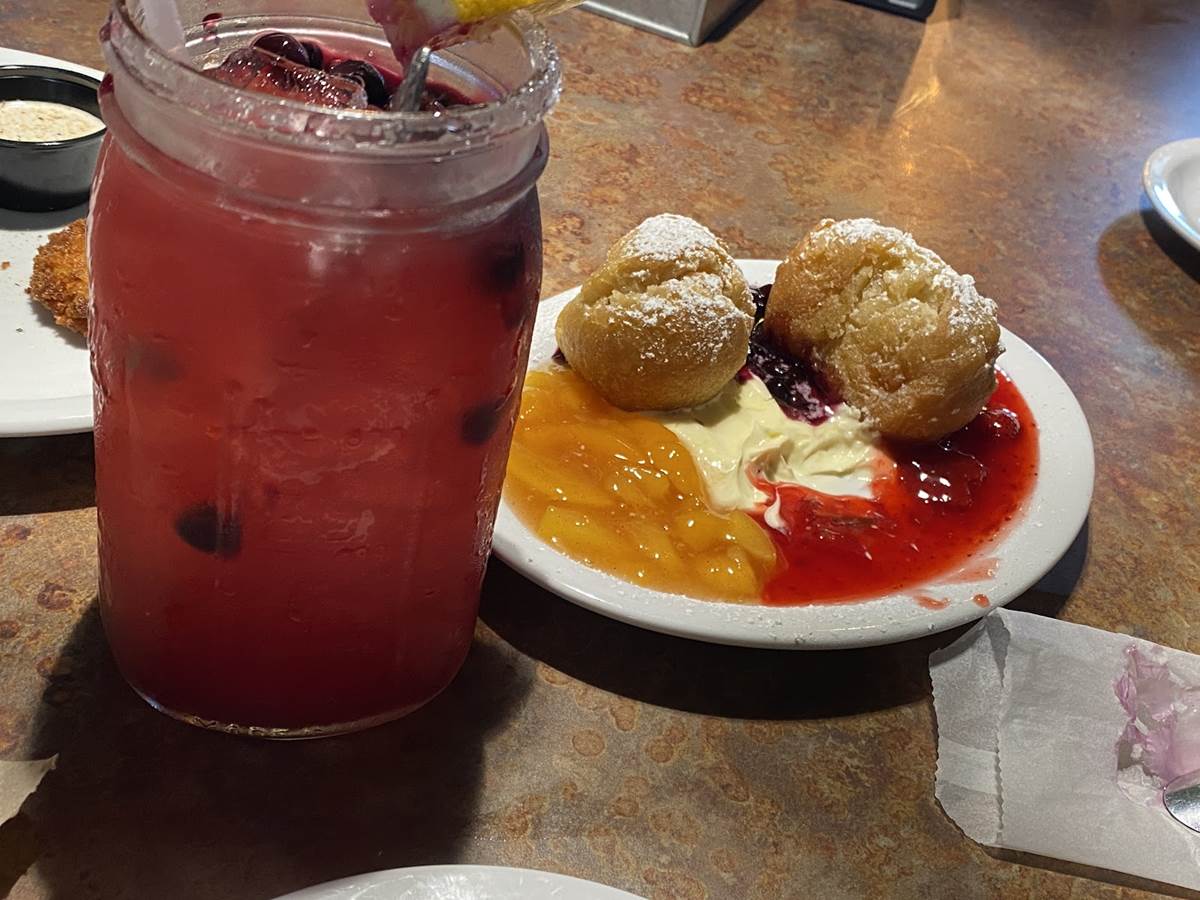 Mardi Gras Beignets are a delectable highlight, but be careful, though perfect to fit in the palm of your hand, they are as easy to eat as popcorn and more than a few will likely be had. There are also biscuits, and you can’t have a place called “Huckleberry’s” without a few huckleberries, right? Those appear throughout the menu, but can also be found in the huckleberry muffins. Other appetizers include some patty-sized fried green tomatoes, and fried okra. 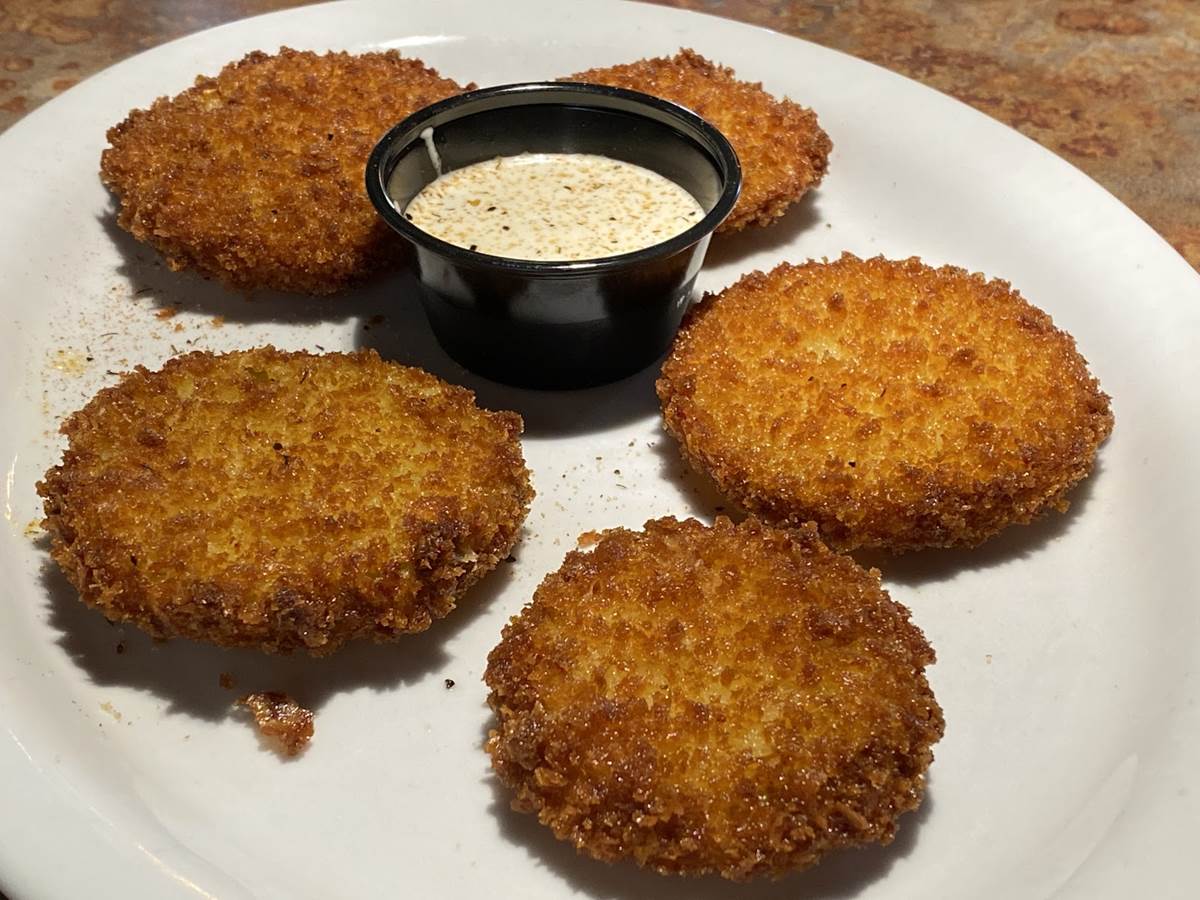 The full menu of appetizers are enough to sustain oneself for days, but the star of the restaurant are the sizable entrees. Chicken & Waffles, Skillet Hotties and Signature Omelets all steal the show at breakfast while “N’awlins” sandwiches and even southern fried catfish take over the lunch menu. Personally, I stuck with breakfast even late in the day, as the New Orleans “Skillet Hottie” was enough for me, loaded with Andouille sausage, Louisiana shrimp, and mushrooms covered in jack cheese and a creole sauce. 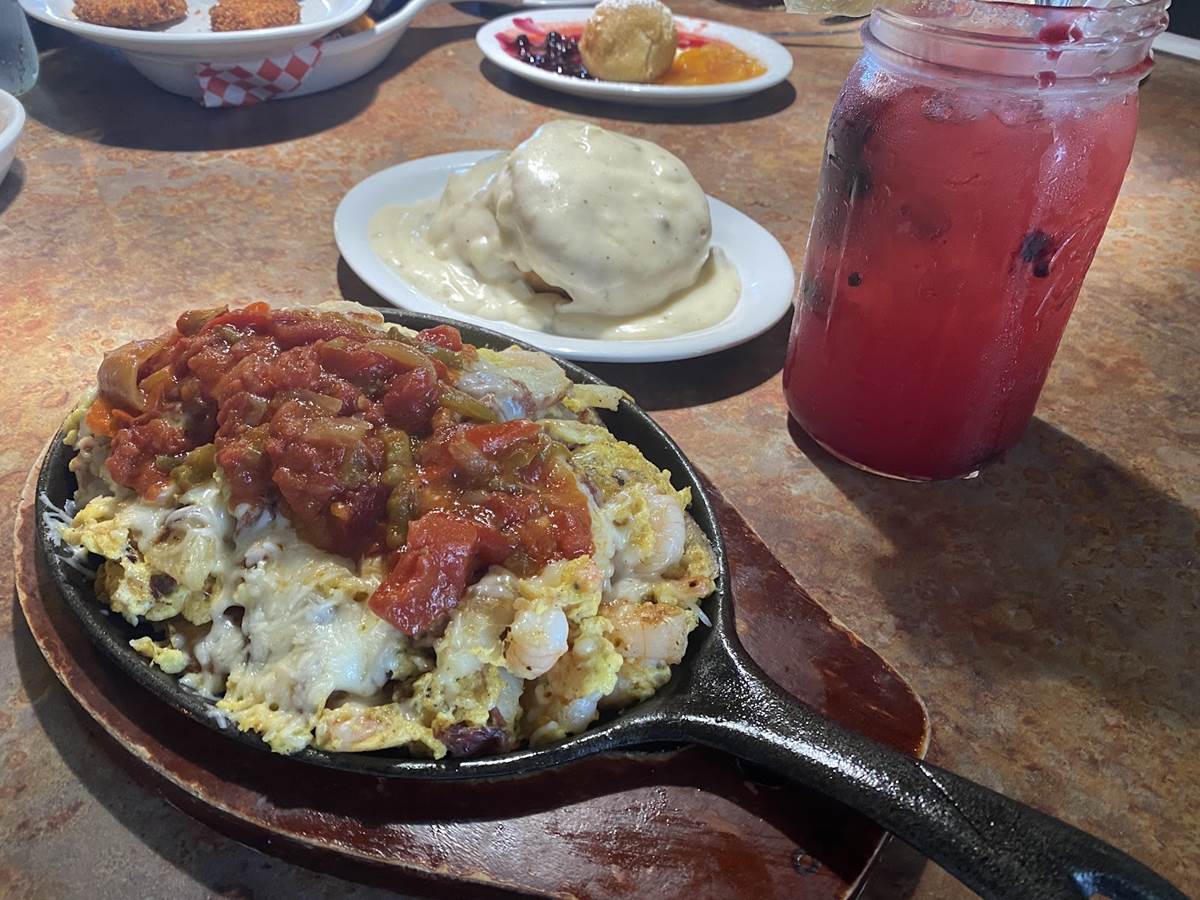 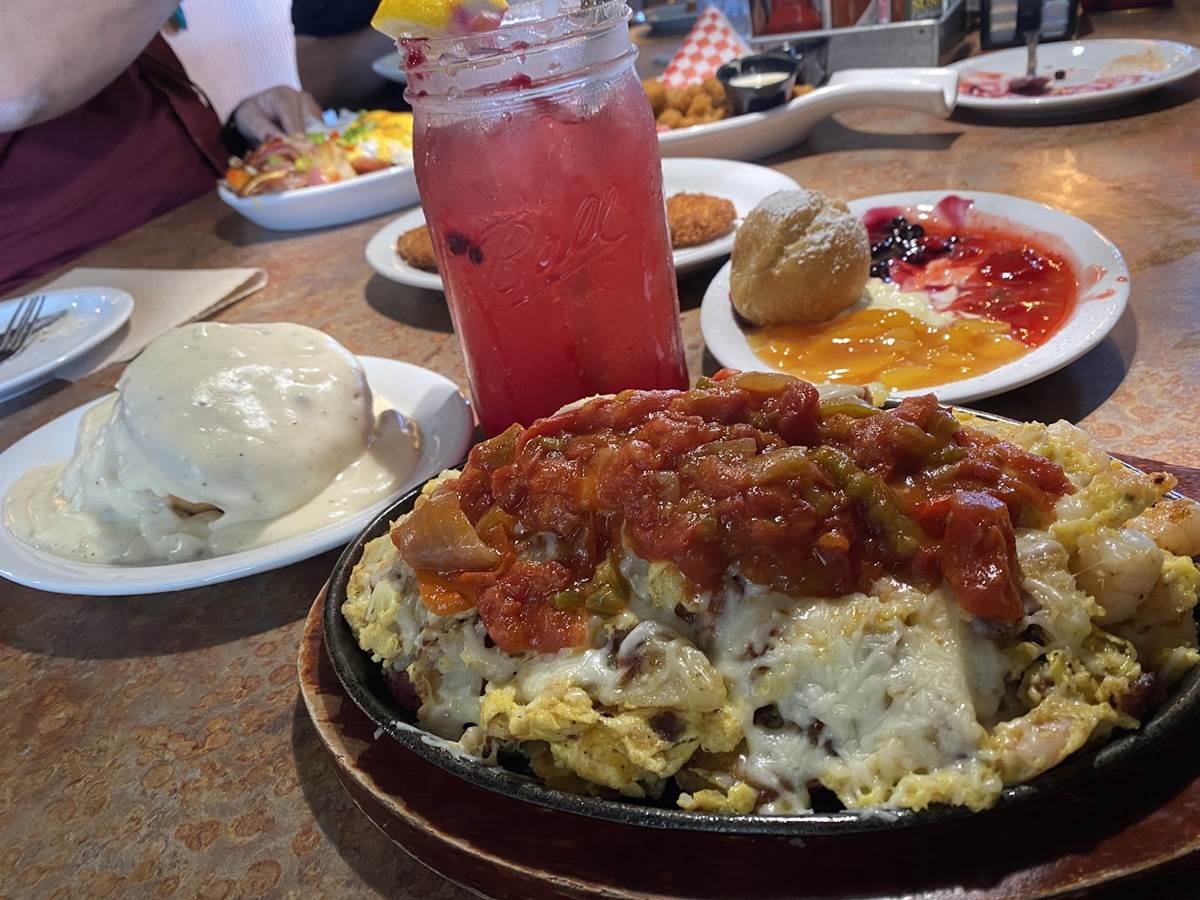 If this seems too heavy, there are some lighter less-fried options. Soups and sandwiches are also offered, or you can go for Huck’s Chicken Salad – fresh greens topped with seasoned chicken, avocado, tomato, cucumber, crisp bacon, a hard-boiled egg, and garlic sourdough bread. 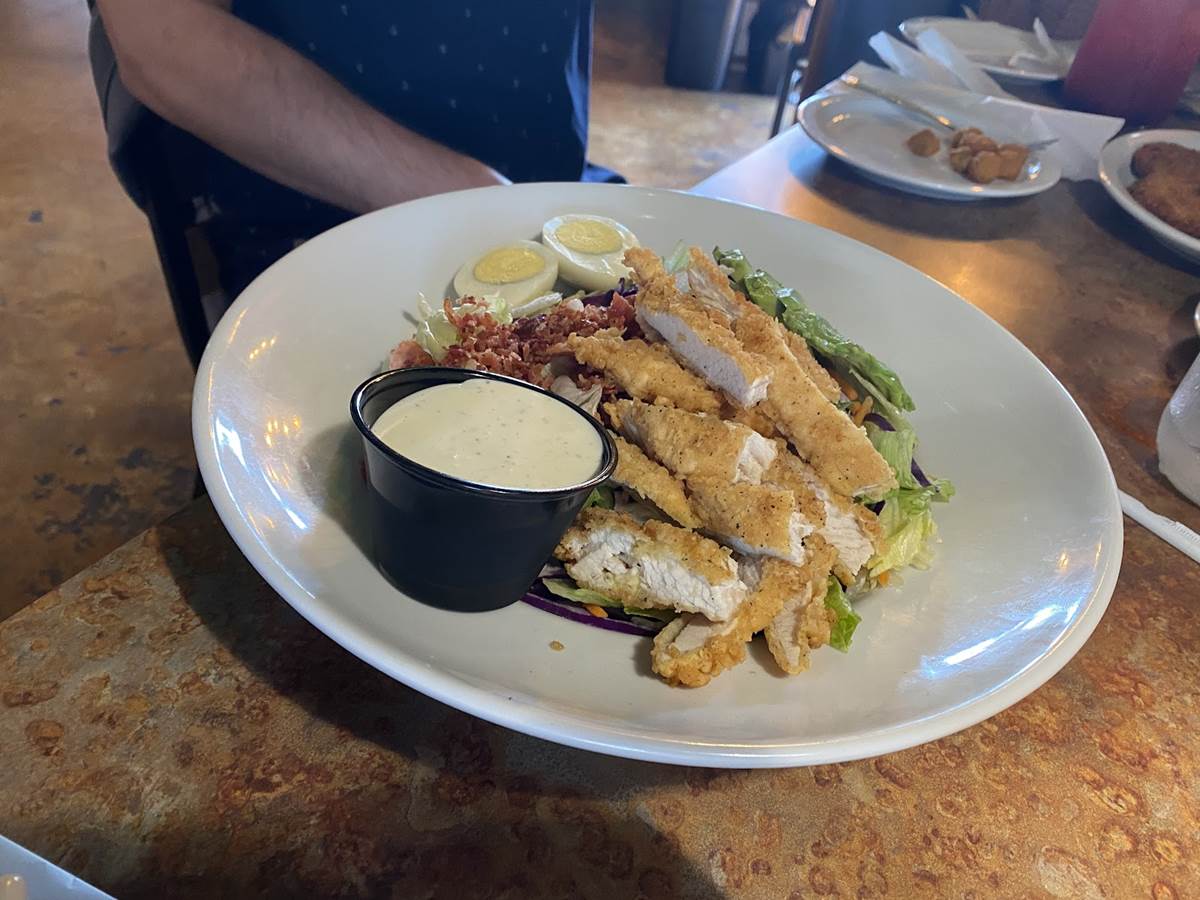 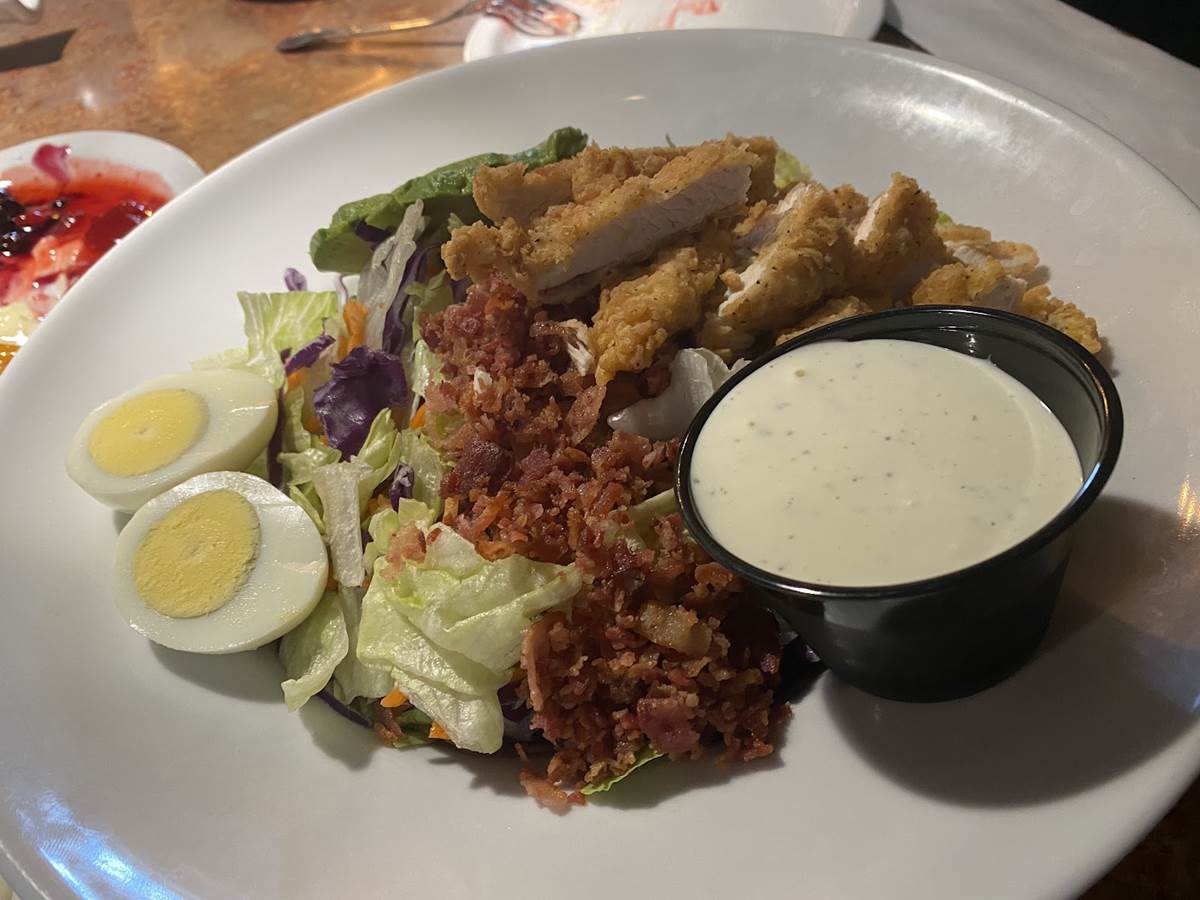 To wash it all back, they even have non-alcoholic specialty beverages, including Huck’s Swamp Iced Tea (loaded with Huckleberries) as well as a signature Huckleberry lemonade. All of which are served up in mason jars that are sugar rimmed.

Like I said, Huckleberry’s is a great way to start the day, but maybe just take some time to sit and savor everything you just ate before doing anything crazy next door (or anywhere else). Again, Huckleberry’s is only open for Breakfast and Lunch, everyday from 7:00 AM until 3:00 PM.