New Year’s Day falls on a Saturday this year and Cartoon Network is celebrating with the launch of a new Saturday morning cartoon, We Baby Bears. The We Bear Bears spin-off celebrates its launch with a 10 episode premiere starting at 10/9c am, followed by double-episode premieres on Mondays throughout January. That’s a lot of bears! During a TCA press conference, executive producer Manny Hernandez sat down with the voices of Baby Grizz, Baby Panda, and Baby Ice Bear to talk about the new show and its cultural themes. 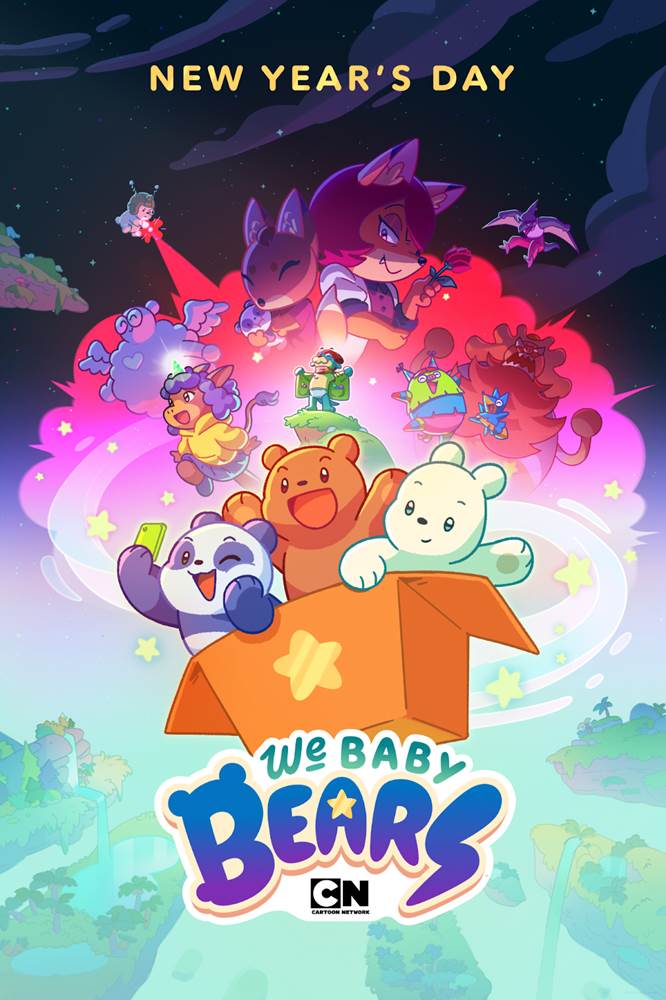 “I used to love Snagglepuss and Magilla Gorilla,” Manny Hernandez shared about the Saturday morning cartoons that inspired him. “And not to mention my favorite Hanna-Barbera, Tom and Jerry. That short series about a cat and mouse chase featured very little dialogue, escalating the need for physical antics. “There’s a lot of physical comedy,” he added, sharing that he brought that approach to We Baby Bears and the joy he gets from walking the young voice cast through the storyboards during recording sessions. “[They have to] come up with some scream or some noise that fits that, which is always fun and always very old-school Hanna-Barbera-ish.”

“I actually acted as Panda in the original series,” Max Mitchell revealed, who voices Baby Ice Bear in the new show. Back then, Manny Hernandez was supervising director on We Bear Bears and a few episodes had flashbacks to the main characters as babies. “It was a big change to switch from Panda to Ice Bear, but I think of Ice Bear as more cool, calculated, protective of his brothers, and very caring.”

“I didn't really see much of the original show at all because before HBO Max and whatnot, you needed cable to watch the show,” Connor Andrade shared, who plays Baby Grizz. “The only time we had cable is when I went to visit my grandma. So I only saw, like, bits of a few episodes at my grandma's house.” One of the lead voice actors was a fan before the audition, though. “I watched a lot,” Amari McCoy confessed, who takes over the voice of Baby Panda from Max Mitchell.

It’s a challenge the CalArts graduate has a newfound appreciation for. “Everyone that tries to make children’s television, I think it’s always hard and always a difficult task, especially me doing it now, I have a whole new appreciation for anyone that tries to tackle a subject,” he explained. “What I was trying to do different with the show is we have three main characters that are children. And one of the things that the characters do is they go to new worlds that they travel around to, to these new amazing worlds, and the kids want a sense of belonging in the show. So they go to find a place where they belong, and they either get themselves into trouble and get kicked out, because the people there are not where they actually belong and, more often, they leave the place better than when they got there. And the reason they leave the place better is because, to me, children have an innocence about them that is very truthful and honest, and I think honesty and truth and real true innocence is closer to the real human being within us. And that is an amazing thing about kids. When you talk to them and they can be truthful, adults can learn from that. So I think when an adult can get out of their ego, listen to children and listen to the fact that their innocence and their bright-eyed willingness to learn and their honesty is actually something we could very much learn from, that’s what I really wanted this show to explain.”

The fun of We Baby Bears starts Saturday, January 1st at 10/9c am on Cartoon Network.