Touchstone and Beyond: A History of Disney’s “Captain Ron”

It’s cold outside where I am, and what better way to shake off the winter blues, then by setting sail with Martin Short and Kurt Russell in Captain Ron. This Caribbean voyage will be impossible to forget. 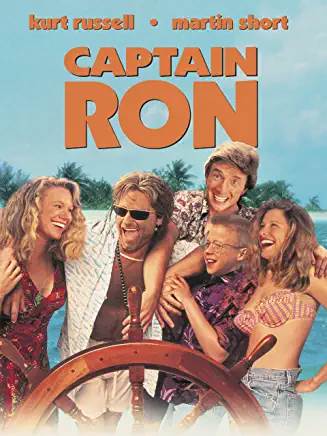 Martin Harvey lives a hectic life in an unfulfilling job in Chicago. One day while he is navigating the elevator at the office, he learns that his uncle has died, and bequeathed his yacht Wanderer to Martin.

Excited from his childhood memories sailing with his uncle, Martin convinces his wife Katherine and two kids Caroline and Ben to fly down to a remote island, San Pomme de Terre (what an awesome name for an island) and sail the boat to Miami and sell it for a profit.

On arrival, the memories of an elegant yacht, give way to a trashy boat that is barely above the water line. To make matters worse, the boat skipper hired to help the Harvey family navigate to Miami, is Captain Ron.

This laid-back beach bum does not instill confidence in Martin. As the journey begins, skepticism gives way to downright hatred. Martin despises Captain Ron, and for everything that goes wrong with the journey, Martin blames the affable skipper. Confronted by pirates and with Captain Ron injured, it’s up to the Harvey family to make the boat function on sail power alone or else they are going to die.

Kurt Russell is well known for his action hero past, but his work as Captain Ron is something unlike anything he has done before or since. The audience doesn’t expect someone with Russell’s past to be able to pull off the beach bum look. Not only does Kurt Russell transform into this slacker perfectly, but he is also genuinely funny in every scene. Playing against type and building a unique persona that is unlike anything done in his past, Russell makes the audience love Captain Ron, despite the fact he is the worst captain anyone could ever hire.

Martin Short plays the perfect straight man to Russell’s absurdity. Known for being the over-the-top part of a comedy act, Short gets to play it straight, which is an incredible performance by the comic. His Martin Harvey is an everyman character who just wants to sail the boat to Miami. The fact that Harvey sees past the obvious issues with Captain Ron upon first meeting him, and then tries to stay positive for most of the journey until he hits his breaking point, is brilliant. As much as I laughed at how Russel brought Captain Ron to life, seeing Martin Short try to restrain himself as he dealt with Ron was some of the best parts of the film.

The scene alone where Captain Ron warns Martin to stay on the trail to avoid the guerillas on the island is incredibly funny for many different reasons.

There is nothing wrong with the film. It’s funny, beautiful for a winter watch as it will place you in a warm location, and you will laugh along at the madness of Captain Ron.

The film was a failure at the box office, and for many critics, they couldn’t look past the fact that Kurt Russell was the comedic lead, and Martin Short played the straight man. To me, that’s the charm of this film.

Captain Ron is a comic masterpiece that gets a “Level 4 Streamy Award”. Watch this film on a big screen so that you can take in the beautiful blue waters of the Caribbean and laugh along at the insanity that Martin Harvey experiences with Captain Ron guiding his family through troubled waters.

In honor of Sidney Poitier’s passing, next week is a look back at his Touchstone Pictures action/thriller, Shoot to Kill.