It’s time to fly the unfriendly skies with Jodie Foster in the 2005 thriller from Touchstone Pictures, Flightplan. 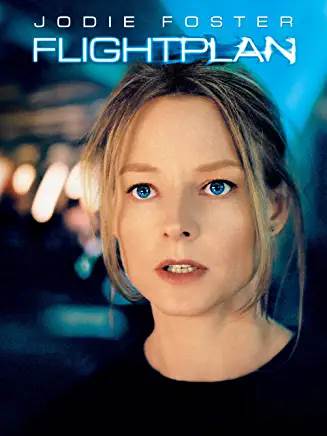 Kyle Pratt and her daughter Julia are flying home from Berlin. They are bringing home the body of her husband to be buried in the USA. Having dealt with the trauma of his death, Kyle is anxious to get her daughter home to her parents so that they can begin to rebuild from their tragic loss.

Aboard AALTO Airlines, a plane which Kyle helped design, she drifts off to sleep only to awaken to the worst horror possible, Julia has disappeared. Panicked, she searches the plane with the help of an Air Marshall named Carson and the captain of the plane, but Julia is nowhere to be found.

As panic ensues, Kyle is confronted with the fact that no one else saw her daughter. Is Julia real? Has Kyle imagined all of this? The more Kyle Pratt searches for her daughter, the more Carson and the Captain think that Kyle has had a breakdown.

When Carson’s true motives are revealed and Kyle finds evidence that her daughter is on the plane, she alone must save Julia.

Jodie Foster is incredible. She plays Kyle Pratt well with a mixture of action hero/determined parent. Foster doesn’t overdue the hysteria when Julia disappears, and throughout most of the film, you believe everything that Kyle Pratt does because Jodie Foster instills her character with dignity. There are so many ways that Kyle Pratt could have been played in a hysterical manic way, which Foster does not do.

Sean Bean as the captain is perfect casting. He’s authoritative but blends that role with a compassionate undertone that could be lost with many other actors. Plus, it’s nice to see Sean Bean in a good guy role that doesn’t get him killed.

The plot of the film is intriguing, but the multiple changes in the tone of the story is a little off putting. The movie starts off as a thriller on a plane, but then it’s a missing child story which transitions to a supernatural narrative (is Julia real, or did Kyle make her up), to finally a hostage situation. It feels like the overall focus of the story never decided what to make of itself. This confusion in tone is distracting and will derail the good will that the actors bring to their characters.

The death of Kyle Pratt’s husband is suspect at first and when we finally learn how this is all an elaborate scheme by the villain which targeted Pratt because of her work with the airline is a lot to take in. The fact that this crucial bit of information is a throwaway in a short bit of dialogue during the climax of the movie is wrong. I would rather have seen Kyle and Julia happen to be in the wrong place at the wrong time. The complicated and complex conspiracy that is played out is never fully explained, which leaves viewers wondering why these events are happening.

Leonard Maltin’s description of Flightplan is the best way to describe the film. It starts off suspenseful and builds until it turns ridiculous near the climax of the film.

I saw the movie in theatres when it came out, and while I enjoyed it at the time, there were holes in the story that left a bad taste in my mouth. The acting is supreme, but the story is a little far fetched and overdone that makes the audience lose interest throughout the film.

Flightplan is an okay movie, that gets a “Level 1 Streamy Award.” Are you a user of public transportation daily? Then download Flightplan to fill your time. That’s about all the attention you need to give to the movie.

Next week we step back in time to the 1992 thriller, Consenting Adults.