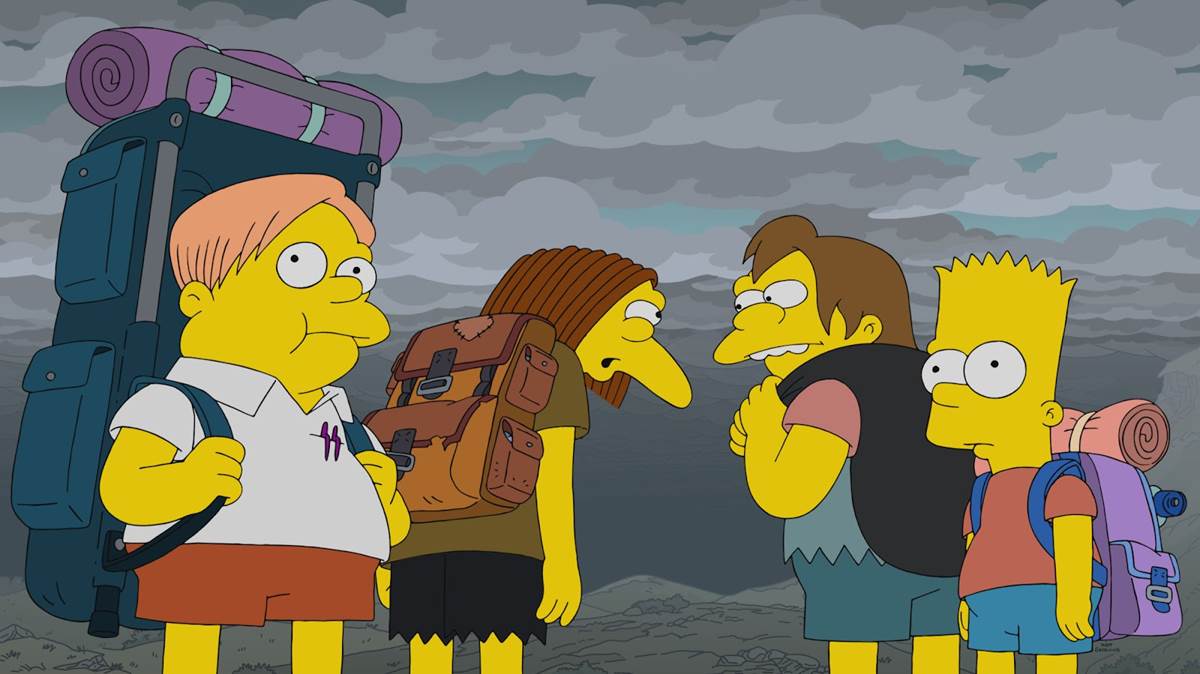 Hello and welcome to Laughing Place’s regular recap of new episodes of The Simpsons on the FOX Network. This week’s installment, entitled “Boyz N the Highlands” (a reference to the 1991 drama film Boyz N the Hood– much like the title of the fifth season episode “Boy-Scoutz ‘n the Hood”) is the 13th episode of the long-running animated sitcom’s 33rd season. “Boyz N the Highlands” begins with Groundskeeper Willie dumping Bart Simpson, Nelson Muntz, and Dolph Starbeam off in the wilderness, because he says they’ve “been sentenced to complete the highland trek for troubled students by the juvenile court.” An iPad video from Chief Wiggum begins to provide instructions, but Willie quickly gets frustrated and turns it off, leaving the kids to their own devices. Suddenly another car pulls up and Martin Prince gets out, with his parents sending him on his way. “Thank you, God. You sent me a dork so dweeby even I can pick on him,” thinks Bart. Willie says along the way on their trek, they might just find “the greatest of all treasures.” The boys begin their march through the highland, and Bart reveals that he got in trouble by dumping laundry pods in a town fountain, while Dolph stole an outdoor dining heat lamp, and Nelson stole change from the love tester machine at Moe’s Tavern.

Martin, however, says that he chose to go on the journey, because “this extracurricular activity will give me an edge with the most exclusive middle schools.” At the Simpson home, Homer suggests that he and Marge have some fun while Bart is away, but Lisa interrupts with the suggestion that she wants to live the weekend as an only child. She’s given Maggie to babysitters Patty and Selma, and shows Homer and Marge a pie chart of the time spent on her in comparison to her older and younger siblings. Her parents agree to spend more time with her, starting with playing horsey, and then we cut to the boys trekking through the highlands, where they make up a chant about Principal Skinner. They hear a baby goat bleating, and find it trapped in a cage. “The best thing to do is just kick it and leave,” suggests Dolph, but Nelson thinks it might be the “greatest of all treasures” Willie was talking about. Bart releases the goat from its cage and they continue along their way, naming their new pet Axel because it eats metal supplies from Martin’s backpack. From out of the mist come three druid-like cult members wearing skull masks on their faces, who demand the return of their sacrificial goat, “or my scythe shall reap your souls.” The boys take off running and hide behind a rock wall as the cultists pass by. “We finally meet someone cool and they want to chop us in half,” complains Nelson. They find a canoe at a riverside, but the goat refuses to get in. Martin doesn’t want to leave Axel to get slaughtered by the satanists, so Bart hesitantly remains with Martin for an eight-kilometer hike to the nearest bridge. At home, Lisa plays “Suffragette Monopoly” with her parents until she looks up at the time and realizes she’s way behind on her list of activities. She leads Homer and Marge into the kitchen to start baking bread.

In the highlands, Nelson and Dolph stumble across an upscale Airbnb that has a jacuzzi and record player, while the goat eats Bart’s cheesy rations and Martin invites Bart on a vacation with his family. “You’re a loser nerd,” says Bart. “We have nothing in common and we can never be friends.” At home, Lisa binges on ice cream and performs beat poetry for her parents while Marge plays the bongos and Homer snaps. Up next is a daddy-daughter piggyback ride, which makes Lisa (now calling herself Jules– more of an “only child” kind of name) throw up all the ice cream she ate. “That’s okay, sweetie,” says Homer. “All my best nights end with throwing up, too.” At the Airbnb, the cultists find Nelson and Dolph and demand the goat, but when they say they don’t have it they get banished to the dungeon. Bart gives Martin some advice over a fire, telling him to try liking normal things that other kids like. Martin unloads on Bart, telling him that he sees two therapists and is on a lot of drugs to keep him balanced. “And I didn’t volunteer for this juvie jaunt,” he admits. “Like you, I was sentenced to it because of what I did.” We then see a flashback of Martin breaking open a pharmacy window to steal more drugs, because he “wasn’t focused enough to please my parents.” “You may not be cool, but you’re psycho,” says Bart. “And that makes you kind of awesome.” Martin says Bart is only nice to him when no else is around, which makes him a conformist, and storms off with Axel on his own, leaving Bart by himself. He wakes up the next morning in his tent to Axel licking his face, but realizes it’s just a dream and he’s covered in slugs. In the dungeon, Nelson and Dolph ask to be let out in exchange for them doing “satanist stuff.”

At the Simpson home, Lisa wakes up in Homer and Marge’s bed, regretting her overeating the night before, but realizes that “it doesn’t get more only child” than having slept alone in bed with her parents. Meanwhile, Bart gets hopelessly lost in the highlands. He opens his compass and asks it which way to go, but when he doesn’t get a response he assumes he must not be getting a signal. But soon he stumbles across some cheesy goat poop and follows its trail to Axel’s location, where he finds Martin passed out on the ground. Bart says Martin was right about his appraisal of Bart’s need for approval from the bullies, but they’re interrupted by screams for help from Nelson and Dolph. The two older kids are tied to a sacrificial altar, where the satanists have dangled a swinging bladed pendulum above their heads. 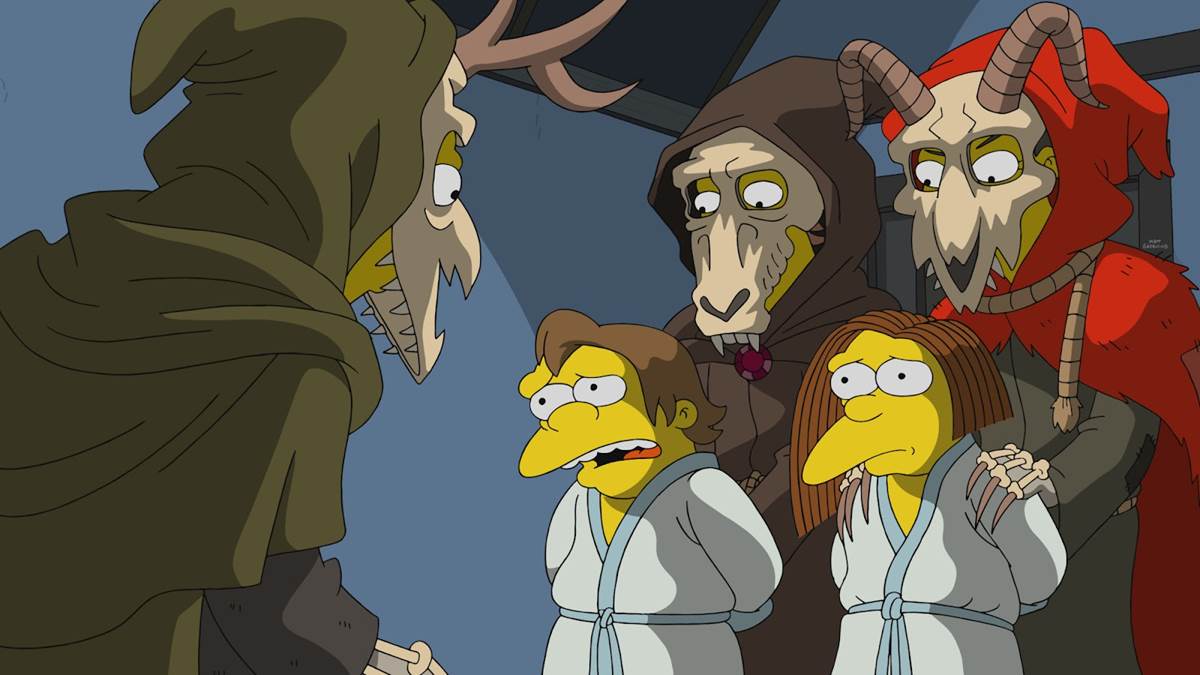 Bart and Martin rush in, attacking with their meager supplies, but the satanists quickly give up their ruse, removing their masks and turning off their voice-changing app to reveal teenagers making a movie. “They’re not satanists; they’re film students,” shudders Bart. “The only thing worse than nerds are film nerds,” says Nelson. “My cousin went to film school, and now he walks dogs for a living,” agrees Dolph. One of the teenagers gets frustrated by having their shot ruined and kicks the set, which begins to collapse around all the kids. “Those little dudes are gonna get sacrificed for real,” says one of the other students, but they use the opportunity to get some good footage for their movie. Martin comes up with a plan based on the mathematical movement of the pendulum, which he says synchronizes perfectly with Strauss’s “Blue Danube Waltz.”

Martin leads Bart in a dance to save their friends, and they successfully free Nelson and Dolph before they’re chopped in half. Axel the goat eats the teenagers’ iPhone, destroying their footage, which makes them break down in tears: “I can’t go back to selling essential oils on Facebook! No one knows what they are…” All four younger boys and the goat give a hearty “Haw-haw!” to the film students and then walk off back into the highlands. Nelson declares Martin “a certified pre-owned bad-ass,” and then the boys find Ankle Rock, where Willie was waiting to pick them up. He says the greatest of all treasures was the journey they made and the character they built, which leads Nelson to reply, “Are you freaking kidding me?” The kids start kicking Willie’s van until Martin’s parents pull up and tell him to “step away from those bad kids,” but Martin says he’s a bad kid, too, so he’s going to ride in the van with his friends. “If it makes you nervous, take a pill.” The boys and Axel ride off back toward Springfield in Willie’s van. 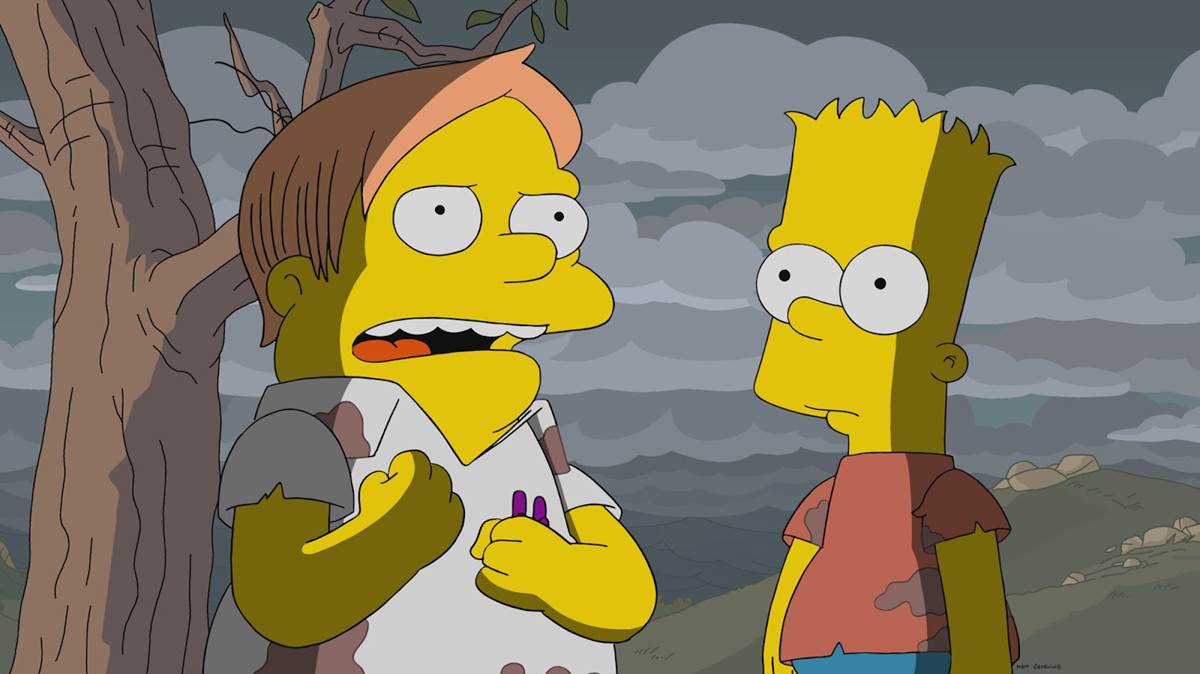 In the coda, Homer, Lisa, and Marge enjoy quiet time on the couch, but after Maggie enters and pulls Snowball II’s tail, the cat attaches itself to Homer’s face. Then Bart skateboards through the living room wearing nothing but his underwear and eating ice cream right out of the container. As chaos erupts, Lisa flips through an “Only Child Memories” photo album on her iPad and smiles, while Axel the goat begins to eat the couch. 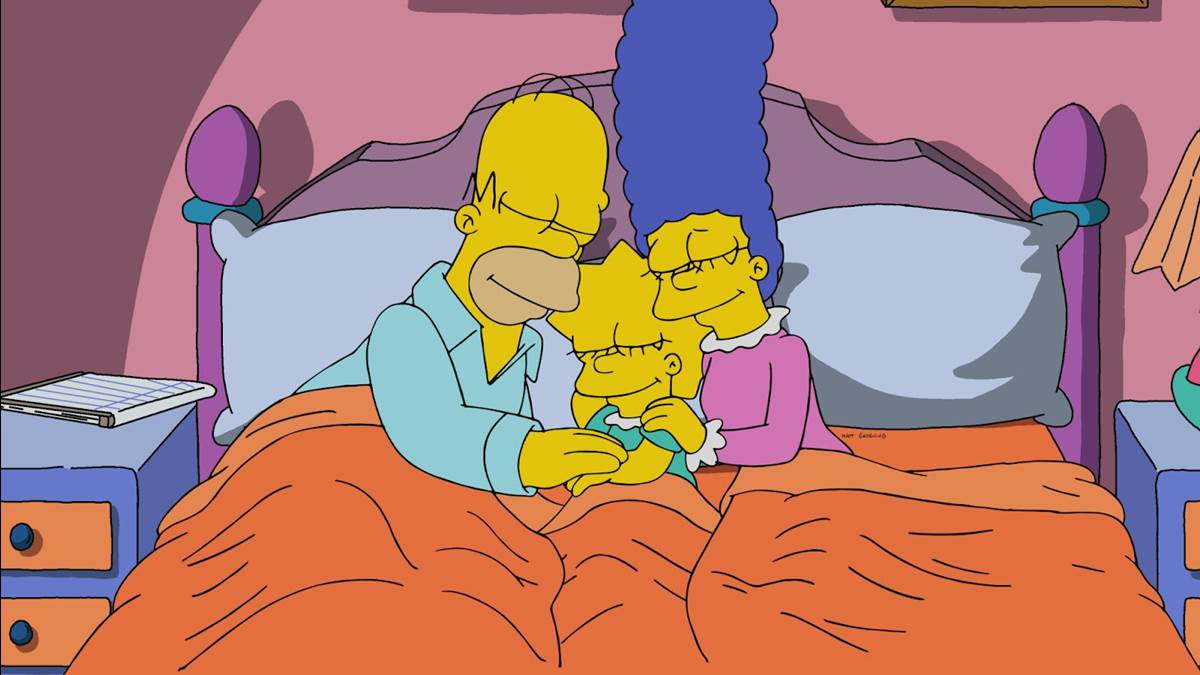