After eight hilarious and heartfelt seasons, black-ish comes to an end on April 19th. PaleyFest honored the show’s impact and legacy with a reunion of the core cast on Sunday, April 3rd at the Dolby Theater in Hollywood, with a screening of the penultimate episode “If a Black Man Cries in the Woods.” The episode finds twins Diane and Jack contemplating splitting up as they choose which colleges to apply to, featuring a montage that shows them both literally growing up on the show. Actors Marsai Martin and Miles Brown both got emotional looking back at their personal and professional growth from the clip. 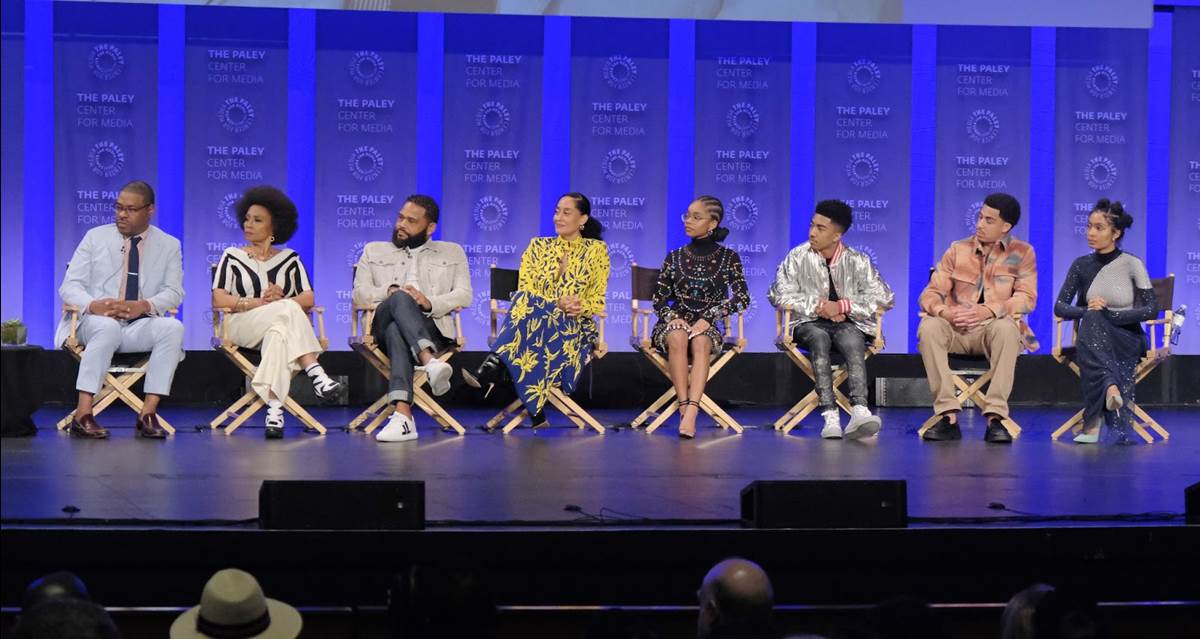 (The Paley Center for Media)

Speaking on this particular episode, executive producer and showrunner Courtney Lilly revealed that “If a Black Man Cries in the Woods” was an idea submitted by Laurence Fishburne last season (Fishburne was the only core member of the Johnson family absent from the panel). His idea was to explore why Black men find it so difficult to say “I love you” to each other, with Pops, Dre, and Jr. forced to confront those feelings during a cabin retreat. Marcus Scribner shared that it’s one of his favorite episodes from the entire series, describing it as a “beautiful experience.” Anthony Anderson shared that this theme is one he hasn’t seen on TV in a long time.

Regarding the decision to bring the show to a close, the heads of the Johnson household were both at opposite ends of the conversation. Anthony Anderson was all for keeping the show going, saying that he feels there are lots more stories that cold be told with these characters. Tracee Ellis Ross, however, shared that eight years has been a long time and revealed that while she loves her on-screen family, doing the show has come with sacrifices for her own family, particularly the amount of time she has been able to spend with her kids.

Yara Shahidi was thirteen when the show started, describing how Kenya Barris valued her input on where the character of Zoey was heading. She thought that her character would fade away when it came time for Zoey to leave for college and never imagined that she would get her own spin-off, grown-ish, or that it would be as successful as it has been on Freeform. What she loves about that show is that it allows her to showcase the character traits that Zoey inherited from her parents Andre and Rainbow.

Jenifer Lewis’ portrayal of Ruby was inspired by her many aunts and her mother. Seated next to Anthony during the panel, the two showcased their hilarious rapport during the panel, interrupting each other’s answers to the crowd’s delight. Michelle Obama guest-starred on the season premiere and Jenifer shared a story about how she first met the former First Lady at Oprah’s house (Anthony made a joke about this) and how she connected with Michele’s mother. When Michele was on set, she told Jenifer that her mother says hello, which she was touched by.

Not only did the cast of black-ish feel like a real family behind the scenes, but the stars talked about how much the crew was a part of that. With many crew members who returned season after season, Tracee Ellis Ross talked about watching many of the black-ish team earn promotions, particularly Black women. Courtney Lilly praised the show’s diversity behind the scenes, saying that he worked with more women behind-the-scenes on black-ish than he had in all of his years in show business combined.

This PaleyFest panel was a joyous one for the cast, who wrapped production on the show months ago. Tracee Ellis Ross made it clear that while she wanted to wrap the show up, it was emotional saying goodbye. She likened doing promotion for the final season to a “Victory lap,” with each one feeling like a reunion for the cast.

New episodes of black-ish air Tuesdays on ABC, with the series finale scheduled to air on April 19th. You can catch up on past episodes on both Hulu and Disney+. “If a Black Man Cries in the Woods” premieres on April 12th at 9:30 pm.