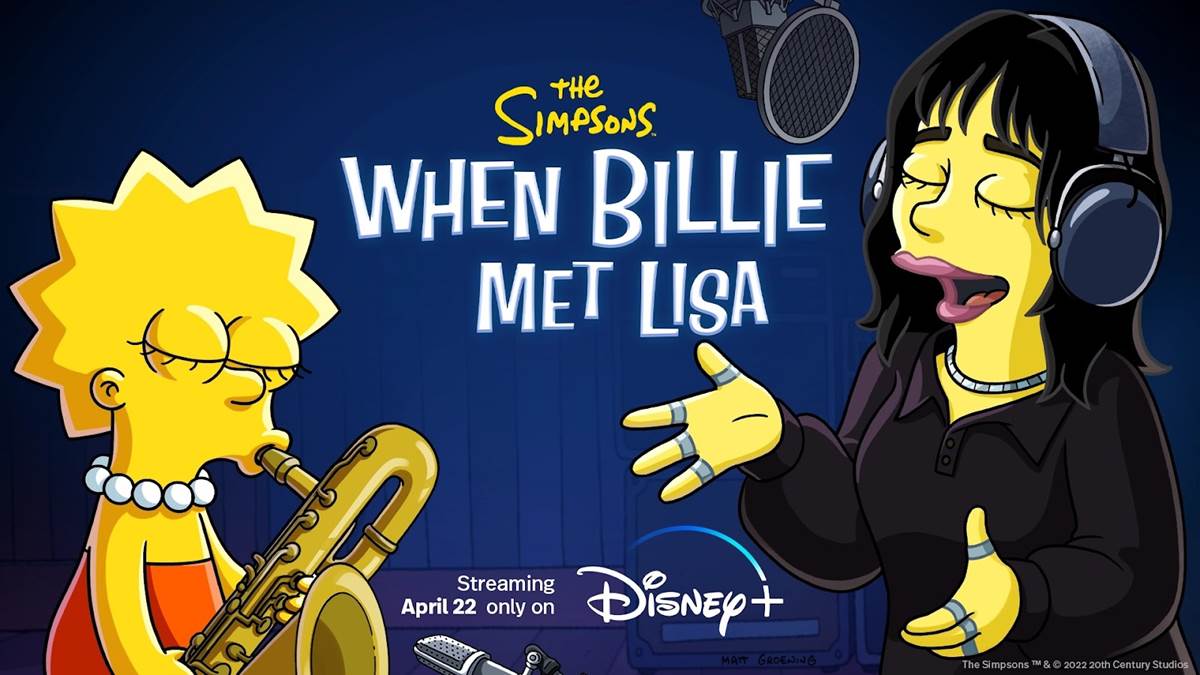 Like Lin-Manuel Miranda before her, musician Billie Eilish is swiftly becoming known for her semi-regular collaborations with Disney. Her concert special Happier Than Ever: A Love Letter to Los Angeles premiered on Disney+ last summer, she and her brother Finneas O'Connell contributed the 4*Town songs to Pixar’s Turning Red, and now she guest stars in the latest Disney+ short from the creators of The Simpsons, which debuted this morning on the streaming service.

“The Simpsons: When Billie Met Lisa” (in the tradition of other recent shorts like “The Simpsons in Plusaversary”, “The Simpsons: The Good, The Bart, and The Loki”, and “Maggie Simpson in The Force Awakens from Its Nap”) sports a running time of just a few minutes, and a sparse plot of Lisa simply trying to find a place to practice her saxophone when Eilish and Finneas discover her jamming under a bridge in Springfield. 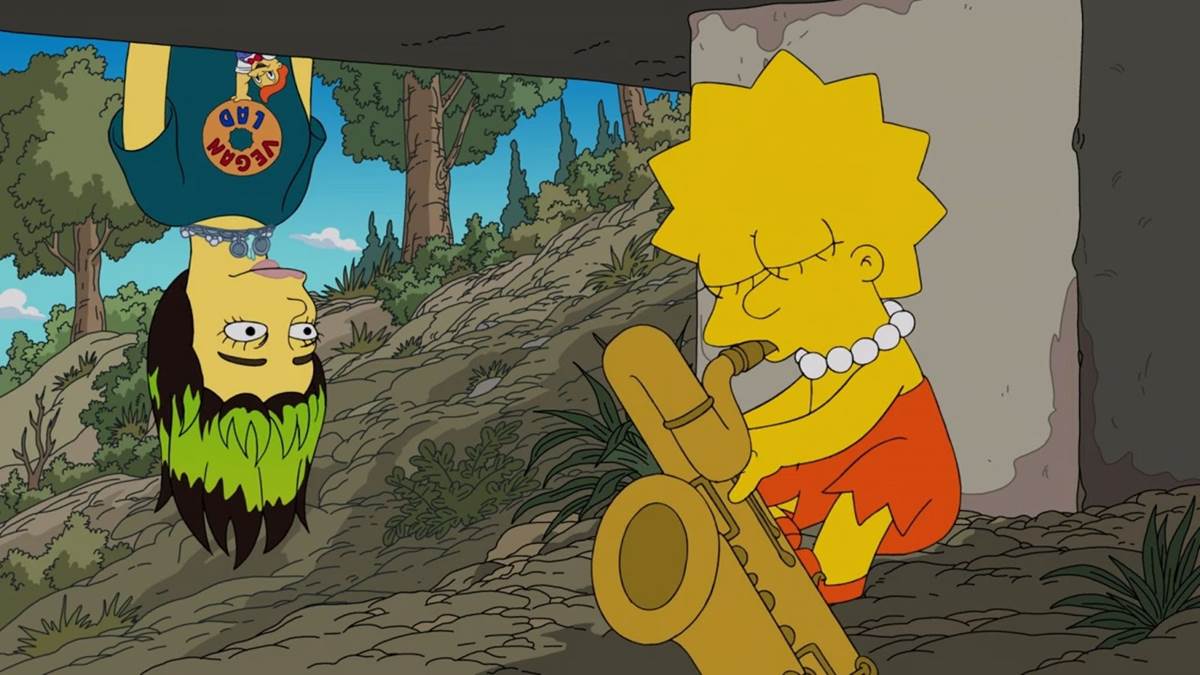 Considering Bart threatened to chop down the tree containing his own treehouse while she was playing sax in there and the elementary school music room was jam-packed with kids who couldn’t practice at home, Lisa is thrilled to have found an appreciator of her talents– never mind that it happens to be one of the most celebrated duos working in contemporary pop. Billie and Finneas invite Lisa to jam with them at their recording studio, but that means having to kick out the World Philharmonic All-Stars they had already planned to record with (one of them claims he hasn’t been paid yet for “that movie on Disney+”). There’s a jarring moment with Eilish coughing up spiders– evidently this is a reference to one of her music videos– and then the newly formed trio get to work collaborating on a cover of composer Danny Elfman’s classic and iconic The Simpsons opening theme music, though Billie calls it “garbage.” The remainder of the short is simply a montage of various Springfield residents reacting to the music– Patty and Selma shutter the DMV to enjoy it, the elderly residents of the Retirement Castle dump out their medication in the sink (which causes Blinky the Three-Eyed Fish to have a trippy response in the river outside), and even the aliens Kang and Kodos play along in their hovering UFO. There’s also a callback to the “Steamboat Itchy” parody from the sixth-season The Simpsons episode “Itchy & Scratchy: The Movie.” The short ends with Lisa and Billie bonding further by comparing their parents’ support– naturally Homer doesn’t quite stack up to Eilish’s dad– and then we get more still-image gags over the end credits like Bart trying to convince Finneas to prank his sister and Moe Syzslak the bartender trying to drive away pesky musical notes with bug spray. The final image is another Disney homage, with the Simpson family dancing alongside Gaston, Ursula, Goofy, Cinderella, Tweedle Dee and Tweedle Dum, and Minnie Mouse as Lisa, Billie Eilish, and Finneas perform onstage. On the whole, “When Billie Met Lisa” makes for a fun diversion that is sure to delight crossover fans of The Simpsons and Eilish, though a few of the jokes do fall flat here and there, and like the other above-mentioned shorts it goes by very quickly. 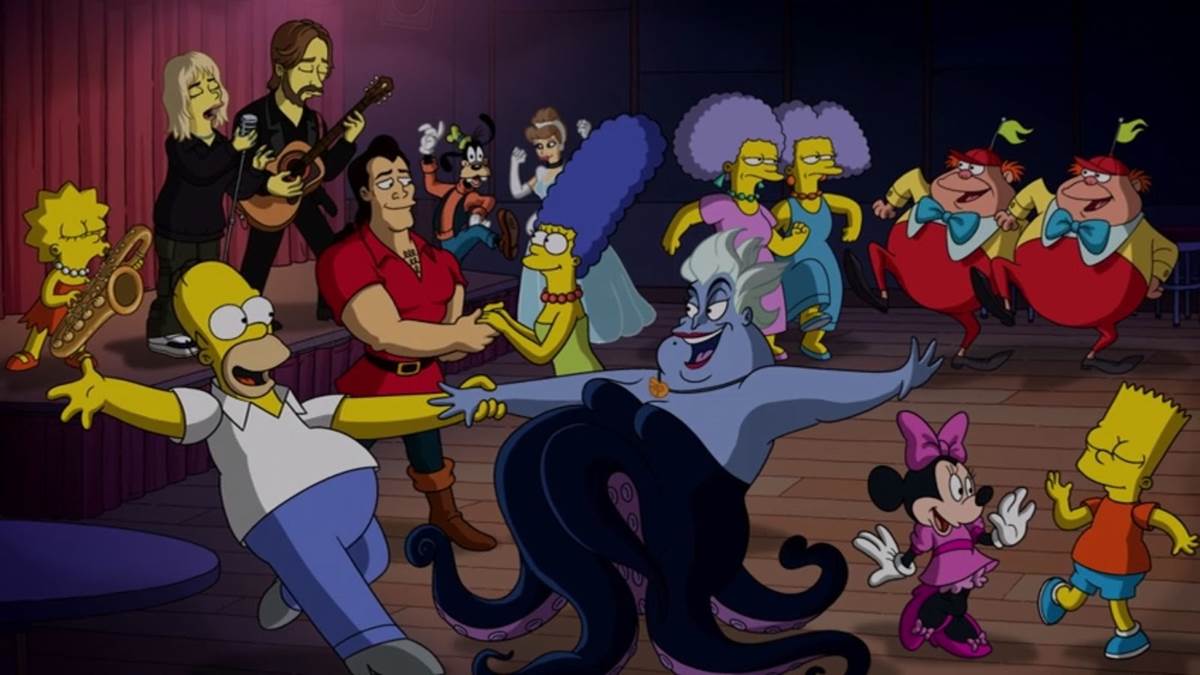 “The Simpsons: When Billie Met Lisa” is now available to stream, exclusively on Disney+.