It’s 1996 and time to revisit the Hollywood Pictures drama starring Liam Neeson and Meryl Streep, Before and After. Is this a classic of the past, or best left in the wasteland of the streaming world? 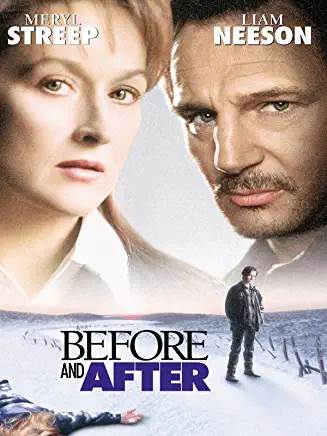 Ben and Carolyn Ryan have it all. A beautiful house, two wonderful kids, and successful careers. Carolyn is a respected doctor in the town and Ben is a prolific artist. They are the epitome of class and distinction. Their perfect life is shattered when police chief Fran Conklin shows up one night looking for their son Jacob.

Jacob isn’t home and as the Ryan’s learn, a local girl named Martha was found dead, and Jacob was last seen with her. While Ben refuses to let the chief search the home without a warrant, the idyllic life the Ryan’s lead comes crashing down around them with one bad decision after another.

Ben rushes out to the barn to discover Jacob’s car has blood in the trunk, and the car jack is also covered in blood. Thinking he is protecting his son; Ben hides the weapon and destroys evidence. The police return with a warrant, searching the home and seizing a mountain of evidence including Jacob’s car.

When Jacob is found weeks later and arrested for the death of Martha, both Ben and Carolyn fight each other on the best way to protect Jacob. After learning from their son that Martha’s death was an accident, the conflict between Ben and Carolyn intensifies. Jacob’s lawyer Panos is thrilled to learn that Martha was pregnant with someone else’s child which would be very helpful for Jacob at trial, but Ben and Carolyn continue to battle about what is truly right for Jacob, and whether they are doing what’s best for their son.

Having Liam Neeson and Meryl Streep in a film together is always a good idea.

Alfred Molina can do no wrong. His version of the criminal defense attorney is typical for this type of film, but Molina makes the role his own, and when he speaks, it doesn’t sound slimy or awful compared to how his character could be portrayed.

Having actors like John Heard and Daniel von Bargen in supporting roles is essential for this to be a 90’s thriller.

While I enjoyed seeing Neeson and Streep on screen together, I really do not like their characters at all. Ben Ryan seems like a great person, but in a heartbeat, he morphs into a controlling, manipulative, and conniving criminal. In his zest to protect his son, without knowing the facts of the case, he destroys evidence, which may have proven Jacob’s innocence.

Not only that, his callous regard for the death of a young girl, at the hands of his own son, makes me wonder if Ben Ryan has a soul. His complete dismissal of Martha and her life to protect his son, is not the example he needs to set for his kids.

Streep is great, even when the film is not up to her standards, however, I’m surprised she took the part of Carolyn Ryan. For most of the film Carolyn is the least responsible doctor I have seen on screen. How can she continue to practice when she knowingly aided the cover up of a crime? The scene between her and Martha’s mother was completely unnecessary and only cements in the viewers mind that Carolyn is not a good person.

The film’s dehumanization of Martha is a sore spot that I cannot forgive. Martha is the victim, but Jacob’s parents act like Jacob is the victim. The fact that the film brought up the sexual history of Martha and was going to use that against her to help Jacob get away with his crime is truly awful. Martha becomes a throwaway victim that never gets a moment of recognition for the fact that her life was taken away from her.

Before and After doesn’t get a rating because I can’t recommend the film.

This movie will force the audience to lose their patience with the ridiculous choices made by the lead characters. A terrible accident is turned into a crime because of an overprotective non thinking parent. The fact that the film tries to blame the victim is awful.

The film is not worth revisiting, and best left in the Disney vault, or disregarded on Disney+.

Next week, a look back at the Goldie Hawn and John heard thriller Deceived.