Disney’s Sketchbook deconstructs the animation process, giving fans a lesson in how to draw a timeless character while also getting to know the dreamer behind the pencil. While drawing along is optional, it is the hope of all involved in the series that you pick up a pencil and try your hand at drawing while you stream the series on Disney+. “When I was a kid in the 50s, in the early 60s, drawing on camera was a big deal,” Eric Goldberg explained, revered amongst Disney fans for animating Genie in Aladdin and co-directing Pocahontas. “The thing that really hit home with me about the series and the core of it is that anybody can draw, and anybody can have fun with drawing. I often think that it's fascinating that human beings are the only animals who were compelled to make a mark on a piece of paper. You know, there are no other creatures on the planet who do that. And so, it's natural for everybody.” 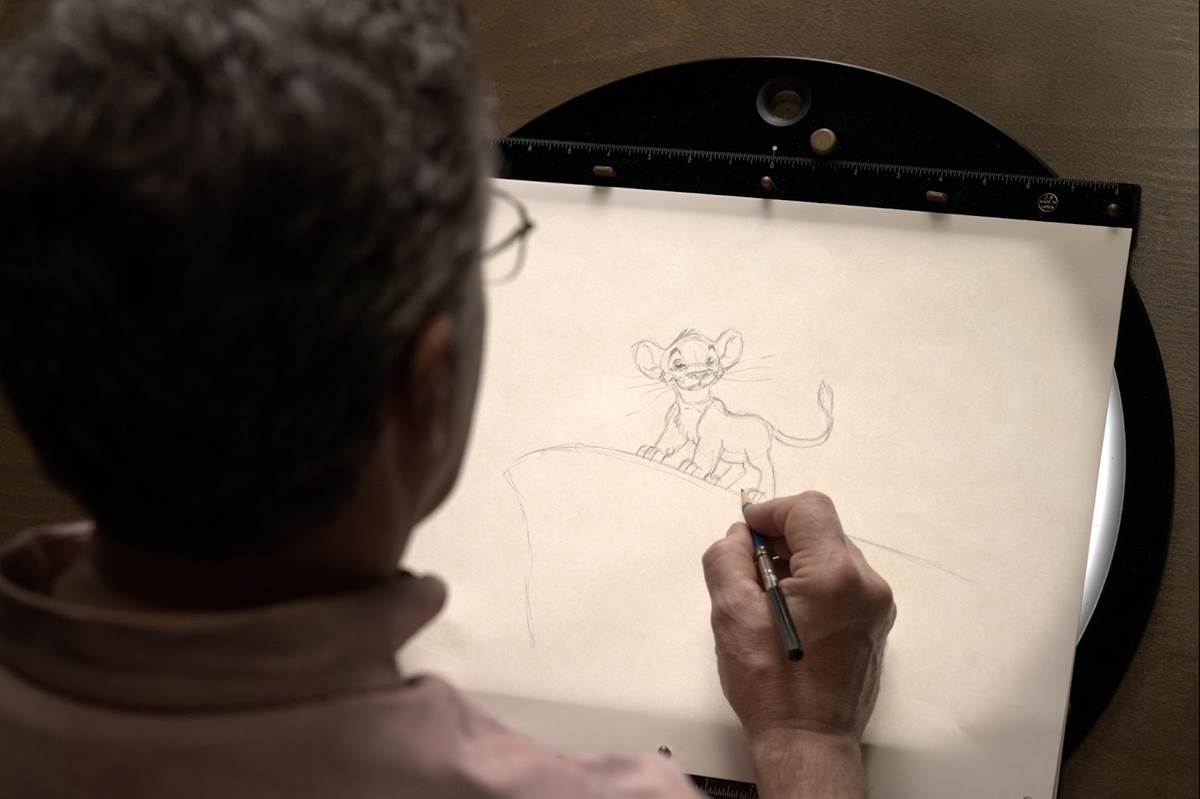 “To me the name Disney is animation,” visual development artist Jin Kim said during a press day to promote the new series. “I grew up watching The Wonderful World of Disney in black and white. And I grew up with all these Disney animations. Since I was young at the time, I didn't know the concept of animation or that I can become an ‘animator’. But just the young me, I just enjoyed that magic. And then I started my animation career. And still, I wasn't sure or confident that in the future someday I could be a Disney animator. That was up to way too far from, you know? But gradually, I felt confident and thought ‘Oh yeah. Yes. Maybe I could be a Disney animator, then that could be my dream come true.’ And after I came here I just, I feel very blessed. I remember the first time I walked into the studio, the people walking around. ‘I know that guy! I know the guy!’ They were the great animators from the art books.”

A person whose name you’ll find in many Disney art books is Mark Henn, who animated Simba in The Lion King in addition to many of the Disney Princesses including Ariel, Belle, Jasmine, Pocahontas, and Tiana. “One of the comments I get a lot these days is people coming up to me and are so happy, they say ‘you animated my childhood’. And that means a lot. And it highlights the impact that our films have and to be a part of that. I started on the tail end of the original generation of artists that worked with Walt, and I was very blessed to be mentored by Eric Larson, who was one of the original Nine Old Men. Everybody at that time was so giving and wanting to pass on all the information that they could so that this thing called ‘Disney Animation’ would live on. And so, it's kind of like passing the baton in a relay race. And now a big part of what I do today, in addition to doing animation, is working with people like Hyun-min, passing the baton on to her generation. And eventually, when I'm long gone, she'll be doing the same thing. But it's just amazing to be a part of that legacy, which is a word we banter about a lot here, but we really mean it. We're coming up on one hundred years and I don't think many studios can match that kind of legacy. So, it's a real blessing to be a part of it.”

Hyun-min Lee originally joined Disney as a hand-drawn animator. “Eric was actually my mentor and it was just like a magical dream when I was here the first day,” she recalled. “I was drawing characters that I loved and all these artists that I grew up watching and idolizing, all they wanted to do was help us learn and grow and succeed. And when we were making the movies, all everyone wanted to do was just put their heart and soul into it and make these characters so sincere that when the characters go out into the world, we actually kind of disappear. The people who made it disappear and the characters are living on their own. And it's always fun after the film is released, we'll sneak into the theaters and sit in the back row and watch people react to it. It's such a thrilling and proud moment that I got to be part of something that makes people laugh and cry and fall in love with and root for. [It’s] something that will be passed down through the generations. From a childhood dream that became a dream come true, it's just an ongoing dream always to work here. So that's been wonderful for me.” 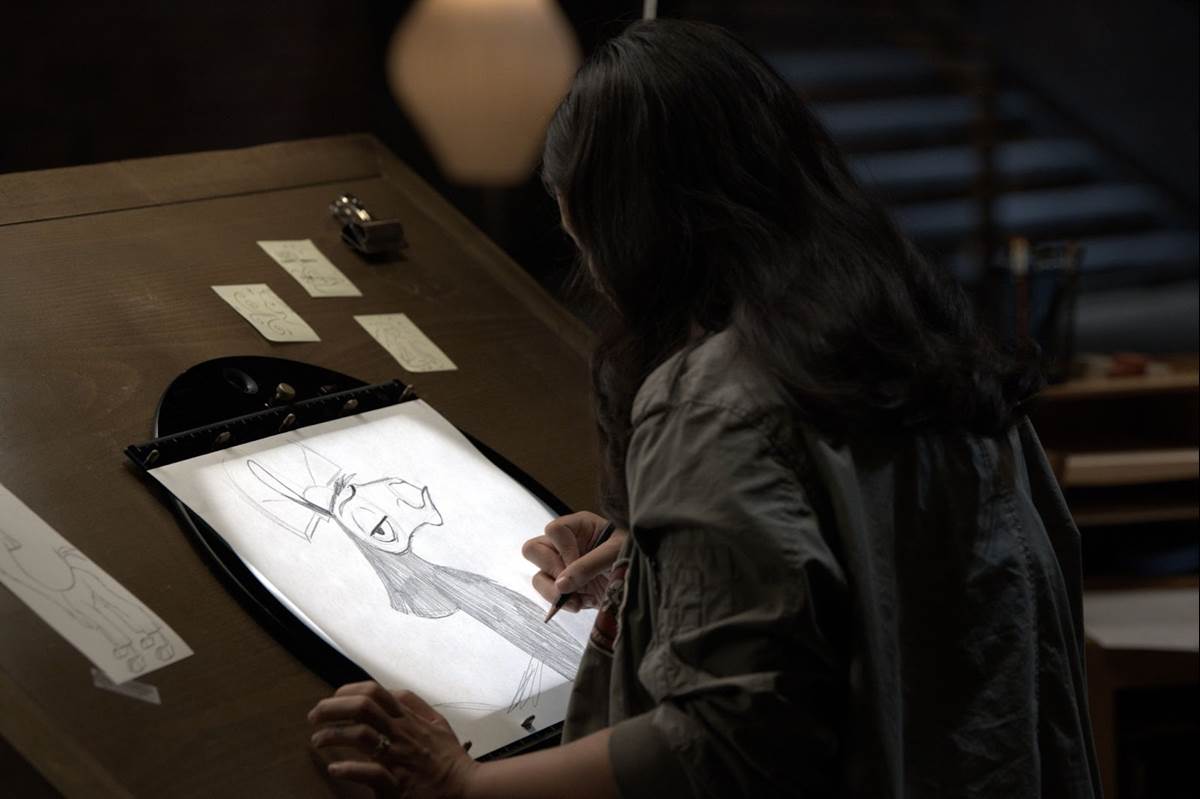 Representing the next generation of dreamers at Disney Animation are story artist Samantha Vilfort and animator Gabby Capili. “We grow up watching these films and watching a lot of Disney Animation and going, ‘well, I don't know if there's a path to that,’” Samantha shared of feeling like getting to Disney was an impossible dream. Through watching how-to-draw videos, she realized that there was a path toward Disney and now she can pay it forward. “The thing that I grew up with, I could potentially do this for other people, just people casually at home with their kids and everything… It was a really big honor to get to do it.”

Being an artist came more naturally for Gabby, but it was a specific character that drew Gabby to the studio. Growing up in California, young Gabby felt pressured to choose a Disney Princess character to identify with on family visits to Disneyland, something she found difficult to do. “I know now that I was a gender non-conforming queer kid,” Gabby explained. “We didn't have that language at the time. So, I just didn't relate until Kuzco. And there were jokes about how to be a princess, you have to have a villain after you. You have to get trapped. You have to be saved by a man. You have to be in mortal danger. And Kuzco fits all of those. Like if you go through them, Kuzco fits every single point. So, there was just something about him. And that was the first Disney movie that I saw in theaters. I was pulled out of school to go and see it for my birthday. So Kuzco is so special to me. I've seen that movie like a million times, I can quote it line for line.”

At the beginning of this story, Eric Goldberg said that anyone can draw. For executive producer Jason Sterman, who admits to having felt accomplished with a stick figure drawing as a child, he found this to be true. “Watching them all draw, there is this sort of thing when we were making the show going like ‘I think it's great that you guys can draw that. Well, there's no way that I'm going to be able to replicate that,’” Jason shared. “And that was the hard thing going into the edit room going, ‘OK, is this actually going to work?’ And the thing that was interesting is it did. We all would put it to the test.” One of the camera operators had watched Jin draw Captain Hook so many times while shooting his episode that when he got home, he decided to try drawing the character, bring his masterpiece in to work the next day to show it off.

Unleash the dreamer in you and draw along with these Walt Disney Animation Studios artists with Sketchbook on Disney+ beginning April 27th.