“The fan reaction has been unlike anything I've experienced in my career,” explained Anson Mount, who stars in the new Paramount+ series Star Trek: Strange New Worlds, which premiered today. Mount plays Captain Christopher Pike, a character first created for the unaired pilot of the original Star Trek, replaced by Captain Kirk in the final series. That pilot was edited into a two-part episode called “The Menagerie,” so fans have known about Captain Pike for a long time. Mount first portrayed the character in Season 2 of Star Trek: Discovery, but is now at the helm of the USS Enterprise in his own series. During a TCA press conference for the new show, Anson shared that he was a lifelong fan of Star Trek, but never expected that he would get to play in this universe. “The writers have already done a magnificent job of establishing this Captain as being his own iteration of what a Starfleet Captain should be, independent of all of the other Captains we have had so far,” he added. 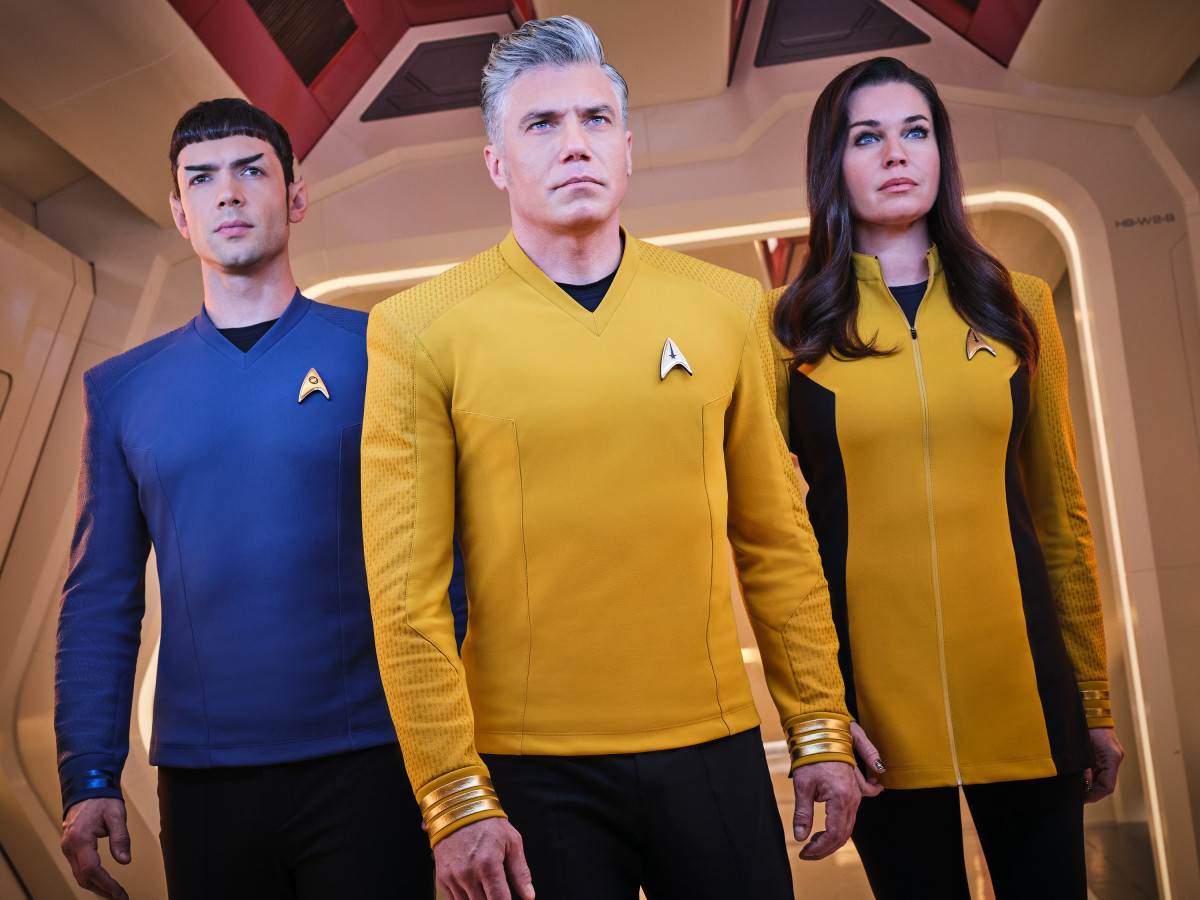 The creative team behind the series is leaning into the legacy of the original series, creating a new story set before Captain Kirk’s adventures. “I think anyone who has ever traveled in the world of Star Trek knows they're inheriting canon,” executive producer Alex Kurtzman shared about how what happens on Strange New Worlds impacts the other Paramount+ exclusive Star Trek projects. “We have writers on all the staff that keep track of it. We have a frequent showrunners’ meeting where the showrunners of all the shows get together in advance of the scripts they're about to write as they're starting to break seasons. And they all share ideas and information about what they're doing so that we can stay ahead of any problems that may come up so we're not stepping on each other's toes.”

Speaking of stepping on toes, the original pilot that introduced Captain Pike also featured a woman as his first officer, which the show’s original network asked to change. Bringing this character back is Rebecca Romijn as Number One, aka Una, who explained why it was important for her to take this role. “There is a little bit of being a mom, especially of daughters, that plays into the direction that my career has gone,” Romijn revealed. “The female characters in these genres are fantastic and strong and they appeal to my daughters. And if I'm going to be spending time away from them, I want them to be able to see what I'm doing and appreciate it. And they do. I take them into consideration a lot of the time.”

Sharing Rebecca Romijn’s feelings about the depiction of strong female characters is Celia Rose Gooding, who takes over the role of Uhura from Nichelle Nicolas in the original series. “There are so many incredible things that Nichelle brought to this character,” Gooding said, pointing out how groundbreaking the role was in 1966. “Something that Nichelle had with the original series’ Uhura was a level of understanding and clarity. And while that is incredible to see, I think that part of her humanity is the other side of that coin and seeing the parts of her that aren't really sure and seeing the parts of her that have an opportunity to ask questions and make sense of it as we go along. That's something that I'm super excited to introduce. I think having an opportunity to represent such an iconic character in a more multifaceted way is an honor for me as an actor. And it's also really exciting to hear what other people think of it and to see the other sides of Uhura that we didn't get to see because of the limitations for Black women in film in the '60s.” “The ears are burdensome in many ways,” shared Ethan Peck, who dons one of Star Trek’s most recognizable features, Vulcan ears, as the legendary Spock, whom he gets to put his own spin on. “It's finding the balance between his human and emotional sides, human and Vulcan sides, between his deeper emotional sides and his deeper logical sides. And I think we go much more into his inner life and world, and it feels as though we're treading ground that's not been tread before. It's a very delicate dance that I'm attempting with the wonderful cast and crew that we have.”

Also joining this mission to encounter strange new worlds is a character named La’an Noonien-Singh. “She's related to Khan,” executive producer Akiva Goldsman confirmed, another connection to the original series. “We have tried to harken back to some of the values and styles of the original series, the first Star Trek that got those of us who are a little older ignited on our Star Trek journeys. In doing so, we've tried to look back and interpolate some parts of the original series that might not have made it to the screen, some things that might have happened just before Jim Kirk took over the Enterprise. And as such, some familiar faces are finding new life.”

Fans of the original series will also be excited by the return of the original series’ self-contained episode style. “The thing that I would say about serialized storytelling that's really a gift is we have this incredible cast, and it allows us to zero in on different actors, different characters, and see the world of the Enterprise from completely different perspectives in each episode,” executive producer Henry Alonso Myers concluded. “We have an opportunity to do that, and that's one of the great things about doing this kind of storytelling. I hadn't done this in a while, and it's been unbelievably refreshing to do one-off stories.”

The adventure begins Thursday, May 5th with the launch of Star Trek: Strange New Worlds only on Paramount+.