It was a morning of acronyms at Annecy Festival’s “Share With” presentation from The Walt Disney Company – EMEA (Europe, Middle East & Africa), put on through MIFA (Market International Film Animation). Lots of companies hold this type of presentation every year, aimed at hopeful future storytellers who dream of creating their own animated content. What makes Disney EMEA unique is that, unlike Disney Television Animation, they’re mostly in the business of helping to finance coproductions produced in the specified regions in exchange for Disney gaining access to the content, either through linear networks or on Disney+. 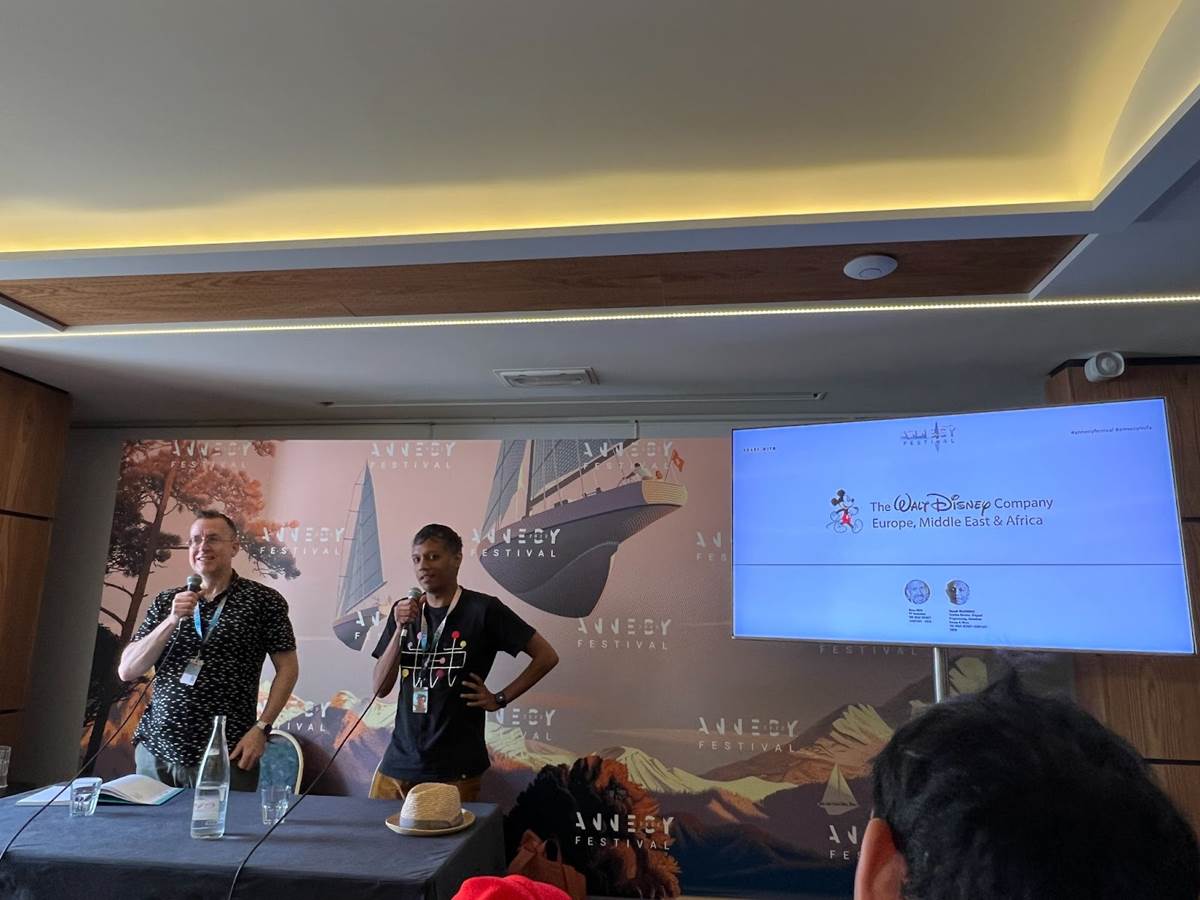 Orion Ross (VP Animation) and Shamik Majumdar (Creative Director, Original Programming, Animation Europe & Africa) traveled from London for the first of several presentations, including a press conference tomorrow at which Disney will be showcasing several upcoming projects. These will include The Unstoppable Yellow Yeti (Gigglebug Entertainment), Vikingskool (Cartoon Saloon), and Ghostforce (Method Animation). With worldwide hit collaborations that include PJ Masks, Miraculous: Tales Of Ladybug & Cat Noir, and Gigantasaurus, Orion and Shamik are always looking for the next big thing.

Disney EMEA is primarily looking for animated series for kids and families. This includes preschool content aimed at around age 5 in genres like aspirational adventures like PJ Masks and grounded comedies like Bluey. For ages 6 and up, they’re in the market for comedies and adventure series. At its core, the shows should have high-quality production values and be infused with heart and decency.

Just because Disney is in the name doesn’t mean they’re looking for content similar to what Disney already produces. In fact, the opposite is true, with Orion and Shamik saying that they’re trying to surprise audiences with content that doesn’t fit the mold of what they think of as Disney while still retaining the heart, decency, and authenticity that the company is synonymous with.

“Don’t pitch us anything based on a Disney IP,” they warned. Disney EMEA may be the division behind Chip 'n' Dale: Park Life and 101 Dalmatian Street, but with The Walt Disney Company being so big and vast, they warned that any IP-based concepts typically have other projects in the works. In the case of these two shows, the concepts started in-house and Disney EMEA found studios to partner with based on their strengths, such as Xilam, who already specialized in non-verbal slapstick comedy and was a perfect fit for Chip 'n' Dale: Park Life.

During a pitch, in addition to having characters and a premise defined, Orion and Shamik said it’s important to sell the team working on the project. They’re often just as interested in the talent behind the scenes as they are a great idea. This can be especially helpful when an idea needs a little more development time, although they cautioned artists not to be too willing to change everything. They need to know that a showrunner will be consistent with their vision during the production.

The dream scenario is that a great pitch comes in with a studio already attached that just needs Disney for financial backing. Disney typically provides about half the budget, but they also contribute notes on each story to make sure it meets their quality standards. There have been a few rare cases where a great pitch came directly to Disney EMEA, who then connected them with a studio that could produce their vision

During a Q&A, one of the most obvious questions was regarding how someone gets to the point where they’re sitting across from Orion and Shamik with a pitch. Disney EMEA doesn’t accept pitches from just anyone, so they suggested that hopefuls start by contacting the Disney content and programming executive assigned to their country or region. Ask for a conversation or a meeting and always ask if it’s okay to share what you’re developing. They act as the gatekeepers, but if they believe in your talent and idea, they will connect you with them. Orion and Shamik also said that you shouldn’t be afraid to follow up as they are both very busy and sometimes things fall through the cracks.

A lot of hard work and talent goes into creating an animated series. We will have full coverage of the announcements from Disney Television Animation and Disney EMEA after their panel tomorrow. Click here to follow all of our coverage from Annecy Festival.