Holey Moley: Fore-Ever is back as we get closer and closer to this season’s finale where winners compete for the $250,000 grand prize. But first, a bit of a recap is provided continuing the overarching story of the season as Rob tries to get the show renewed with the help of the Muppets, and unlike last week with the tease of more Miss Piggy, this week lives up to that promise. 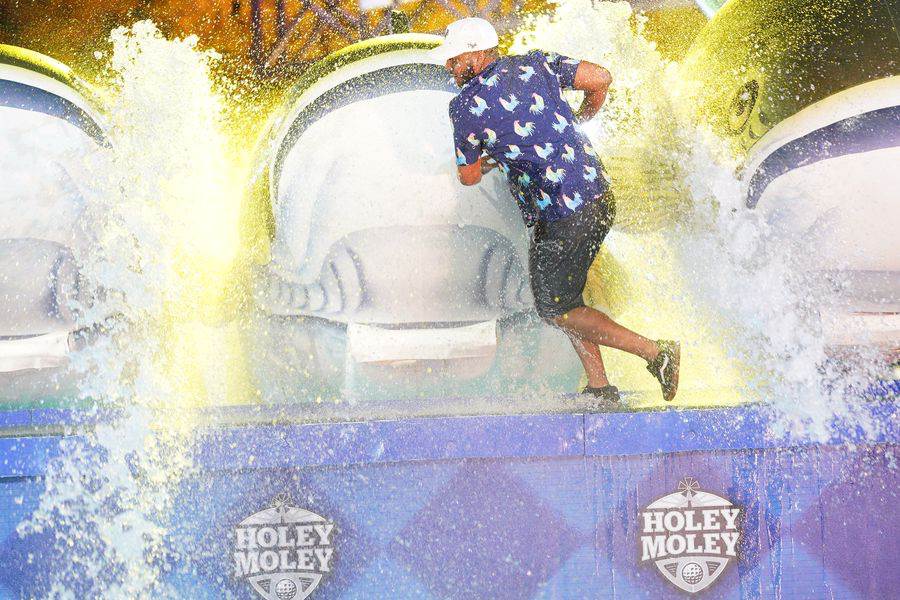 But first! More extreme mini-golf that takes us to The Fishing Hole, presented by TakeMeFishing.org, who apparently now has Joe’s phone number, providing an award winning double take tat is sure to win an Emmy or something. Abai is going head to head with Alexandria, who had a decent putt but just seemingly walked off the plank and into the water avoiding the rocking fish altogether, incurring a stroke penalty. Abai didn’t fare much better, landing his shot much further away from the hole on the green, but worse yet, he can’t swim. He also finds himself in the water fairly quickly, but don’t worry! Lifeguards are nearby. Thanks to the better putt, Alexandria wins the hole. Next, we head over to PoleCano with Ashley and Will. Both putt up the board and find themselves in unfortunate positions on the sand, but it’s their rides on the zip line into the pole that have everyone’s attention this-go-round on the hole. Will launches out toward the pole, but quickly jerks back and has a straight shot landing terribly on the water. This prompts Joe and Rob to discuss what is with this hole this year, because as devotees may recall, everyone is getting it done with ease, or takes some of the hardest hits on the show this season. That leads us to Ashley’s ride, where her grip was so strong she didn’t even release on the first launch, gets pulled back and launches again, missing most of the poll but close enough to land on the base of it on the small of her back in one of the hardest hits I’ve ever seen on the show. Clearly, Rob felt the same as he covered his face and kept asking Joe if she surfaced yet. Luckily, she was okay but Joe suggested a chiro appointment soon and I couldn’t agree more. 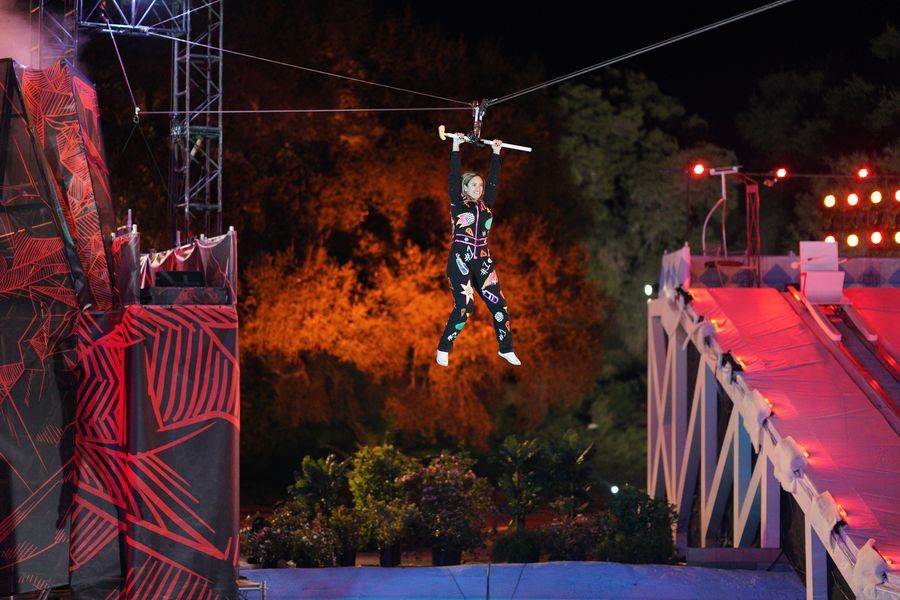 After a brief commercial break, we get a wrap up (again, because this time nobody really cared about the putting) leading up to Will winning the hole and moving on to the next round. Joe and Rob are now joined by NFL star Travis Kelce in the booth, perfect to commentate on The Distractor since we saw him appear on that hole a few episodes ago as the distractor himself. 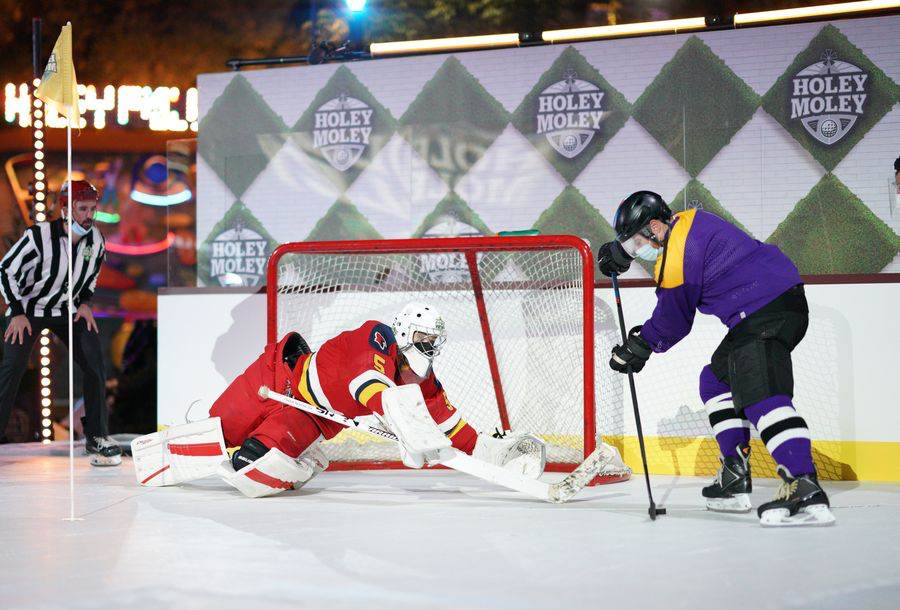 Obie and Matthew are going against each other here but there is already a lot of hope for one of the contestants as Matthew is a legacy golfer, with both his brother and mother winning episodes of Holey Moley in seasons past. I’m calling shenanigans here because I’ve watched McMillions on HBO Max, and this is starting to reek of that whole winning high-value prize pieces in the same family scam from the popular McDonalds game of the 90s. Anyway, the wall rotates to reveal a hockey match surrounding the hole that quickly escalates into a trademark hockey fight, complete with blood on the ice. Matt misses his putt but Obie sinks his even with all the carnage, and puts an end to the suspicious golfing family. 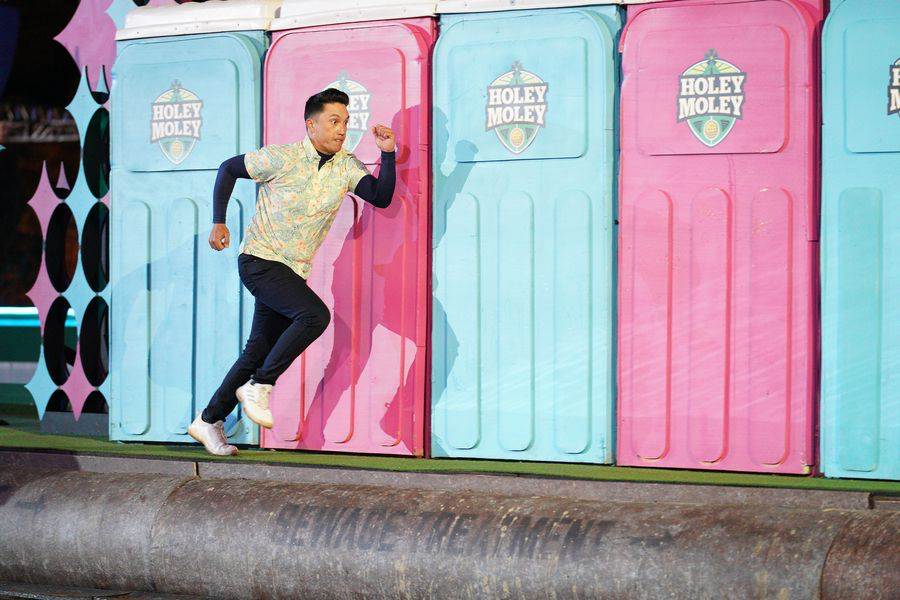 It’s time to head over to Hole Number Two, with Francis and Lisa taking on the porta-potties and sludge. Francis putts but the ball kicks off a porta-potty door halfway down and ends up in the sludge below. His sprint is impressive and takes him quickly down the lane but the second to last door flings open and knocks him into the muck to join his Francis putts but the ball kicks off porta potty and into the sludge below. Lisa takes her swing and leads to arguably the worst tee shot in the hole’s history, quickly ricocheting off of the closest door to her and into the muck and sludge below. Her sprint isn’t much better and she soon finds herself panicking in the sludge and in one of the most amusing moments this season, finds herself being compared to the T-1000 in Terminator 2 when he finds himself in the molten steel. However, she redeems herself with her putting abilities on the green. Meanwhile, Francis is asking Course Marshall Joe if he can touch his ball to line it up better, confusing pretty much everyone, and invoking the “No-Touchy-Touchy” rules outlined in all the Holey Moley paperwork. He misses his shot and Lisa wins the hole. As promised, we see more of Miss Piggy and Rob, but we learn that Rob is trying to design the most epic version of The Distractor the show has ever seen. But when Piggy asks what the wardrobe will look like, she feels it’s a bit too basic and we find Rob (and ourselves) listening to a neverending list of outfit suggestions. Round Two begins and we head over to The Pecker, where we see Lisa and Obie take on the giant bird. Lisa did not putt her ball into the preferred channel but lucked out and found herself with a pretty well placed lie. However, her athletic abilities and coaching could not prepare her for her jump onto the giant bird and she quickly found herself in the pit below. Obie however, found himself in the preferred channel and scored the first hole in one on the Pecker instantly winning the hole, but he found himself jumping on to the bird anyway just for fun. More of Miss Piggy is seen, this time with Uncle Deadly, who is speaking on behalf of Riggle, suggesting that maybe she should sit this one out since she is so busy, and seek the help of an understudy, who appears to be sideline reporter Jeannie Mai. I’ll let you guess how well that idea went over. Over to Holeywood for the second half of Round Two, with Will and Alexandria. Both players found themselves not maneuvering the accelerated red carpet to the best of their abilities and quickly found themselves in the water, though Will came close. Both Players must now putt from the Rob Riggle Drop Zone and the putting is close from both competitors, but Alexandria misses her second putt after her ball bounced over the hole with too much pepper in the gumbo, and gives Will the chance to move on to the final round. The winners of tonight are now headed to Big Foot Wedge. Obie takes his shot, hoping for another ace but doesn’t quite get what he was hoping for, hooking off the ramp and heading in the opposite direction of the hole. His ride on the giant Bigfoot Foot doesn’t work out as well either as he jumps a bit too late (or maybe early) and smashes into the golf ball landing pad. Will finds his ball getting a far better lie after its ride down the ramp, but his jump is substantially worse than Obie’s not even coming close to the golf ball landing pad, prompting strategic comments from Joe about where players should place their feet when jumping. However, that far better lie secures him the win with a score of 3, and he takes home the golden putter, the plaid jacket, and moves on to the season finale for a chance at $250,000. Of course, he also gets to meet “Stephen Curry,” still missing after being kidnapped by Pepe the King Prawn, but rest assured. Rob and Joe remind us that Stephen Curry is every bit as real as a mall Santa Claus. Holey Moley: Fore-Ever! Airs on Tuesdays on ABC, and is available the next day on Hulu. Church.
Sign up for Disney+ or the Disney Streaming Bundle (Disney+, ESPN+, and ad-supported Hulu) now