“The original idea for [The Bear] came from Chris Storer years ago because these themes and these difficulties are part of the restaurant industry and part of all small businesses,” co-showrunner, executive producer, writer, and director Joanna Calo said about the new FX series The Bear. Set in the kitchen of a family-run Chicago restaurant, the project took on even more significance following a pandemic that saw many restaurants close permanently. “It was the desire to create a show that authentically showed what a kitchen is like and told stories about the people that feed all of us.” And to do that, the cast had to do all their own cooking on screen. 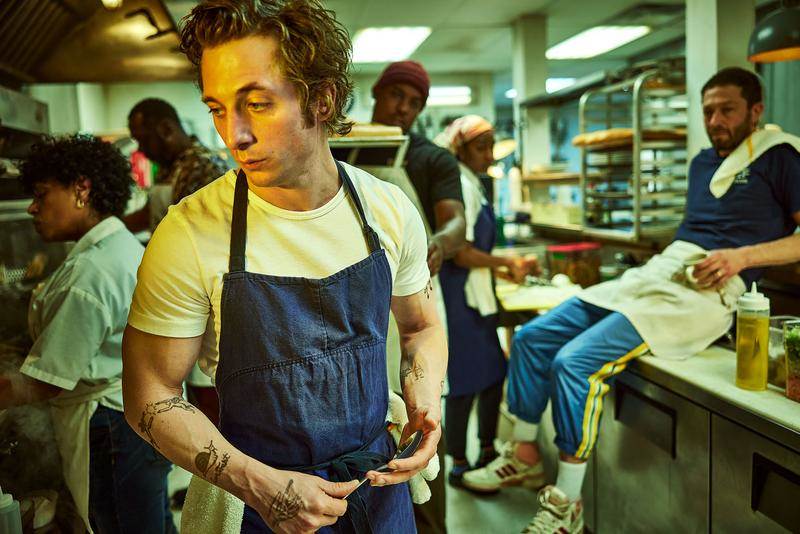 “The prep I did was pretty extensive,” actor Jeremy Allen White said of the work required to play Carmen ‘Carmy’ Berzatto, a professionally trained chef who leaves a prestigious restaurant when he inherits The Original Beef of Chicagoland. “I was very much useless in the kitchen. I'm okay now. That's due to going to a culinary school in Pasadena (Institute of Culinary Education). I worked in some really lovely restaurants, mostly a restaurant called Pasjoli in Santa Monica. I spent a lot of time there with chef Dave Beran.”

“I cook a lot,” revealed Ebon Moss-Bachrach, who plays Carmy’s cousin Richie, a character who believes he should’ve inherited the restaurant. To bring Richie to life, however, Ebon didn’t get to show his cooking skills on set. Still, the actor took advantage of filming in Chicago to explore the city’s own unique cuisine. “My revelation about food with being in Chicago was probably hot dogs. It is not a food that I really thought about or ate much before. When you get to Chicago, if you get a salad, it is like lettuce and a couple hot dogs. I was maybe not particularly open-minded to it, but they wormed their way into my heart and mind. I ate three hot dogs at the airport when I was leaving Chicago.”

Many of the scenes take place in the chaotic and frenzied kitchen, the stress of which got to the actors. “What was genius I feel like came from the designers were able to make that kitchen so small and so tight, but also be a place where a camera could come through and work,” actress Ayo Edebiri shared, who plays Carmy’s newly hired trained chef Sydney Adamu. “Because there were lots of tensions, once cameras cut, we were all very considerate to each other and very soft with each other. Once a week we would have a big dinner and then sleep for two days.”

The series presented a new opportunity for Lionel Boyce, who had never worked on such a professional television production before. “It was really intimidating because everybody is a really good actor and I am, like, this fool over here, hoping I don't mess everything up,” the actor shared of his experience playing Marcus. “I really liked it, and I learned a lot from every step of the process. I was trying to ask questions whenever I could, just watching how everyone gets prepared to do whatever they are going to do for their role. I have just been watching a lot and just learning what can I take from this and apply forward when I make stuff.”

“I have been in the restaurant business for 15 years, and 20 years in the restaurant industry,” co-producer Matty Matheson shared, who also acts in the series as Neil Fak. Although the kitchen is a set, everything in it was real, with the actors doing all their own chopping and cooking on screen. “I started having kitchen dreams, which I haven't had in a very long time, but being on set brought me back to having those weird dreams that are very close to the nightmare scenes in the show, where I used to have these dreams constantly of chits continuously coming in, me running to the walk-in and everything was spoiled. We would open fridges — there was nothing there. Everything was rotten. And I started having those again because it is just real. It was quite a trip, to be honest. But the set and that constant friction, you are just in an uncompromising kind of place at all times.”

Step into the fast-paced kitchen of The Original Beef of Chicagoland in FX’s The Bear, now streaming on Hulu.