This week we flash back to 1997 with the Hollywood Pictures government thriller Shadow Conspiracy. Charlie Sheen plays the special assistant to the president, and only he can stop an unknown threat deep within the government. Who can he trust, and can the madness be stopped in time? The fate of the world rests on Charlie Sheen’s hands. 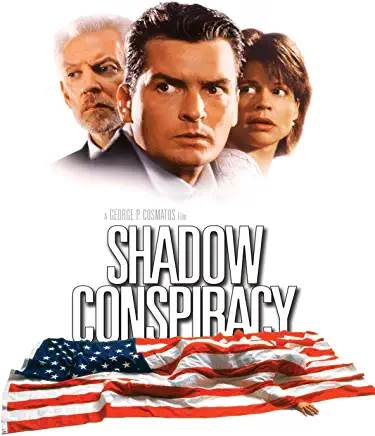 Bobby Bishop plays the special assistant to the President of the United States. He’s at the top of his game, from smoothing over trouble with congressmen, and even getting ahead of reporters like Amanda Givens, Bobby is the best at the public relations game.

When an old friend warns him of a conspiracy inside the government, Bobby is on the run, without much hope for salvation. With the help of reporter Amanda Givens, the two work together to unmask the conspiracy, and save their own lives.

As the truth is revealed, Bobby must act quick and take matters into his own hand, or else the shadow conspiracy will win, and Bishop will be dead.

Donald Sutherland is always great. No matter the film, he seems to bring some levity and joy to any role and seeing him on screen was great.

Stephen Lang has no dialogue, but he plays a perfect assassin. One of the highlights of the movie.

Sam Waterson is perfect as the president.

Oh boy! Shadow Conspiracy suffers from a lack of coherent story, and from actors with real chemistry. It would be easier to get attached to the fate of Amanda and Bobby, if there was any real connection between the two on screen. Linda Hamilton is great, but Charlie Sheen doesn’t exude the necessary qualities that are needed to make Bobby Bishop a compelling character. It’s hard to care about their relationship and their success when the viewer knows these two would never sustain a long-lasting relationship.

The shadow conspiracy is hardly a shadow. It feels like when all the bad guys are revealed the real shadow conspiracy is Bobby and the President. This conspiracy is so big and comprised of so many people, I just wonder how it was kept secret. The central point of the narrative is so ridiculous that it makes the dramatic parts of the film seem preposterous.

I feel like Shadow Conspiracy was delayed for two years after filming wrapped because the producers knew that this movie would bomb, and it did. The story is out of focus, lacks direction, and the characters could have been better cast.

When it’s a struggle to focus on a movie, then it’s difficult to recommend. I sat through Dumb & Dumberer: When Harry Met Lloyd and didn’t walk out of the movie theatres. I use this metric to measure against my recommendations, and to be honest, I just cannot recommend anyone watch Shadow Conspiracy. There is just not enough to sustain interest in this movie.

Next week, Keenan Ivory Wayans in A Low Down Dirty Shame.