The UFC returns to the O2 Arena in London tomorrow for a great night of fights that is just loaded with ranked competitors up and down the card. The main card features ranked fighters in three different divisions and some some very tough contenders in two more.

A championship opportunity could be up for grabs when two of the top six heavyweights in the world clash in the main event. Plus, A couple of tough middleweights will meet with one looking to climb the rankings and the other looking to crack them and a top up-and-coming lightweight will look to continue to amaze. It’s the most dangerous bowl cut on Earth. Paddy Pimblett returns to the octagon after a dominant performance in March that brought his record to 18-3 and his winning streak to four. Pimblett has looked great in his first two UFC fights, finishing both of his opponents in the first round. A win here for the 27-year-old could vault him into the rankings and really put him on the radars of a lot of lightweight contenders.

He has a tough task in front of him though as Leavitt comes into this fight with a 10-1 record with 6 submission victories. He’s also won his last two bouts in the octagon, one of them with an inverted triangle choke. This will be a step up in competition for Leavitt, who is a fairly heavy underdog in this one, but that also means it’s a big opportunity.

This is a very interesting matchup because the ranked and favored fighter, Hermansson, comes into it having lost three of his last five. He’s faced some of the toughest guys in the division and still sports a 22-7 record, but he’s clearly been struggling a bit as of late and he needs to build some momentum if he wants to climb an higher than the eighth spot in the rankings, which he currently holds.

Meanwhile, Curtis, the unranked fighter in this bout, is riding an eight-fight win streak and is coming off of a win less than a month ago. Curtis sports a 29-8 record with 16 knockouts so it’s no secret what he is going to be looking to do in this fight. Luckily for us, Hermansson likes to stand and bang as well, so this should be a fun one in the middleweight division. 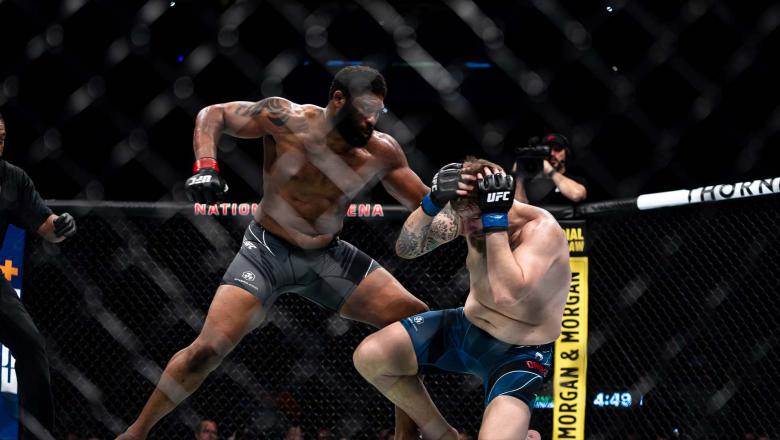 The heavyweight division has a very strong champion in Francis Ngannou, but the rest of the class leaves a lot of room for movement. That means this main event is a great opportunity for Blaydes and Aspinall to prove they should be next in line for a shot at the belt.

He is a list of everyone who has beaten Curtis Blaydes: Derrick Lewis and the aforementioned dominant champion Ngannou. That’s the whole list. Clearly, Blaydes is one of the best in the class and his knockout power is the reason why. With a 16-3 record, Blaydes has 11 knockouts under his belt. Most recently, he dropped Chris Daukaus in a main event in March. Blaydes can put anyone to sleep in a blink, all he has to do is connect.

The same can be said though for Aspinall, who comes in with a 12-2 record and nine knockouts. The difference though is that Aspinall also has three submissions on his record, most recently, an armbar of Alexander Volkov in March. That grappling could be the difference if Aspinall chooses to employ it rather than engaging Blaydes in the striking game. Either way, the first guy to make a mistake is likely going to regret it.