“The way that Chris [Sheridan] has structured the season, we have people waiting on bated breath to come in and see what happened and what's transpired,” said actor Corey Reynolds about the hit SYFY series Resident Alien. Fans have been waiting since March 16th for Season 2 and the wait is finally open, with the remaining eight episodes airing on Wednesdays at 10/9c beginning tonight. During a TCA presentation, the cast and series creator got together for a look at what’s in store in the rest of the season and beyond. “We left them wanting more… We are able to take a break like that and still have our audience come back to us and be excited to return for the second half.” 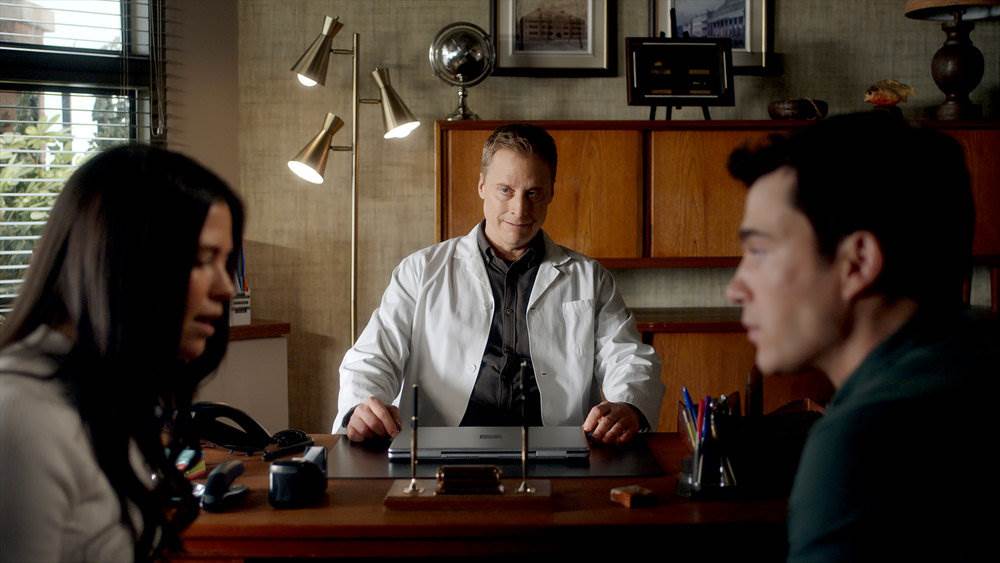 Several reasons were given for the break, including a longer season (16 episodes compared with the first season’s 10), plus a more complicated shoot due to COVID safety protocols. “We had to take so many precautions, and we ended up taking a year,” Alice Wetterlund revealed about the shoot, who plays D'Arcy Bloom on the show. “I like the way that it's being released, personally. I think it's exciting to have the story broken up into those two halves that way. I think it works really well in terms of, at least what I've seen of the second half of the season, I think that it really ramps up, and it works really well.”

For Alan Tudyk, who stars as the titular alien, whose Earthly alias is Dr. Harry Vanderspeigle, Resident Alien is a dream role. “It allows me to do everything I like doing in one,” he stated. “It's theatrical at times; it's very funny. It can be physical. There can be physical comedy, which you rarely ever get to do in television or in film, and it can also be very touching and have very intimate moments.” They say never work with children or animals, but Alan does both on the show and has a blast doing it. “This dog, man — you can tell just by my excitement — that dog is smart. He is a good dog. ‘He was a good boy. He was a good boy.’ So I'm very happy. I'm very happy I get to do what I do. And the reason I'm doing it in this genre is because this genre allows for things that other genres don't, you know. There is a theatricality to some of it. It can hold a lot, the medium of sci-fi or the genre of sci-fi. It can hold a lot of different things, and I feel very lucky to be able to do it all.”

The show may be about a literal alien, but feelings of being alienated or othered isn’t a stretch for the cast to play. “I felt like an alien the first day on set,” revealed Sara Tomko, who plays Asta Twelvetrees. “It was my first time being a series regular, so that was a new experience for me… I've learned a lot from Asta. While she was finding her voice, I was too as an actor, coming to set. Alan taught me a lot, actually, about speaking up for myself, and we've had some great talks just about the industry in general, and it's just been so nice to have that experience and be around everyone that has had the experience as well.” Audiences may have felt a little alienated by the nearly 5-month break in Season 2, but should be happy to know that not only does the season resume tonight, but that SYFY has already renewed the show for a third season. “For Season 3, which I just started working on a couple weeks ago when we got the pickup, it will be 12 episodes,” shared series creator and executive producer Chris Sheridan. “It will not be split up. It will be more like the first season except two extra episodes. I don't know how they are going to air it. I'm assuming they are going to air it continuously, but it won't go developed as a two-part season. It will all be one arc for the season.”

So there you have it, fans can dive back into the world of Resident Alien on Wednesdays at 10/9c on SYFY for the next 8 weeks. And you can catch up on past episodes anytime, streaming on Peacock.