“It was difficult in the beginning,” comedian Patricia Williams revealed about the process of letting other writers put words in her mouth on her BET+ sitcom The Ms. Pat Show. The second season of the Emmy-nominated hit series launched on August 11th, which was cause for celebration at a recent TCA press conference. Having been used to writing her own material, both as a comic and as an author, the series based on her life offered new challenges for the actress. “We had to come together and say, okay this works. So, the first season it was a little tug. It doesn't work like that. That ain’t fun and this ain’t fun, and we gotta do it like this. But we came together, so it was kind of hard sharing funny with somebody else.” 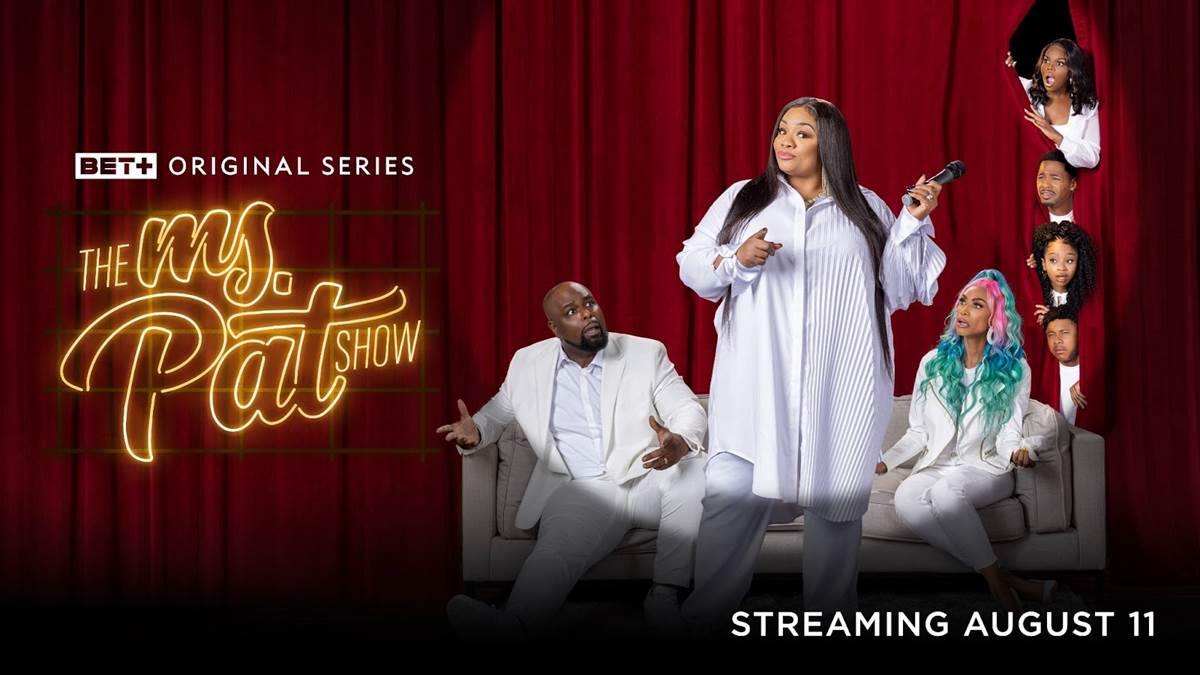 Having broken the sitcom mold and representing an authentic Black family, with authentic language, Season 2 is able to dive into even more challenging topics. “We try to come and make sure we have a great story first,” co-creator Jordan Cooper explained, who is the youngest Black showrunner in TV history. “This season we tackle everything from abortion to therapies, child molestation to drag queens to jail to cheating to all kinds of things, generational curses, lies. And we just find a way to tackle all these rough subjects with candy. I find sitcoms to be a Trojan horse for so many possibilities to bring conversations into living rooms where they would normally never be had.”

Director Mary Lou Belli received her first Emmy nomination for the Season 1 episode "Baby Daddy Groundhog Day" after over three decades in the business, with credits that include Sister Sister, Raven’s Home, and Secrets of Sulpher Springs. “What I loved about that episode, in particular, was that it had so much of Pat’s healing for her past,” Mary Lou Belli shared about the episode she was nominated for. “It has a little fantasy element to it. It has a little wish fulfillment to it, a little revenge to it. I had read Pat’s memoir. The things that touched me so much about her life, so many of them are elucidated in that particular episode.” Mary Lou Belli returned to direct 6 of the second season’s 10 episodes.

The new season just dropped and Patricia Williams is already receiving comments about one episode in particular. “The Black hair episode was the experience that I had, that I grew up with my mom with Black hair, that I know so many other Black girls like me could relate to,” Ms. Pat shared. “It dropped last night and just seeing what people saying, they was like, oh my god you hit it on the nail because I know what it is to be a little Black girl sitting between a mama lap and she saying the wrong thing that scarred you for your life, scarred you the rest of your life. She’s combing my hair and telling me I’m ugly and telling me my hair’s nappy and I’m growing up thinking it’s something wrong with me when it’s not. I just have some nice tight curls. And she could’ve used ‘nice tight curls,’ but instead she used ‘nappy’ and that scarred me for a long time.”

The goal of The Ms. Pat Show is not only to entertain but to start conversations and make every viewer feel welcome. “It’s an unfiltered, uncensored church revival,” Jordan Cooper shared about the show’s original pitch document. “With a show like this that hasn’t existed before, it’s raw, and you’re seeing some things that normally wouldn’t be seen on television or normally a lot of people are scared to say on television. We’re moving into a really beautiful time and space where we don’t have to spoon-feed other communities, where we don’t have to explain and teach. You know what I mean? Somebody asked me, he was like, ‘Are you going to do a Black Lives Matter episode?’ And it’s like I hate Black Lives Matter episodes because why are Black people watching a Black Lives Matter episode? We know. We know. You know? So it’s like at some point we just have to be, and I think that’s what this show is. It’s a family being. Because it’s like whenever I was a kid and watching Seinfeld, I just had to watch and learn. That wasn’t my community. I didn’t know those people. I didn’t know, but I just was welcomed into the apartment, just like you’re welcome into the Carson household, and just be a fly on the wall and have a good time. You’re part of the family.”

You can spend time with the Carson family in both seasons of The Ms. Pat Show, now streaming exclusively on BET+.