Tim Allen stars in the adaptation of a Dave Barry book, what could go wrong. This week a look back at a comedy caper that has an astounding cast, Big Trouble. 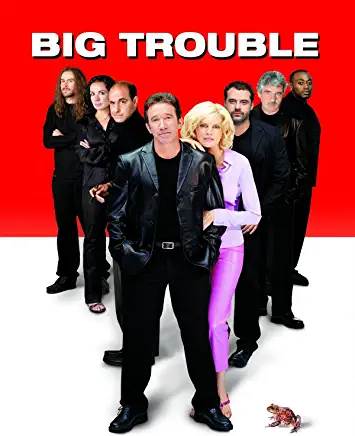 Eliot Arnold was a popular columnist at a prestigious paper in Miami. When he loses his job, he descends into the world of advertising to make a living. His mundane existence is put to the test when his son Matt’s prank gets him involved with the Herk family.

Meeting Anna, Eliot is smitten with the married lady and will do anything to help her and her daughter Jenny. After being kidnapped by two brainless thugs named Snake and Eddie. Eliot, Anna, and Matt head to the airport to rescue Jenny, and stop a nuclear bomb from going off.

Dennis Farina as the hitman sent to kill Stanley Tucci’s character is incredible. His disdain for Miami, the radio shows, and the climate is hilarious, and the best part of the film. Sadly, Farina doesn’t get enough screen time, which would have improved the movie greatly.

This is a film with a talented cast and yet the story doesn’t adapt well to the screen. I found myself caring little for what happened.

I hope Stanley Tucci got paid a lot of money for his role because wow. Rarely do I hate a character, but Arthur Herk is awful and I hate him.

The story overall is very funny, but an ensemble of such a size that is Big Trouble detracts from getting too attached to the leads. I rooted for the hitman that Farina played, and that’s not who I should care about.

There is a lot of potential in Big Trouble, but the film never delivers with the comedy that it wants to be. The movie is meant to be silly, and while I did laugh at multiple points throughout the movie, I didn’t find the overall product to be incredible.

I love Rene Russo, but she deserved better than her Anna Herk role.

Tim Allen was pretty good, but the script never quite comes together, and the story is ridiculous with little payoff.

Big Trouble is not the worst movie, but it’s not a great movie. I give it a 1 Reel recommendation. If you have some time, and want to see a great Dennis Farina performance, check it out. If you take a pass, you aren’t missing out.

Next week it’s time to bring the laughs with Steve Martin and Queen Latifah in the 2003 comedy Bringing Down the House.