Stanley (Jeff Perry) is watching the video of an influencer named Henley Scott (Bailey Dyck) on an Alaskan cruise. She goes to pose for a photo and falls off the ship. This story is going international, and the editor is fielding many calls from a variety of papers across the continent about this missing girl. 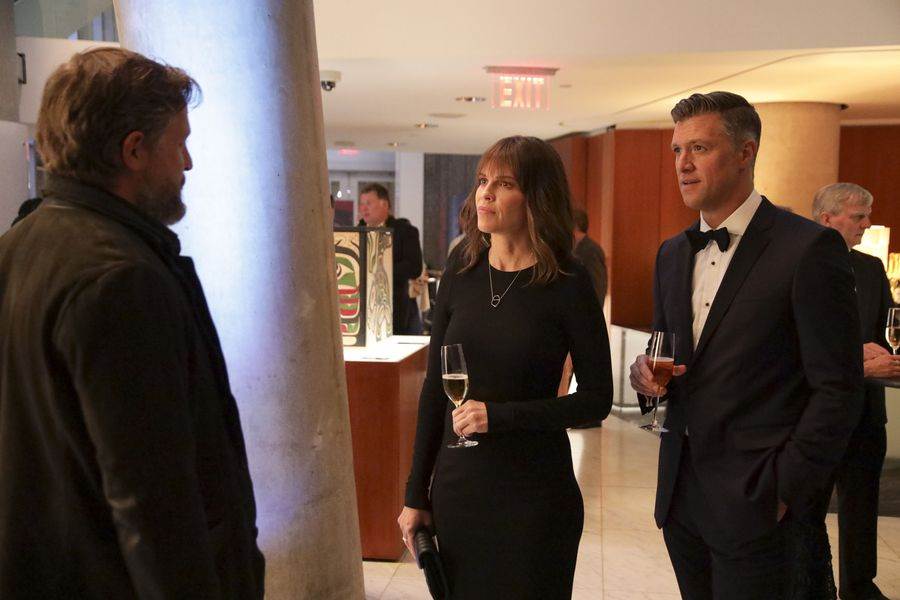 Eileen (Hilary Swank) and Roz (Grace Dove) are on a radio program discussing their stories about Chief Durkin and ADA Barnett. Throughout the program, the two reveal that their stories have led to the firing of Durkin and Barnett, and why local reporting matters. In the middle of the show, Eileen is harassed by her stalker.

Stanley is looking for someone to cover the story of the Henley Scott case but is struggling to find someone. He ultimately asks Eileen to cover the story as a favor to him. At the press conference, Eileen learns that no expense is being spared in the search.

While his number one reporter is digging into the search, Stanley is learning about the interests of his publisher. What Stanley learns is that the Pritchard family may publish the paper, but they are up to something more than just local news.

Returning to his office, Stanley is surprised to see Aaron Pritchard (Shane McRae) waiting for him. It turns out the quarterly reports are in, and subscriptions are down. Pritchard is wondering if Stanley might have any ideas of what to do. Pritchard assures Stanley that he wants the paper to work and encourages him to do his job to ensure the paper continues.

As she returns to the office, Eileen meets Aaron, and while he tries to get her to be his date for an arts gala, Eileen turns him down. Bob (Matt Malloy) is questioning a friend about the missing influencer. When asked about a ‘man overboard’ system that detects when people enter the water, Bob learns that the security system was never installed on the cruise ship.

Eileen talks with a local state commissioner and is told why so much is being spent on Henley. The government will be hounded if they don’t spend every dollar to find the white girl, meanwhile no one is upset over another missing indigenous woman.

Bob reports back to Stanley that since the cruise ship is registered out of Panama, they are not required to install the ‘man overboard’ system, and that the cruise company doesn’t have to reimburse the Coast Guard for the cost of the search. At the latest press conference, Roz and Bob learn that the search area has expanded. The two continue to question to response from authorities, and why there is preferential treatment towards white missing people compared to indigenous women. The governor’s office states a new taskforce has been established for missing murdered indigenous women, but the reporters soon learn that the bulk of the taskforce budget is used on public relations.

Eileen is trying to get a comment from the governor about the task force and learns that he will be at the art gala and decides to accept Aaron’s date offer. At the gala, Eileen runs into Jamie (Joe Tippett), and learns that he is going to be receiving an award for his poetry. 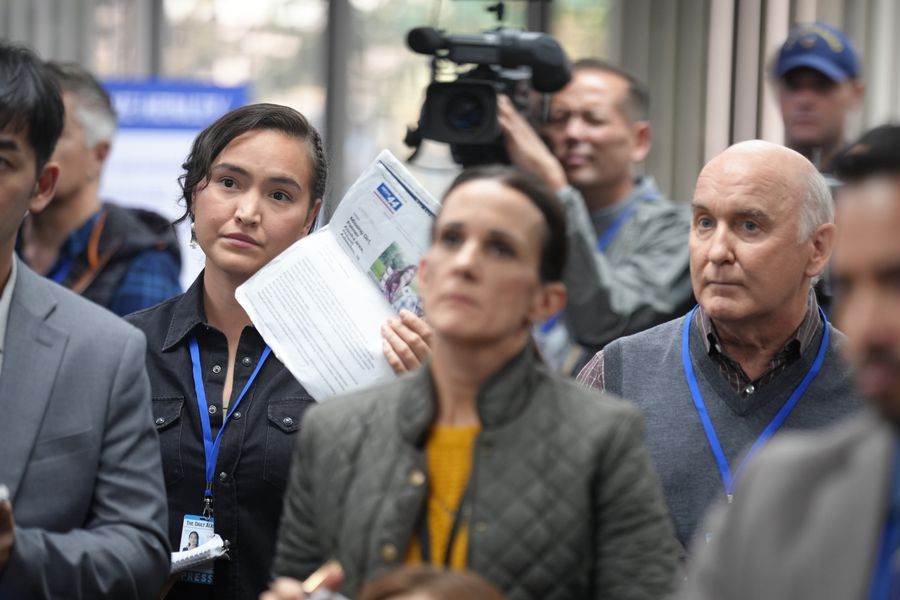 Back at the newsroom, Stanley and Roz discuss the missing woman’s case, and the editor takes the time to remind his reporter that he is not purposely holding back resources. Stanley describes how annoyed he is at not being able to fully support his reporters with what they need. Roz is happy to know that he is annoyed by the lack of resources.

Eileen meets Aaron’s dad, and questions him about the large percentage of the task force budget being directed to his public relations firm. Aaron is less than pleased that Eileen has used him to embarrass his dad.

Jamie and Eileen speak backstage at the gala, and while Jamie is easy going about Eileen and Aaron, she assures him that they are not together, and that she is only with Aaron for work purposes. On stage, Jamie recites his poem for the first time, while Eileen sits in the audience. (The poem is obviously about Eileen.)

Afterwards they talk, and Jamie asks if they could start over. Their restart looks promising, but Eileen follows the governor and questions about why the taxpayers are paying the bill. She questions the disparity in cost between resources directed to missing white women and indigenous women. The governor has no comment.

The next day at the newsroom, Claire (Meredith Holzman) confronts Eileen about her relationship with Aaron. Eileen denies any relationship. As the news breaks about finding Henley’s body. Roz and Eileen write their dual pieces about the differences with how the government treats someone who is white compared to an indigenous woman.

Their stories are a big hit, and Stanley is happier than ever, offering to buy them all a drink that evening. Bob approaches Roz and Eileen and offers a lead from when he wrote up the original article on Gloria Nanmac. This tip from Bob opens some future avenues for exploration in their story.

Last to leave the newsroom, Eileen gets a call from Jamie for a drink. She offers a raincheck, and he accepts. Alone, Eileen’s stalker enters her office, and pulls a gun. 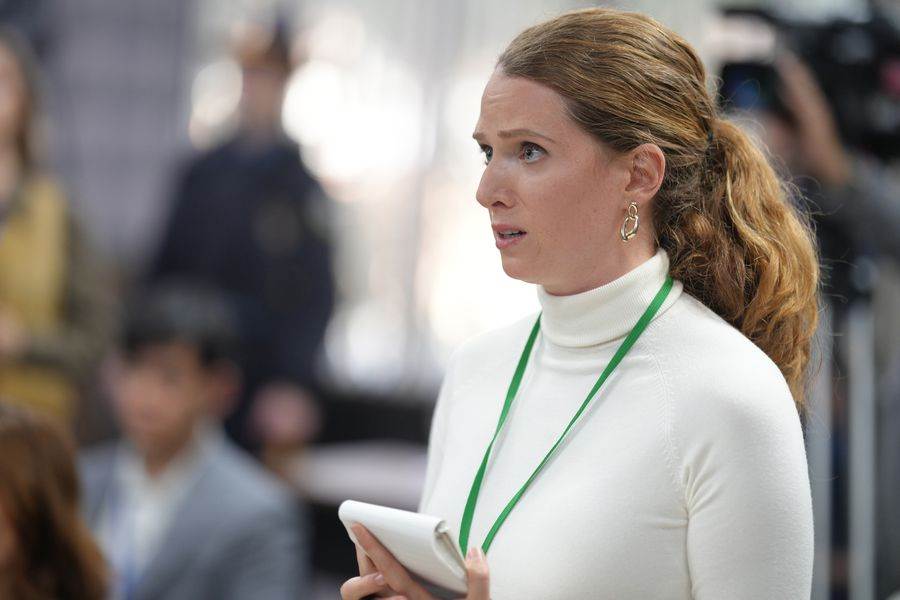 I’m a little surprised we see Eileen get confronted by her stalker so soon, but we know how this confrontation will resolve. There are obviously powerful people in Alaska who see Eileen as a threat. There is no mystery to if she will survive, the only question is, who will come in from the bar. Stanley better not be hurt. If Stanley dies, I will be livid. LIVID I tell you.

The narrative is tight, the teamwork between the cast is incredible, and the overall arc of the show continues to shine. Alaska Daily is about the abysmal response to missing murdered indigenous women. While the show focuses on one case in particular, each episode has built out the larger narrative of how there are two kinds of justice. In this episode, one white woman goes missing off a cruise ship, with no expense spared in the search. An indigenous woman goes missing, and the cops are not even involved in the search effort.

This cast is so good. Perfection on screen. I can’t wait till next week.