SuperKitties, an adorable, action-packed animated series about Ginny, Sparks, Buddy and Bitsy – four cute and cuddly kittens who are brave, smart, strong and kind and with their talents combined, turn into SUPERKITTIES when trouble arises – is set to premiere on Wednesday, January 11th, 2023. 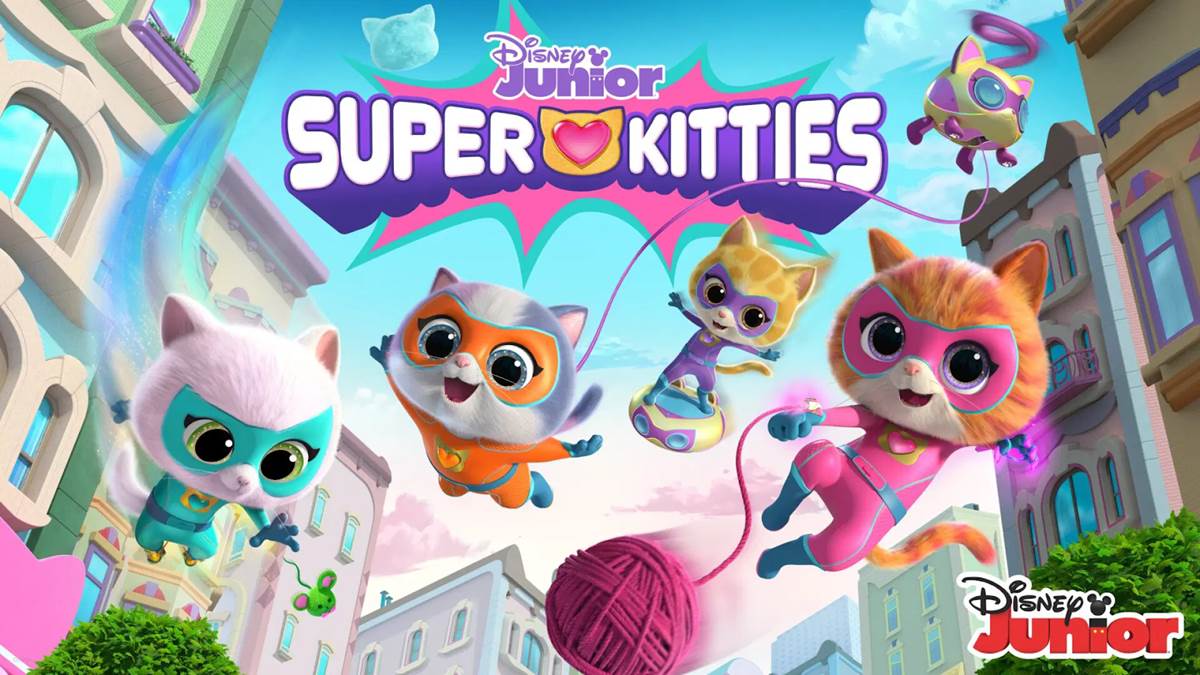 Geared to kids ages 2-7 and their families, SuperKitties brings together two popular themes among young kids everywhere: cats and superheroes! Each episode features two 11-minute stories that highlight the SuperKitties as they receive a "SuperKitty Call" from one of their animal friends with a problem that only the SuperKitties can help with (usually caused by one of the comedic villains in the series – Cat Burglar, Mr. Puppypaws, Lab Rat or Zsa-Zsa).

Paula is an experienced showrunner whose animated television credits include Sunny Day, Peter Rabbit, Gaspard and Lisa and Olivia. Rosenthal currently serves as executive vice president of Creative Content at Sony Pictures Television's Kids division (formerly Silvergate Media). Previously, she served as vice president of Original Programming at Playhouse Disney, the predecessor to Disney Junior, where she  worked on such popular series as Bear in the Big Blue House, Book of Pooh, Handy Manny, Rolie Polie Olie, and Johnny and the Sprites. A multi-talented producer, director, storyboard artist, designer and illustrator, Kirk’s credits include a wide range of series and films, both animated and live action, including Disney’s global hit series Mickey Mouse Funhouse and My Friends Tigger & Pooh. Kirk won an Emmy for Outstanding Individual Achievement in Animation: Storyboards for his work on the series Transformers: Prime. His work can also be seen in numerous comic books, and his illustrations have been used in many high-level film projects, including Kevin Smith's Mallrats and Chasing Amy, as well as David Fincher's Gone Girl.

Ahead of the series debut, Benji got to spend a few minutes with the duo to discuss SuperKitties.

I just got to see two episodes of SuperKitties. It's very exciting and it's a whole lot of fun. Can you talk a little bit about your journey to get to this show?

I think it came to me in a dream quite honestly. It was one of those things where I'm sort of a student of animation and what's on air and I love cats, I love kitties and I saw this great opportunity to create something… I also love superhero shows. And so I saw this great opportunity to [blend] the two and the timing felt right. And I was just at this place within the company where I thought we can do something that is fun and different and special and that could potentially make a difference.

At that moment we had created a little bit of a [show] bible and some pitch material and went… Our first stop was always at Disney and they really responded to it and we were off and running and I didn't have to look very far to find a partner that I knew would be able to sit alongside me. And that was Kirk. And then we took it one step further to make sure that we told our stories in a way that went deeper than just superhero antics. This was going to be a show about kindness and empathy and heart

For me. Paula had this genius idea and told me about it and it was sort of like, why isn't that already on TV? Like, where is this? You immediately are like, it's got to be out… it just made so much sense. Cats are natural superheroes. I come from a comic book background. So I was drawn first and foremost, of course, to the superhero aspect. Then the comedy aspect came in and then there's so much heart and the lessons we teach are really important to all of us that… I mean, maybe teaching is a strong word. It's that we model and through action and the whole thing was so exciting that I kind of just sort of forced myself in on it because I had to work with Paula on this. It's a fantastic show and I hope you feel the same way. Better than I ever could have expected. It's a bit of magic. So super excited to be here. One of the things I thought was impressive was, it's not just superheroes that happen to be cats or cats that happen to be superheroes. They play both. There's a lot of details where you go like, oh wow, I've seen a cat do exactly that sort of thing. It definitely has that superhero comic book style that is very detailed. You see a lot of homages to that sort of classic era of superheroes. Can you talk a little bit about meshing those things together so brilliantly?

I'm just going to say that right from get-go, one of the key tenets of the show going forward was always going to be being superheroes is what they do, but being cats is who they are. So that no one ever forgot the fact that they could be chasing down a villain but easily distracted by a falling leaf or a laser beam. Paying attention to those details going forward sort of fell into Kirk's purview to make sure that  the twitch of the tail was there or the twitch of the ear, the way the pupils dilated.

As you're developing a show, you're looking at so many elements, but one of them is how are our characters going to be created so that they can exhibit those things that you want? There are many cats on TV and other shows that don't have what we have because we went in and purposely said, “we want to make sure these cats can behave like cats, that it's natural and organic for them to do that so that we could lean into the comedy. Those telltale signs, like when a cat is curious and the tail starts going. The way they just even hop up on an object. Part of having it both be a show about real cats and a superhero show is you want those two to feel like they're connected. And the only way to do that is to always remember that they're cats. I feel like our stories are told from that point of view and that really helps the voices. 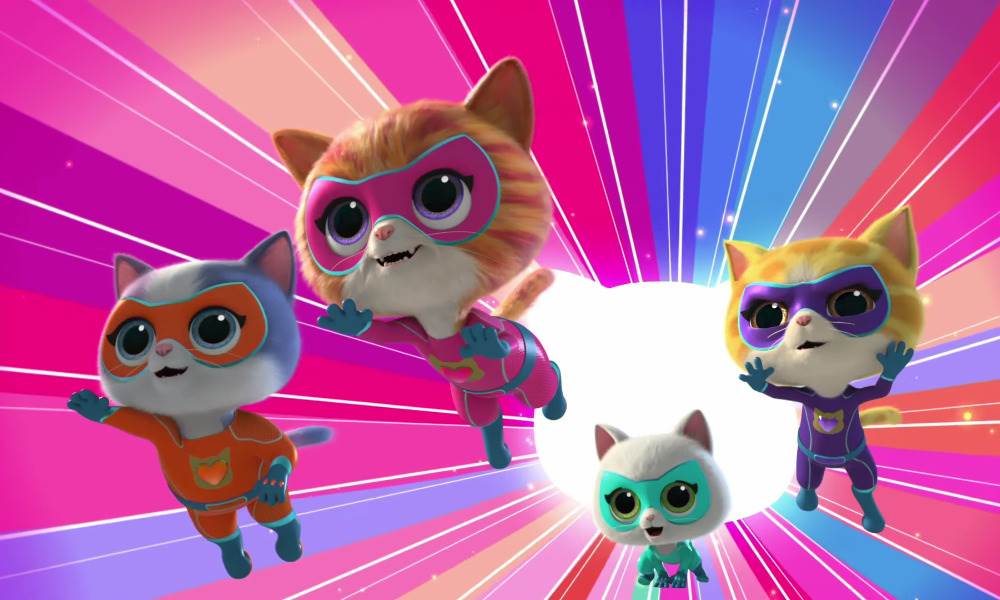 Some of the best scenes are where the music really gets to shine in the show. It's great. From the theme song to the songs that take place up, episodically. Can you talk about the role music plays that it puts you right in that superhero vibe?

Well, music is really important to us too. From the get, we knew we needed to have songs. Not just songs for when they transform, but episodic songs, one in every pairing at least. And we have one composer who is taking care of all of those songs, so he clearly understands the palette that we're trying to achieve. He has studied the characters, he knows that they are cats, so he tries to infuse that kind of catlike behavior. We're a team that's really done our homework and yes, those songs really capture the individual characters and the characters holistically and the palette of the show.

You can't imagine a bigger platform for a show targeted to this audience than Disney Junior. Can you talk a little bit about what it means that so many kids are going to learn and be inspired by your show moving forward? Because it's so high quality that it's going to have a long legacy.

First of all, thank you for that. We can only hope. We really believe in what we're doing here. Truly, if we can impact even a small percentage of the audience, even if it's one person whose takeaway from this is to be more empathetic, to be more kind, to listen to others, to help them through hard times. Everybody's got a story. And if our show is a model for how you behave with others, then I think we've done our job. I could only hope that it lasts forever.

The thing about many Disney Junior shows, it's also not something that's going to turn off parents. It's still fun. It's still got those neat sort of details that will still entertain an adult without it being inaccessible to the smallest audience. I think that's going to be a great way for folks to see it, because the parents won't want to turn it off.

Thanks. Yeah, I mean, from my point of view, I love cartoons. I always have. I rarely watch live action. If I have the option I'd rather see something that you can only do in cartoons, but I want to be able to watch it and enjoy it. And I certainly enjoy these shows and they make me laugh. Sometimes they make me cry. I'm like, oh, that's so great. So I hope that parents and even non-parents, just people who love cartoons are going to watch it and find the joy that I know we all find when we're making this and when we're watching the magic that comes together at the end.

SuperKitties is set to premiere on Wednesday, January 11th, with a simulcast on Disney Channel and Disney Junior (10:30 a.m. EST). An initial batch of episodes will premiere the same day on on-demand platforms and Disney+.