It’s hard to believe that it’s been six years since Tim Burton’s Alice in Wonderland crossed the billion dollar mark and kickstarted an era of live action adaptations of Disney animated classics. It’s even harder to believe that it’s taken this long to churn out a sequel, borrowing a title from Lewis Carroll’s second Wonderland book, Alice Through the Looking Glass. Since the film had six years to gestate, you may have expected great things like I did. Sadly, the final result isn’t worth the wait.

Like the first film, Alice Through the Looking Glass steals the title and a handful of characters from the source material, but otherwise ventures off in a brand-new direction. Alice has returned from her three-year sea voyage a changed woman with new ambitions. However, her would-be suitor Hamish is now in control of her family’s finances and enacts his revenge on Alice for refusing his hand in marriage by barring her from further expeditions. It seems that time is up for Alice’s dreams, until a blue butterfly leads her through a mirror and back into Underland. 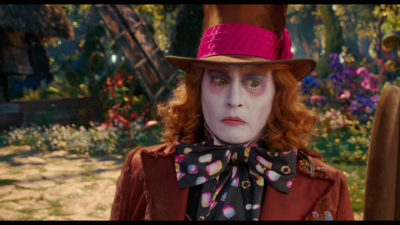 Mad Hatter has gone “mad,” meaning he’s lost his will to live after coming to the impossible conclusion that his family must be alive, even though everyone knows them to be dead. In order to save the Hatter from his new state of being, Alice must go to Time, a living person who controls every tick of the clock in Underland, and use his Chonosphere to change the past. The only problem is that the Chronosphere is like a vital organ to Time, without it he and Underland can’t exist. 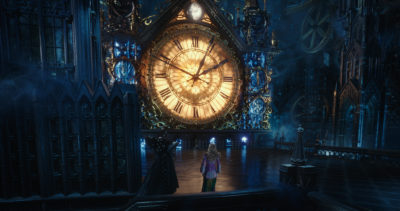 The bulk of the film is spent traveling through time, something that sounds fun but ends up being too serious and dramatic to be whimsical. Alice only interacts with characters from the first film and their immediate family while running away from Time. There are so many missed opportunities to incorporate many of the other characters from the Carroll books, or even from the Disney animated film (Doorknob and the flowers come to mind). But the worst part for any fan who has graduated beyond middle school is that the rest of the plot devices are overly watered down. Life changing moments for several characters are revealed along Alice’s travels, all of which are flat, one-dimensional and too simplistic to invest any real emotion in. While the premise is intriguing, it is completely ruined by the backstories revealed from the past. 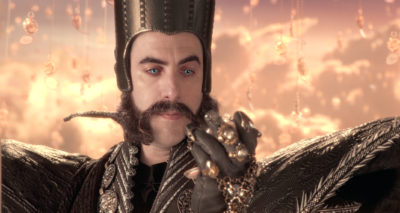 One of the few strengths of the film is Time, played by Sacha Baron Cohen. His existence allows audiences to part with some deep, philosophical thoughts. He is also the source of what little mischief is kept in tact this time around through the many puns that are made at his expense. But a caveat is that the past cannot be changed, a fact Alice refuses to believe. What this really means is that all of the time travel, which accounts for the majority of the film, is simply exposition (an entire film of exposition). 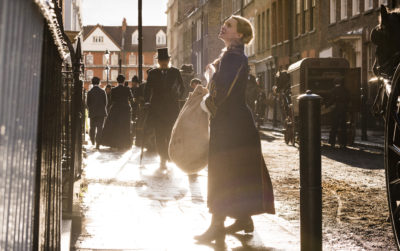 But the biggest reason why Alice Through the Looking Glass fails to achieve the same success as Alice in Wonderland lies in the connecting tissue between real-world Alice and Underland Alice. In the first film, Alice is allowing herself to be steered towards a future she doesn’t want in the real world. Through her adventures overthrowing the Red Queen, she learns to stand up for herself. When she returned home, she had the strength she needed to take a stand for herself. This time around, she’s fighting societal oppression for being a woman in an era ruled by men. Through her adventures she… learns about how to use time wisely and the importance of family. See the disconnect? You can’t possibly achieve the same amount of resonance with such great disparity between the lessons Alice learns and the problem she’s trying to solve. Overall, it just feels like a half-hearted effort and its existence only tarnishes fond memories of the previous film and its characters.

I give Alice Through the Looking Glass 2 out of 5 seconds.