Walt Disney Records has been releasing soundtracks to classic films on picture disc vinyls for a few years now, but they only recently began to scratch the surface of the theme park library. First released at the D23 Expo and exclusive to Disney Parks until now, these LPs celebrate the music of three of the most iconic attractions of all time: it’s a small world, Pirates of the Caribbean, and The Haunted Mansion. These three vinyl releases are now available online through the Disney Music Emporium in addition to being sold at Disneyland and Walt Disney World.

When vinyl became popular again, I thought it was odd. Having grown up in a cassette tape/compact disc/mp3 era, I was confused why anybody would want to listen to a bunch of pops and scratches from an outdated format. But then I went to the D23 Expo, saw the adorable Mickey Mouse record player, bought it, and became obsessed with collecting vintage Disneyland Records releases. I had been told that the audio quality on vinyl was better than CD or mp3, but I was in disbelief until trying the format for myself.

I will now dive into the contents of these three releases, in the order in which the music originally debuted. 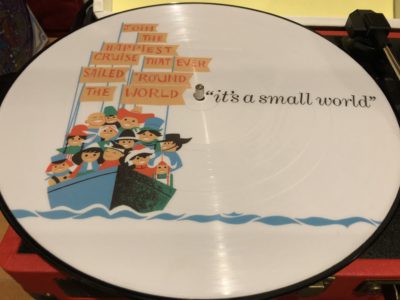 This picture disc features artwork from the original attraction poster on both sides. While it would have been neat to have more Mary Blaire concept art on side b, it’s still an enchanting esthetic. If you’re more of a casual theme park music collector (ex: only collecting the Official Album’s), then you probably don’t own a few of these tracks. Serious Disney music collectors would own all of the contents already if they own Walt Disney and the 1964 World’s Fair.

Comparing the tracks to the CD versions, the vinyl yields a fuller, richer sound. Being pressed in 2017, there are virtually no pops in the music, although as I’ve learned pops can be caused by static electricity on the vinyl and there are not necessarily due to scratches or imperfections in the vinyl. In other words, your experience may differ slightly every time you listen.

In terms of track order, I wish side a would have put the tracks in the order guests would have experienced them in 1964 rather than putting the attraction audio first, but I digress. “The Ultimate Mega Mix” on the b-side is all instrumental, no vocals, but presents the theme in full for each of the musical styles represented in the attraction, isolated for each verse and chorus. Yes, it’s glorious.

Pirates of the Caribbean 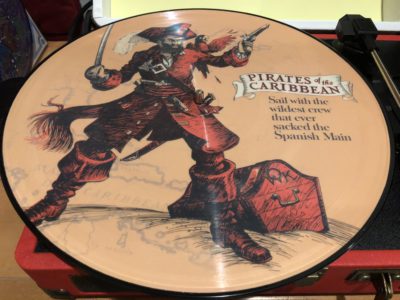 Pirates of the Caribbean recently celebrated its 50th anniversary and this picture disc is a perfect way for fans to celebrate from the comfort of their home. It brings together the iconic music from George Bruns and Xavier Attencio, who also collaborated on the third release in this wave, The Haunted Mansion. Both sides feature artwork created for the original attraction poster.

All of the tracks in this case can be obtained digitally from the album Pirates of the Caribbean (Original Attraction Soundtrack), which was exclusively available on CD at Disney Parks in the late 1990’s/early 2000’s and is currently available digitally through iTunes, which includes additional tracks not on this release. The A-side features nearly all of the audio elements from the Disneyland version of the attraction, including moments with no music and just infamous dialogue.

Side B is a bit of a mixed bag, containing isolated tracks of some elements found in the mix on side A. “Fortune Red” is a nice addition, background music from a New Orleans Square gift shop that specializes in pirates merchandise and contains the legendary Pirate fortune teller, where guests can receive a collectable fortune. The demo is also interesting to hear for the alternate, more upbeat lyrics it offers. 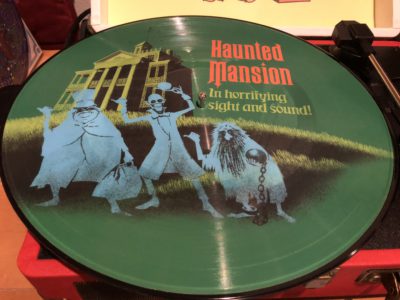 Welcome, foolish hipsters, to The Haunted Mansion picture disc vinyl! The front contains artwork from the attraction poster, while the B-side features one of Marc Davis’ sketches for the organist. Do not pull down on the tone-arm, your ghost host will lower it for you. MWAHAHAHAHAHA!

All of the tracks from this release are available digitally on a 2009 album simply called The Haunted Mansion that is structured similarly to the Pirates album previously discussed. The attraction audio on side A seems to be Disney’s official version of the attraction audio, but it is far from complete. A different album themed to the attraction used to be available in Disney Parks and contained full audio versions from the attraction around the world. The Disneyland track on that release clocked in at 22:28 and was far more complete. It’s a shame that version wasn’t used as there was certainly room on the disc. But all that aside, the stereo mix is quite impressive.

Side B is a bit of a mixed bag. “Ghostly Music Box” is actually from Disneyland Paris’ variation of the attraction called Phantom Manor. At Disneyland, it appears seasonally in the outdoor queue for Haunted Mansion Holiday. The rest of the tracks feature expanded orchestrations not heard in the attraction itself. 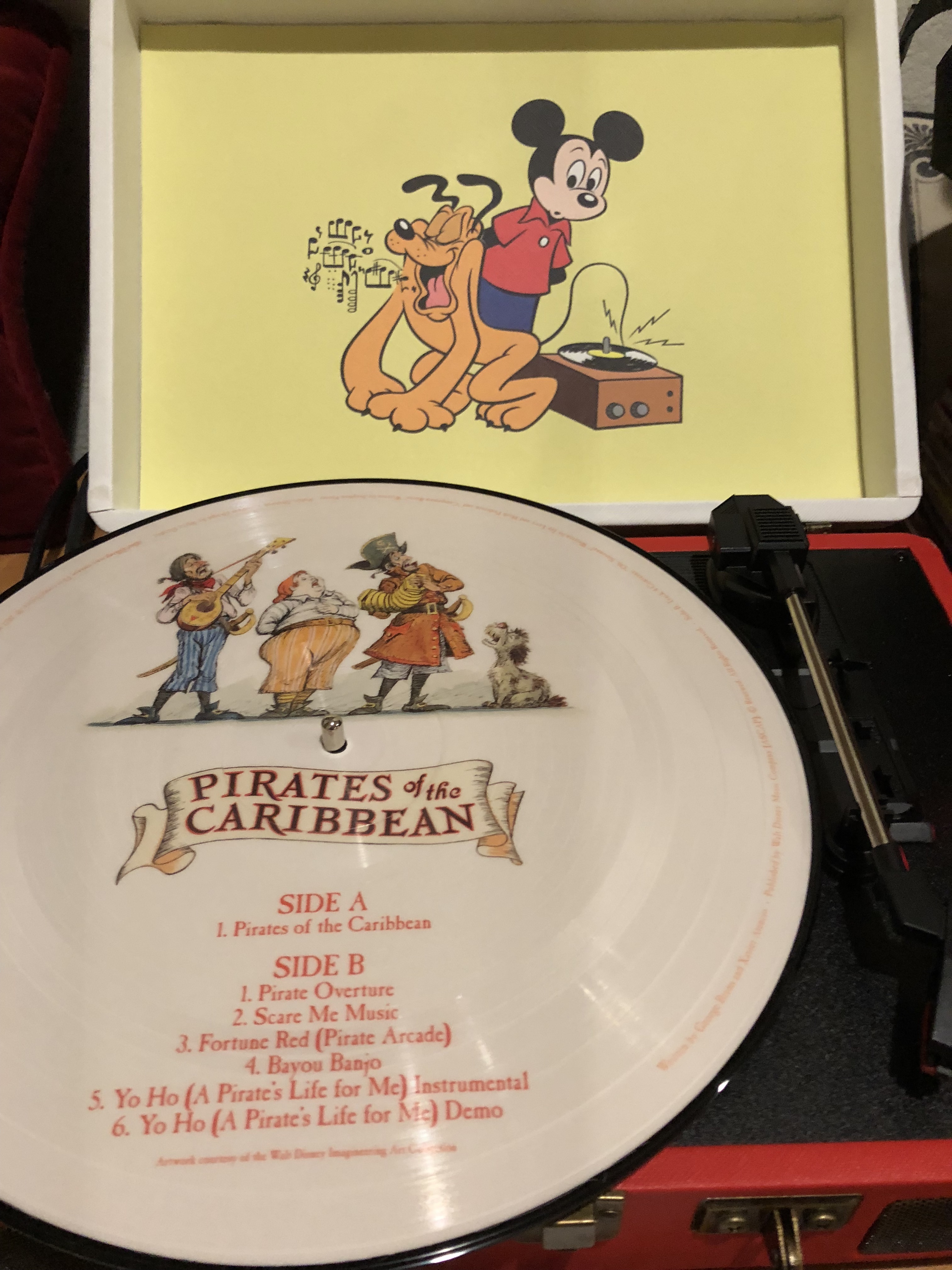 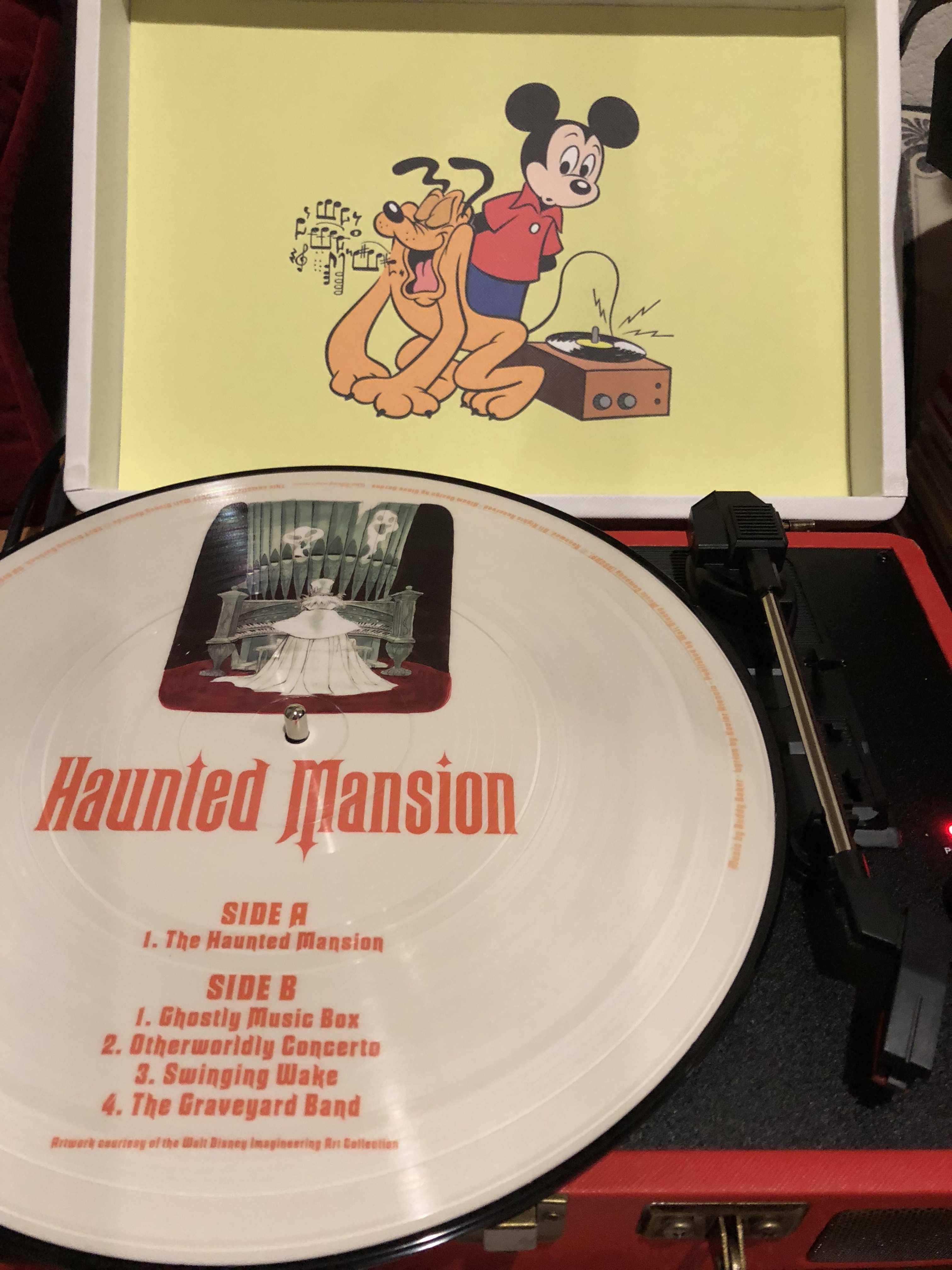 I really enjoyed experiencing music from three of the most classic Disney Parks attractions in HI-FI on vinyl. The picture discs are a fun way to collect Disney music and I will be enjoying these releases for years to come. If I had to recommend one over the rest, it’s a small world wins by containing a more complete audio experience and a great b-side that’s just as fun as the main attraction. Pirates of the Caribbean is another solid release, but The Haunted Mansion loses points for not having the complete ride audio and leaving a lot of… dead space… on the disc (Haunted Mansion Holiday could’ve/should’ve been included for the short run times on disc). It’s a shame that the most popular of the three releases is the weakest.