Star Wars: Rebels, the upcoming Disney XD series, keeps their rollout of the cast going with Sabine.  Check out the video and concept are below as we head light-speed towards the one-hour premiere this fall. 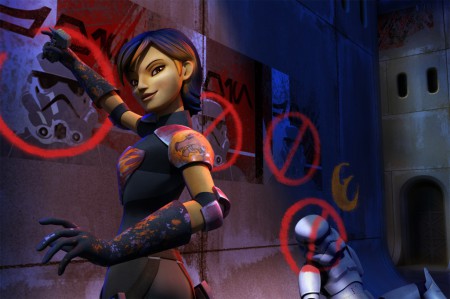 Sabine is a key member of the Ghost crew in Star Wars Rebels. As seen in this special video, featuring early design concepts, animation tests, and final art, Sabine is unlike any Star Wars character – especially in her love for blowing things up and tagging her work with graffiti.

Dave Filoni, executive producer of the animated series, discloses that Sabine is a Mandalorian. She has a great understanding of weapons and combat like few others, and has turned against the Empire. “She is spunky, she’s feisty, she’s got a little bit of attitude,” says actress Tiya Sircar, who is voicing the character. Additionally, Sabine is an artist, which is reflected in her hair, personalized armor, and graffiti calling cards. After the Ghost crew hits the Empire, Sabine makes sure the Empire knows who did it. Concept artist Amy Beth Christenson says that the Star Wars Rebels animation team has created a library of graffiti tags for Sabine, and is constantly adding to it. 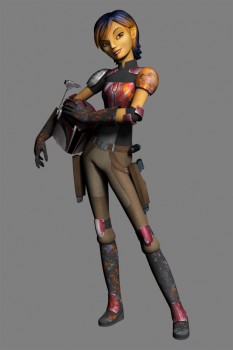 In the end, Sabine is a strong, no-nonsense heroine. As Sircar says, “I think she’s kind of an inspiration.”

Star Wars Rebels is scheduled to premiere in fall 2014 as a one-hour special telecast on Disney Channel and will be followed by a series on Disney XD channels around the world.