They have the first image from the scene: 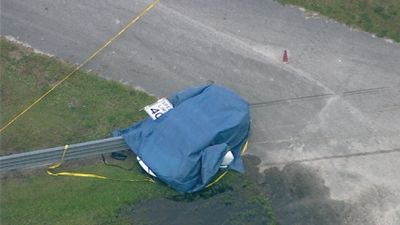 Update from the Orlando Sentinel:

According to the Florida Highway Patrol, the driver failed to maneuver the high-powered sports car through one of the course’s curves, and the vehicle’s right side struck a guardrail.

The passenger was pronounced dead at the scene, according to FHP’s Sgt. Kim Montes.

The driver was taken to Celebration Hospital with minor injuries.

Neither the driver nor the passenger were identified.

According to the WFTV.com, there has been a fatal incident at Walt Disney World’s Richard Petty Driving Experience.