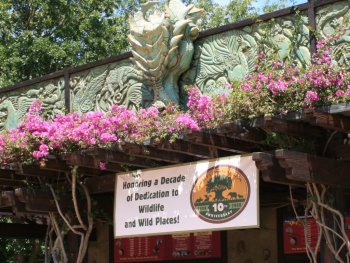 On April 22, 2008 Disney's Animal Kingdom celebrated in 10th anniversary. As is often the case this special event offered the opportunity for a Disney fan reunion. Throughout the day Doobie and I chatted with Jim Hill and Jeff Lange of Jim Hill Media, Denise from MouseSteps, Deb Wills of AllEarsNet, Julie and Mike O'Neal authors of The Complete Guide to Walt Disney World, John Frost of the Disney Blog, TDLFan, and others. Its always a special treat at these events to catch up with fellow Disney fans. Our adventure began with the opening ceremonies. We've posted full video and images so rather than recap those moments again I'll share my impressions.

I love the way that Disney cast members are so often the focus of celebrations such as these at Walt Disney World. When the turnstiles opened and the crowd of guests made their way through the Oasis to the Tree of Life garden entrance there already waiting at the rope were dozens and dozens of cast. They had the prime spots. As the various representatives of the cast who were a part of the opening ceremony arrived, those watching cheered and applauded. Their pride in their park and fellow team was undeniable and it was much more fun to share in the special celebration with them. The stilt-walker Yeti was stunning and something I'd not seen before. I hope that was not his only outing. I was moved by the chimpanzee vocalizations of renowned primatologist Jane Goodall and the impact her kind congratulations and compliments had on the cast including Joe Rohde, Disney's Animal Kingdom lead designer.

As Disney unveiled the new name for their conservation fund, I was reminded of how important Disney has been to the conservationist movement throughout the years. Before it was hip to be green, Walt Disney albeit in an imperfect way sought to connect us with nature. Through his true life adventures series, we came to care and value various species. In classic animated features such as Bambi we grew to love forest creatures and saw the impact of a careless man on their home. Disney's Worldwide Conservation Fund has contributed more than $10 million, distributed among 550 projects in more than 100 countries since its inception in 1995 as Disney's Wildlife Conservation Fund. However the Disney Company has participated with more than just money to protecting the natural beauty of Earth. As part of the Earth Day celebrations at Disney's Animal Kingdom, Rafiki's Planet Watch hosted displays of the various projects the Disney Company has participated in. Among them the Franciscana Dolphins Project in the coastal waters along Argentina. The Franciscana dolphins tendency to stay underwater, small size and short dorsal fin make them difficult to spot in the wild. The dolphin unfortunately is most often spotted once it has been caught in the nets of native fisherman. Scientists from Disney travelled to Argentina and assisted in the tagging of the rare dolphin. Their hope is to learn more about the behavior of the dolphins in hopes of improving the fisherman's techniques so they can continue to catch the fish they need without killing the dolphins. The team is also experimenting with putting a netting that is embedded with metal to see if it will make the nets detectable to the dolphins while still catching fish.

Back in 2006 two white rhinos born at Disney's Animal Kingdom joined four other white rhinos at the Ziwa Sanctuary in Uganda in hopes of re-establishing the rhino population there. The Ugandan rhino became extinct to the nation in the early 1980s during the nations civil unrest and heavy poaching. The rhinos are now monitored regularly by park rangers for their protection and have transmitters implanted in their horns so they can be tracked. Follow this link to learn more about their new home As we were leaving Rafiki's Planet Watch, I had the chance to chat with Pipa the talking the recycling bin and view a GM hybrid. By the way, don't make the mistake of calling Pipa a trash can. You can see video of me actually hugging the bin here. Its funny just how alive that little bin seems.

But the highlight of the day was the cast member presentation by Joe Rohde that the general public was permitted to attend. Imagineers are amazing. No matter how much I learn about the process of making the magic I'm still in amazement. Some have asked if learning these behind the scenes details have somehow made the parks less magical. For me in many ways they've become more magical. The exploration has so many levels now. There's the first time experience, the wow factor of a new experience. Then you return to catch the little details you missed the first time. Then in subsequent trips you try to figure out how they did it. Then you learn actually how they did it and so you try to see if you spot how they did it now that you actually know the secret. But even when I know how its done I enjoy losing myself in the experience and connecting to the story and its emotion. 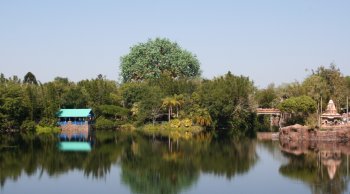 Disney's Animal Kingdom is a truly unique theme park experience. Unlike the Magic Kingdom or the Studios where I feel free to pop in and jump on a ride or two and then leave, I am compelled to set aside blocks of time when I want to visit Animal Kingdom rather than setup a checklist of spots to hit. I love to meander slowly through the various animal habitats, sometimes watching the animals and other times watching the people watch the animals. Animal Kingdom's ability to connect me to the larger story of our planet is rejuvenating. Disney's Animal Kingdom celebrates the world's many magnificent peoples and cultures as well as its varied species of animals and plant life that exist here together. Its that reminder that makes each visit to the park awe-inspiring and empowering while profoundly humbling.