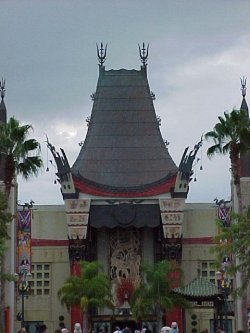 My first trip to Walt Disney Worlds Studios was May of 1991. My family had moved from Southern California to a sparsely populated area of Texas. We didn’t love the new locale but kept up our spirits with a planned trip to Walt Disney World. Walking into the Studios Park was like a breath of fresh air, the Hollywood that never was yet always will be as Michael Eisner said in the opening day dedication. Growing up taking out of town guests to Hollywood – the real one – tends to disappoint but at Walt Disney World it’s sparkling, clean and vibrant with celebrities mingling with everyday joes. I felt as if Id gone home and it was even better than I remembered giving the Studios park a special place in my heart. I’ll not forget the fun my family had watching animators create a sequence for what would become “Beauty and the Beast” -or- playing “remember when” as various scenes in The Great Movie Ride and along the Tram Ride sparked memories from family viewings of the films or shows featured.

At the Studios I discovered the fun of themed dining experiences with SciFi Dine-In Theatre. Growing up we watched broadcasts of classic Saturday matinee type films with mom when we were home from school sick. So it was no surprise that as our family sat in the modified vehicle tables we recalled a number of the films featured in the trailers. We also loved that it seemed to be modeled after the Drive-In in Winnetka where we saw too many Disney films to recall from Herbie films to Honey I Shrunk the Kids and half expected to see a playground by the snack stand. Having the greeter and some of the wait staff carry out their duties on skates adds to the fun. Not quite as unusual in its theme is the Studios’ Brown Derby Restaurant — an elegant restaurant from a bygone era. It’s fun to try and identify the faces on the wall. The original Brown Derby is known as the birthplace of the Cobb Salad and perhaps it’s because it was the first Cobb Salad I had, but I stopped ordering them anywhere else, it’s just not the same. But I wasn’t a big fan of the much ballyhooed Grapefruit Cake at first it’s grown on me over the years especially without the additional sauce atop. And while I still love going to the Derby I miss terribly the live music that was provided in years past. Thankfully Jeff can be found at the Celebration Hotel so you can still enjoy his entertaining musical stylings if you miss it too much. 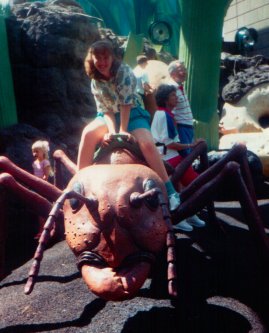 The Studios also offers several experiences that get the blood pumping – the amazing Twilight Zone Tower of Terror and Rock N Roller Coaster. The richness of the visuals from beginning to end at the Tower still amaze me. I would never, ever have dared travel a drop-style attraction were it not for the entire experience that they created, pulling me deeper and deeper until it was too late. Unfortunately Tower 4 is too much for me as I passed out so I don’t tackle this attraction anymore but often wait in line with friends to enjoy the queue environment before skipping the ride itself. Rock N Roller Coaster reminds me of the fun times driving my convertible along the streets of Hollywood with the radio playing. Simple things like the illuminated Hollywood sign in this attraction connect in a special way but I still can’t believe that I’m zooming around rockin’ to Aerosmith at a Disney park. When in the mood to get the blood pumpin’ without motion sickness visits to Lights! Motors! Action! and Indiana Jones fit the bill beautifully.

The Studios is also a fantastic canvas for a variety of special events during the year. My favorites are ESPN the Weekend and Star Wars Weekends and I continue to hope for Disney Channel Weekends although maybe D23 Weekends would work. =) Both the ESPN and Star Wars events bring fans close to celebrities in these fields in friendly environs. It’s fun to watch fellow Star Wars fans gawk at the Stormtroopers atop the turnstiles on the way into the park. And during ESPN the Weekend it seems there’s an athlete or ESPN personality around every corner. It’s at the Studios during these events that fans can chat with Hall of Fame Broadcaster Peter Gammons, watch the Globetrotters play three-on-three with a group of preteens, catch an interviews with Peter Mayhew of Chewbacca fame, dance with a Sith or Ewok, or show off their knowledge in a trivia challenge against fellow fans or perhaps Sports Stat Legend Howie Schwab. 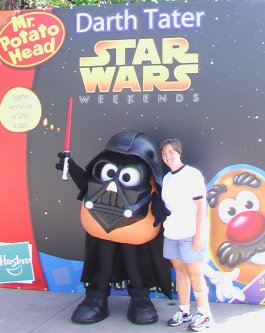 During the holidays, the Studios hosts the Osborne Family Spectacle of Lights. Each year this presentation of millions of twinkling lights brings me to tears as I watch the eyes of little ones widen to the size of saucers at the holiday magic. Seeing families smiling and posing for photos in the falling snow, enjoying the familiar Christmas tunes is something to look forward to each year.

But the Studios will always be incredibly special to me as it was there that I fulfilled a lifelong dream to complete an endurance event. I never thought such a thing was possible for me but often dreamed of it and decided to participate in Disney’s Inaugural Twilight Zone Tower of Terror 6.5K. It was the first event I’d seen (and only) without a posted minute per mile restriction. Working hard for months leading up to the event, I completed the course. It wasn’t a record time but I wasn’t the last one across the finish line either. It was like one of those feel good sports films as in October 2007 I earned my Tower of Terror medal walking the winding streets of the Studios (physical limitations don’t permit running). I will never forget the excitement (and the exhaustion) of crossing the finish line in the shadow of the Tower. It was a dream come true reflecting Eisner’s opening day description of the Studios as a celebration of Hollywood – not a place on a map, but a state of mind that exists wherever people dream and wonder and imagine. 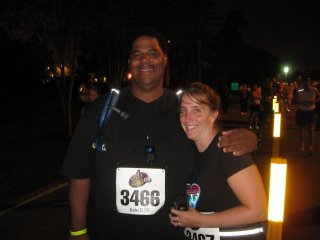