Marvel One-Shot: All Hail the King

“Come not between the dragon and his wrath” 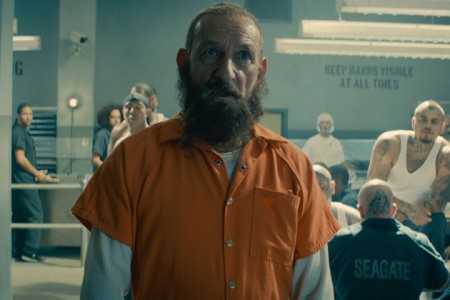 Thor: The Dark World is now available on Digital 3D and Digital HD.  As a bonus feature on the download, Marvel is premiering their latest Marvel One-Shot short film.  All Hail the King was written and directed by Drew Pearce, the co-writer of Iron Man 3 and stars Sir Ben Kingsley as Trevor Slattery.

It is very difficult to talk about this short without sharing any spoilers, and the delight of the short should not be ruined.  But that not withstanding, the short features what many folks love about Marvel films; cameos, world building, and mid-credits scenes.

For those that need a refresher, Kingsley’s Slattery was hired by the true villain of Iron Man 3 to act as a terrorist named the Mandarin.  By turning one of Iron Man’s classic foes into a drunk actor was very controversial to many Marvel fans.  Ever since Marvel fans have longed to see the Mandarin, so it is understandable when it turned out the character turned out to be a farce.

This One-Shot was made to directly address the fan’s concerns with the Mandarin issue.  In the short, Scoot McNairy plays Jackson Norriss, a documentary filmmaker asking the same questions that fans have been asking since Iron Man 3.  Hopefully those disappointed with the Mandarin being just a puppet are satisfied by how Slattery’s interview with Norriss turns out.

One spoiler-free highlight is Trevor’s failed CBS pilot, “Caged Heat”.  This early 80’s style cop-show features a vodka-drinking monkey, which instantly makes it better than most shows of that era. The show even featured, like most shows of that time, music by Mike Post.  (Which was a very nice touch).  One nice tidbit, “Caged Heat” was the working title for Iron Man 3 used as to not draw attention to the production.

For Marvel fans there are some Easter eggs.  The action takes place at Seagate prison.  In the comics, this was home to Luke Cage who is about to have his own Netflix series.  Also making an appearance in the film is Fletcher Heggs who is Knight in the comics and was a henchman of Obadiah Stane, Those that are looking for clues to the short by looking at Jackson Norriss in the comics should know that the Marvel Cinematic Universe version differs quite a bit from his comic book inspiration.

I enjoyed All Hail the King.  It has an odd mix of humor and danger, but it works due to Drew Pierce’s writing.  Be warned, while Trevor may not be a super-villain, he has no redeeming quality.  He shows this be being quite crude and completely unsympathetic.  Those wanting Trevor to reveal his true mystical and evil nature will be disappointed, but I hope that those that were turned off by Iron Man 3 give this short a shot.  That being said, I still feel like I enjoyed Item 47 and Agent Carter more because they featured characters I cared about.  However, as a fan of the cinematic world Marvel has been building, All Hail the King is quite exciting.

These Marvel shorts are not just throwaway bonus features.  The last two, Item 47 and Agent Carter were practically backdoor pilots with Marvel’s Agents of S.H.i.E.L.D. being inspired by one and an Agent Carter series in development.  While I don’t expect Ben Kingsley to actually star in a TV series, this edition builds future avenues for the Marvel Universe more than any other One-Shot.