From the Vault: ‘Rudyard Kipling’s The Jungle Book’ 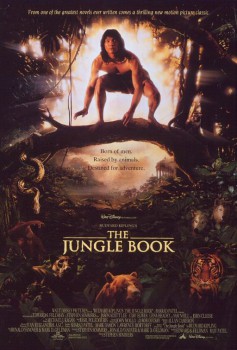 Walt Disney’s classic animated version of The Jungle Book was so well remembered that in the mid-90’s, the studio couldn’t resist revisiting it. It may come as a surprise that prior to 1994, Kipling’s classic tale had only been brought to the big screen in America twice. We all know the Disney version from 1967, but few now know the United Artists version from 1942. It starred Sabu as Mowgli in a telling of the story that was more focused on adult Mowgli and greedy men who are capable of spoiling the beauty of the jungle.

In 1993, independent Indian producer Raju Patel was in early production on a new version with an adaptation by Ronald Yanover and Mark Geldman. At the same time, Michael Eisner was working on expanding the Disney film brand with a series of remakes of Disney films. American producer Mark Damon brought it to Eisner’s attention and pitched it for the 100th anniversary of the original Kipling novel. Production was already in progress on an update of the film The Incredible Journey, which became a big hit when it was released as Homeward Bound: The Incredible Journey. It didn’t take long for Eisner to have his team make an offer to buy into Patel’s production, increasing the budget to $30 million.

Disney quickly assigned director Stephen Somers to give his treatment on the screenplay, having recently come out of production on The Adventures of Huck Finn. Based on both The Jungle Book and its sequel The Second Jungle Book by Rudyard Kipling, Somers also introduced references to Disney’s animated classic to the screenplay. Now with major studio backing, casting was able to secure some top talent. Hawaiian-born actor Jason Scott Lee was cast in the lead role of adult Mowgli (he would later voice David in Lilo & Stitch). The Princess Bride star Cary Elwes was cast as his nemesis, Captain William Boone. Sam Neill, who recently became a superstar following the release of Jurassic Park, plays Colonel Geoffrey Brydon. And Monty Python star John Cleese was cast as Dr. Julien Plumford.

Filming took place primarily in India. Interior sets were filmed at Mehboob Studios in Bombay, where the internal temperature could be as hot as 137 degrees since the studio didn’t have air conditioning. Many of the jungle scenes were shot on location in Jodhpur. Due to the locale, the production put an ad in papers looking for extras that could play British officers and cast the roles with young people backpacking through India. The film had the largest number of trained animals assembled since Twentieth Century Fox’s production of Doctor Doolittle in 1967. This made production so complex that the team had to film some jungle scenes in Tennessee and South Carolina since it was too challenging to relocate many of the trained animals to India. Due to the dangers of filming with a tiger, all of Shere Khan’s scenes with human actors were filmed on sets with only the essential crew present. Any shots requiring a human actor to be face-to-face with the villainous tiger used blue screen effects to avoid serious injuries.  A scene depicting a tiger mauling one of the characters was accomplished by having a trainer play the human with a tiger trained to play fight with them.

To make it clear to audiences that this wasn’t merely a live-action version of the animated classic, Disney added the author’s name to the film title: Rudyard Kipling’s The Jungle Book. Despite this branding, the film is actually quite different from Kipling’s episodic tales. Sommers created a linear story following Mowgli’s return to civilized society and invented most of the human characters. Perhaps inspired by MGM’s The Wizard of Oz, each human character’s personality was inspired by one of Mowgli’s animal friends. According to Sommers,Boone is Kaa,  Colonel Brydon is Colonel Hathi, and Plumford is Baloo. He also drew similarities between adult Mowgli and Shere Khan (in terms of their fearlessness). This telling of the tale is a love story between Mowgli and a childhood friend named Kitty, who is the reason adult Mowgli is drawn out of the jungle. It is also a story about Mowgli’s love for the jungle animals and how civilized people can be much crueler than a jungle predator.

The world premier was held on December 23rd, 1994, in New York City and was released nationwide on Christmas day. In 1994, Disney released 29 films to theaters amongst all of its brands (Disney, Touchstone and Hollywood Pictures), so to reserve this film for its highly profitable Christmas release speaks to the faith they had in the project. Especially when you consider the fact that The Lion King was still enjoying extended box office success and gave it direct in-house competition. It was critically acclaimed, with a Rotten Tomatoes Score of 92%. However it was a box office dud, opening at number 7 and finishing it’s run with $43 million (the equivalent of $67 million today).

Thankfully by 1994, a film could flop in the theaters and still be a hit on home video. Rudyard Kipling’s The Jungle Book sold so strongly on VHS that as Disney picked up speed with its direct-to-video film division, they decided to make another live-action film that more closely resembled the animated film. This time with talking animals, The Jungle Book: Mowgli’s Story made its debut in 1998 and felt like a mash-up of the two previous Disney adaptations. The home video success of this 1994 film may have also inspired Sony to produce a similar film in 1997 called The Second Jungle Book: Mowgli & Baloo.

Watching Rudyard Kipling’s The Jungle Book, it is interesting to see how far the story departs from what most people know to be the story of Kipling’s classic. In a good way, this makes the film feel fresh and unpredictable, but the downside is that viewers may feel mislead. By the second act, the film begins to have more in common with 1999’s Tarzan than 1967’s The Jungle Book, including a moment that feels straight out of the “Son of Man” sequence where Kitty and Plumford are showing slides to Mowgli of how a man should act. I’d be curious to know if the production team on that film wasn’t inspired by these moments and how well they worked. The performances are wonderful, the on-location shooting really pays off, and the story is told so well it’s hard to not get wrapped up in it.

For some reason, Disney has chosen to make this film unavailable on the physical media market. It was released on DVD in 2002 and discontinued in 2005. The assumption was that they would increase demand and release it again in 2007 close to the Platinum Edition of the animated film, but that never happened. Demand has now spiked so high for this film that used copies sell for over $60 on average (new copies go for as high as $90). The good news is that while Disney has no plans to release it on disc again (missing an opportunity to celebrate the 20th anniversary), it is available digitally through providers like iTunes and Amazon.