The Future of Marvel’s Ultimate Comics

In 2000 Marvel Comics created the Ultimate Universe to feature reimagined and updated versions of its classic superheroes.  The Ultimate Universe provided a fresh take that helped inspire the Marvel Cinematic Universe.  Recently, the Ultimate Universe has been in upheaval as the Cataclysm mini-series brought the villain Galactus to feed on the world.  During the event, Captain America made the ultimate sacrifice, and one main difference between the regular Marvel comics line and the Ultimate line is that dead means dead so Cap will not be returning.

The current era of the Ultimate Universe ends in Cataclysm: The Ultimates’ Last Stand #5 by Brian Michael Bendis and Mark Bagley that hits this Wednesday, February 26.  That comic will be followed by Brian Michael Bendis’s and Joe Quinones Survive on March 26 which will feature Captain America’s funeral and the ramifications of his sacrifice.  As that event takes place, the narrative will flash into the world of Spider-Man, Kitty Pryde, and Sue Storm, providing a look forward to the future of the Ultimate Universe. 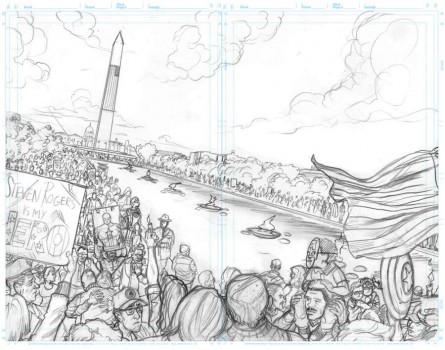 The next chapter of the Ultimate Universe will include three titles.  The first is Miles Morales: Ultimate Spider-Man.  This story follows the young Spider-Man as he has to take his place in the pantheon of heroes.  As writer Brian Michael Bendis says, “What this book is about is how Miles Morales is the Ultimate Spider-Man and how that came to be and what he will do with it.  [Cataclysm] was his bar mitzvah, and he comes out of it ready to take it to the next level.” 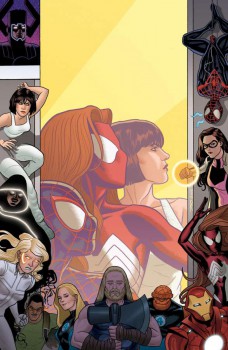 Miles Morales also features in the new title, All-New Ultimates by Michel Fiffe and Amilcar Pinna.  This new team book features Miles, Kitty Pryde, Cloan and Dagger, a new Black Widow, and newcomer Bombshell.   As writer Fiffe explains, “It’s a war zone in the streets of New York, Hell’s Kitchen in particular, where certain neighborhoods have been torn apart by the recent galactic cataclysm and crime is exponentially growing; local super-powered gangs rule the environment, That’s where Miles and the gang come in, to act within a grittier, more immediate problem while trying to find their own footing as super heroes.” 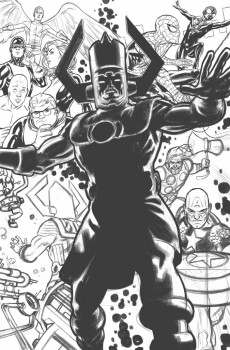 The final new title of the Ultimate Universe is Ultimate FF written by Josh Fialkov with art by Mario Guevera.  While many might think FF stands for Fantastic Four, it actually means Future Foundation; a brain trust that includes Sue Storm, Iron Man, the Falcon, and a new Machine Man.  Describing the team, writer Fialkov says, “They are the line of defense against things that you can’t just hit. That’s always been the great part about the FF. How do you fight a planet eater? If you find yourself smack dab in the middle of an intergalactic war, what do you do?”

This is a new beginning for Marvel.  For those that enjoy the movies that don’t want to be bogged down by decades on continuity, these stories will provide a good jumping on point.  It all begins with Survive March 26.  You can read comics online through Marvel.com, the Marvel comics app, or visit your local comic book shop.