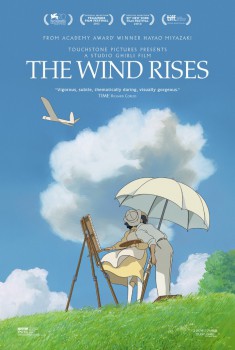 Legendary filmmaker Hayao Miyazaki announced his retirement in September 2013 while unveiling his latest film, The Wind Rises, at the Venice Film Festival. It shouldn’t come as much of a shock to his fans around the world, since it’s not the first time the 71-year old has made such a claim. However, there is something about The Wind Rises that feels so appropriate for the filmmaker to take his bow with that I wouldn’t be surprised if his claims ring true this time.

The latest Studio Ghibli film takes a more historical approach, akin to Grave of the Fireflies and From Up on Poppy Hill (both are Studio Ghibli films, but neither were directed by Hayao Miyazaki). Miyazaki’s first inspiration for the film was a novel by Hori Tatsuo called The Wind Has Risen from 1937 that tells the story of a woman with tuberculosis living in a sanitarium. This tale has been embedded into a fictionalized telling of the life of Jirô Horikoshi, an airplane designer whose aircrafts were significant to Japan’s involvement in World War II. Miyazaki first released his telling of the tale in 2009 as a manga (the Japanese version of comic books).

The film opens with an excerpt from a French poem by Paul Valéry: “Le vent se lève!… il faut tenter de vivre! – The Wind Is Rising!… We must try to live!” Joseph Gordon-Levitt voices Jirô, who is introduced as a nearsighted boy who dreams of flying airplanes. Due to his vision impairment, he will never be a pilot and instead chases a dream to create airplanes. He often dreams of fantastic aircrafts and frequently receives moral advice in his dreams from his hero, Italian plane designer Caproni (voiced by Stanley Tucci). On his journey to fulfill his dreams, he falls in love with a young woman named Nahoko (Emily Blunt) who is suffering from tuberculosis.  His quest to fulfill his dreams is weighed down by the realization that his designs will be used for war. 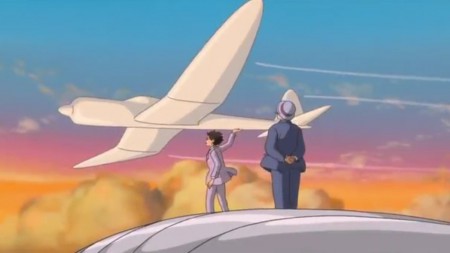 Audiences who have only seen the handful of Studio Ghibli films released domestically in theaters may be expecting another fantasy film, which they won’t find in The Wind Rises. While there are fantastical elements through Jirô’s dream sequences, the story is grounded in reality and anyone aware of the events of World War II will find some scenes difficult to watch. While intended for a more mature audience than Disney’s typical presentation of Miyazaki’s films, those that experience The Wind Rises are in for a rare and wonderful film.

Jirô is an interesting and loveable character, an almost perfect human being. His innocent dream is followed through with hard work and determination. He shows many acts of selflessness, including a heroic act during the Great Kantō earthquake of 1923 that destroyed much of Tokyo. His love for Nahoko is easy to cheer for, even though it is ill fated. Miyazaki was wise enough to show his guilt through his dreams as an adult where he often sees his designs leading to great destruction. This simple device creates sympathy towards a character that could otherwise end up unlikable due to the inevitable outcome. Simply put, Jirô is the type of character that will stick with you for a while.

The film carries a PG-13 rating. Parents concerned about sex or violence can have peace of mind knowing that neither is present in this film. The MPAA cites smoking and disturbing images as the reason behind this rating, and I can attest to both of those being present. Jirô and his friends are chain-smokers, which caused some controversy in Japan last summer when the film was released. The MPAA is more lenient on villains who smoke, but in this case the main protagonist is routinely smoking or asking for a cigarette. In terms of disturbing images, Jirô’s dreams towards the end of the film often end with his planes either erupting into flames or causing big explosions. These images aren’t graphic, but can be intense for those who know the history behind the usage of Horikoshi’s planes on Pearl Harbor. There is also a scene with non-violence induced blood. For these reasons, Disney has avoided associating their name with the film and have instead distributed it under their Touchstone Pictures label. This is an animated film meant for adults, I do not recommend taking children younger than middle school age to see it. 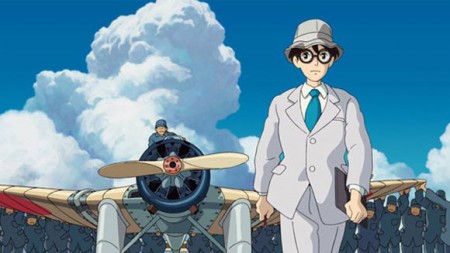 Valéry’s poem is quoted several times in the film and can easily be stated as the theme. Jirô experiences many events and hardships that could crush ones spirit. During a trip to Germany to study how their airplanes are made, he sees first hand the power that is forming there and how terrifying it could become. His own country is incredibly poor due to the great depression and is not technologically advanced enough to defend itself. Jirô makes several comments about his belief that Japan would no longer exist if it went to war. Yet the wind keeps rising, and so he shall live his life to the fullest, doing what he loves best: designing airplanes.

The Wind Rises is quite a departure from the typical fantasy film that Miyazaki is famous for, but at the same time it features many of his recurring themes. One of his biggest themes is flight, featured heavily in almost all of his films. His feminist views are expressed through the strong female characters, including Jirô’s sister who studies to become a doctor (voiced by Tinker Bell herself, Mae Whitman). His films also have a subtle anti-war theme, which is perhaps most obvious in this film. None of the main characters want to go to war, but they also can’t go against their country.

This film has earned Studio Ghibli its third Academy Award nomination for Best Animated Feature. Prior to seeing it, I was convinced that Frozen had little competition for the award. After seeing The Wind Rises, I’m no longer confident. This film features many elements that typically sway the Academy’s votes. It’s not your typical film for its genre, being aimed almost exclusively towards adults. It is based on real historical events that conjure sad emotions from most people, and is also quite heartbreaking. It’s one of two Studio Ghibli films to ever make me cry (the other was Grave of the Fireflies, about two orphaned children fending for themselves after the bombing of Hiroshima). And to top it all off, Miyazaki has already won once for Spirited Away and has claimed this as his last film. Don’t they love to bestow farewell awards to past winners? Time will soon tell which film will win, but Frozen will be given a run for its gold statue on March 2nd.

The Wind Rises is an emotionally moving and inspiring film. It comes as a surprise that these emotions can be felt towards a historical figure whose inventions caused so much destruction, but Miyazaki masterfully creates lovable characters that audiences will find earn their sympathy. As usual, the animation is breathtaking and the characters are memorable. With a runtime of 126 minutes audiences might find the pace to be slow, but the payoff is worth your time. If this is Miyazaki’s final film, he is going out with a bang… or a gust of wind, as it were.  The film was released on February 21st to select cities, with a nationwide release on February 28th, just in time for the Oscars on March 2nd.