In recent years there has been something of an explosion of unofficial themed “days” at the Disney theme parks. While Gay Days have been around since 1991, Bats Day (for goth Disney fans), Star Wars Day (not the official event held at Walt Disney World), Harry Potter Day, Rock Around the Park and Steam Days are of a more recent vintage.

Perhaps the fastest growing of these unofficial festivities is Dapper Day, held twice a year starting with a modest event at Disneyland Park in 2011. Organized by former Imagineer “Justin,” Dapper Day was ostensibly inspired by the original Disney park designer’s illustrations which often featured depictions of well-dressed guests enjoying the park. Ladies in high heels and pearls, men in sharp suits, and even children in coordinated outfits peopled these colorful illustrations that were intended to depict future attractions as well as the idealized public that would enjoy them. 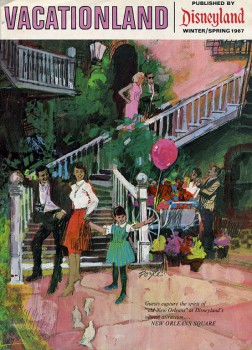 Caption: Cover of a 1967 Vacationland Magazine

In a short time, Dapper Day had been embraced by many, and has evolved into an opportunity to dress up and head to the parks. Within the “dapper” community there are various subsets, including vintage clothing devotees, advocates of steam punk and more recently Disneybounding fans. While dapper visitors had to seek each other out in 2011, this year’s February event brought stylishly dressed guests to every corner of Disneyland. Dapper Day has also spread to Walt Disney World and Disneyland Paris, as well.

Traditionally, there are two “events” held in the park. For the full day event, there is a scheduled time for “dappers” to ride the Mark Twain Riverboat early in the day, as well as the evening “Dapper Derby” at King Arthur’s Carousel. In addition to these, various activities were scheduled at the Grand Californian Hotel, and other venues in or near the Resort. These include the Dapper Days Boutique (vintage clothing and accessories), a pop-up retail shop (official merchandise), a styling suite, and the adults-only evening cocktail party, Folly, held in Downtown Disney at the Jazz Kitchen. 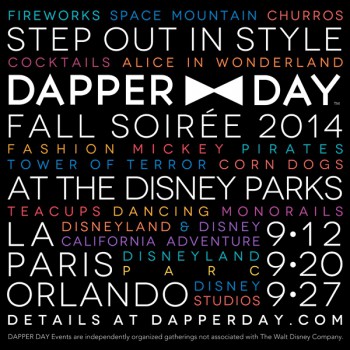 http://www.youtube.com/watch?v=kGrqAM2PQi8&feature=c4-overview&list=UUA3ermB2Eg_pyMYcOb3Pdjg
Video with an overview of Dapper Day at Disneyland, February 23, 2014