October 1st 2001 the Share a Dream Come True parade debuted at the Magic Kingdom and for 13 years that parade, while rebranded with cosmetic and music changes, basically the same parade ran every day down Main St. USA… till March 9th 2014! On this extra sunny and warm Florida day thousands starting lining the parade route as early as parking opening for the “3 o’clock parade” the NEW Festival of Fantasy parade! This parade celebrates everything Fantasy…and Fantasyland! Each float has a kinetic energy to it, with something always moving bringing even more energy to a already amazing line up of floats. 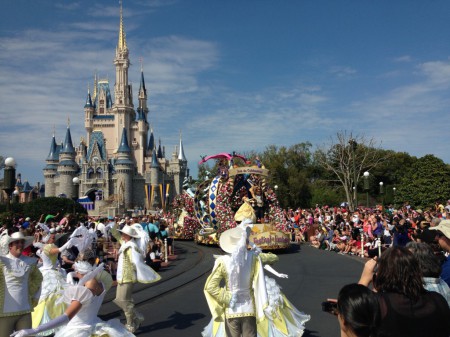 As the announcement started, the music started to build, and the “royal dancers” started leading the way the crowds started to cheer! This parade has a very unique start as the “Princess Garden” is the lead float. This float showcases Cinderella with Prince Charming, Tiana and Prince Naveen from The Princess and the Frog, Beauty and the Beast, and making their Disney Parade debut are Anna and Elsa (with Olaf) from Frozen! 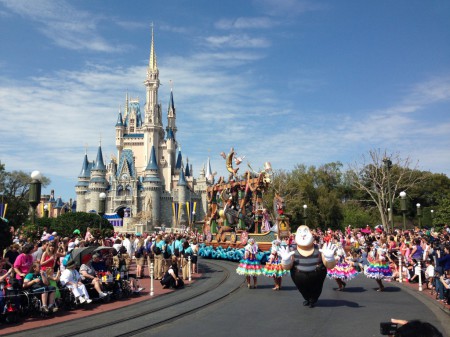 The 2nd float represents the BEST. DAY. EVER! it’s featuring Rapunzel and Flynn Ryder along with a band of thugs and court dancers from Tangled. With Ulf the mime thug and the court dancers leading the way, the Snuggly Duckling looks to have changed to long boat form. This float has such small touches such as a Pascal and the cross eyed goat both with small movements along with the royal horse Maximus hanging on to one of the swinging “weapons” 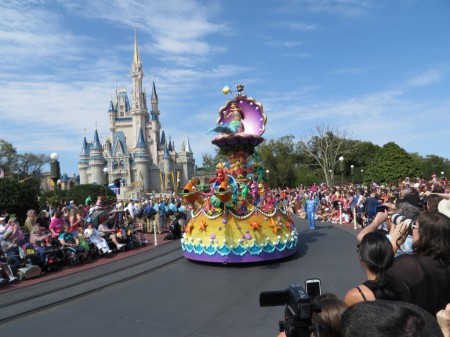 Flowing one of the newest Princesses is of course the Princess that swam into our hearts in 1989, Ariel! This float, described as a “kinetic seashell music box”, is lead by a certain crustacean who some WDW fans may remember from SpectroMagic. That’s right! The old tradition of carrying over the old to the new even happens in parades, Sebastian was relocated from his conducting job in the now gone SpectroMagic Parade to leading Ariel down the parade route!
Right out of Never Land comes the next float lead by the “Newsies-inspired” Lost Boys featuring Peter Pan and Wendy high atop a Rainbow connecting Skull Rock to Tinker Bell nestled in the back of the float on her flower. With Capt. Hook hanging on to the swinging anchor, Mr. Smee trying to catch up, and of course that Hook hunger crocodile brining up the rear this float is pure eye candy! 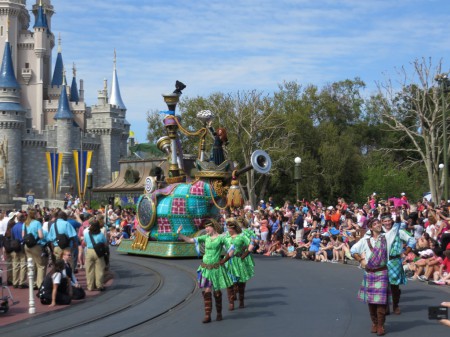 Going from the world of Never Land we land right in the world of the Scottish Highlands with the Disney*Pixar Brave float. With Highland Dancers kicking up their heels as a great lead into a giant set of bagpipes with the strong minded redhead Merida standing atop watching over all. 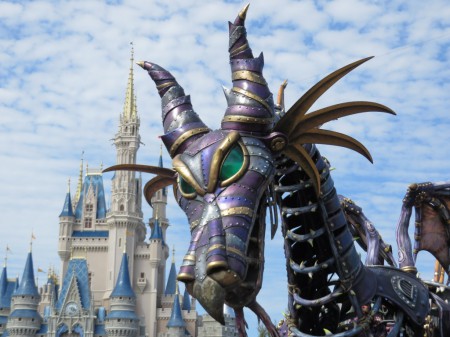 Stepping from the brightness into the darker side of Disney, we have the Sleeping Beauty section of the parade. I will say right now this part of the parade was above all else the WOW moment! Starting of with the 3 good fairies “floating” past to Prince Phillip fighting thorn stilt walkers, raven dancers, and ultimately Maleficent in “steam punk” dragon form this section just blew away the crowd. But what is a dragon without a little fire? Thats right she breathes fire! 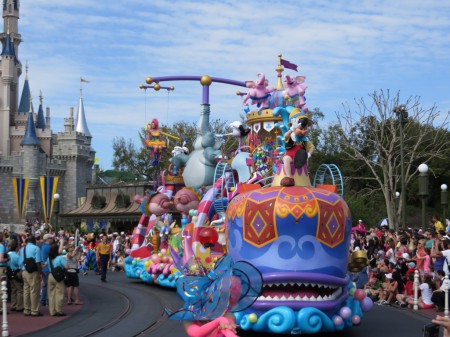 Finally to bring a close to our trip to Fantasyland comes Monstro the whale with Pinocchio and crew leading a large group of classic Disney Characters! And as no Disney Parade would be complete without Mickey and Minnie Mouse they are in Mickey’s Airship float which is the tallest float in the parade reaching a 32 foot mark! 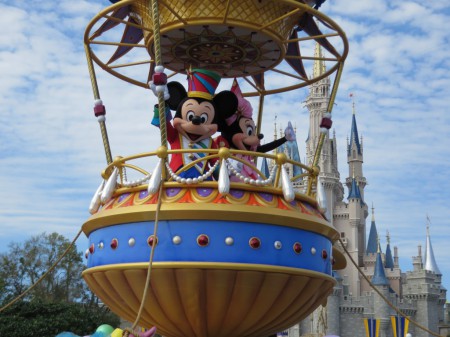 This parade has been over 2 years in the making and worth every minute of it! With 7 of the 9 floats being brand new, the other 2, the Princess Garden and Monstro, were originally used in the Tokyo Disneyland parade Jubilation (thanks for that fun fact Jose Castillo) and a band new score, including some shout outs to parades from Disneyland to Tokyo Disneyland, this parade is a masterpiece! Something that was said over and over again by everyone who worked on it was to see it in different areas because you never know what you might pick up on and where.
The Festival of Fantasy Parade along with the soon to be open Seven Dwarf Mine Train, opening this spring, definitely will be must see additions to the Magic Kingdom!