Wednesday started like any normal day at Magic Kingdom during Spring Break. As the park began to get uncomfortably crowded, the entertainment division sent out an unscheduled appearance of the popular Move It! Shake It! Dance & Play It! Street Party. Tired parents were delighted as their kids quieted down, hypnotized by the loud party music and even louder floats that eased into the Hub. But within moments of the floats arriving, something went wrong. 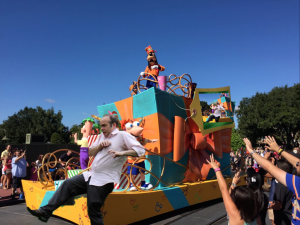 The dancers and characters were still dancing and the emcee had not yet invited guests to join in the fun when a middle-aged man jumped in front of the float featuring Goofy on top with Phineas and Ferb on the bottom. He began to jig uncomfortably as the other dancers looked on in horror and astonishment. The stilted walkers swarmed the guest, ushering him back onto the curb as his face turned bright red. I was on the scene to question some of the witnesses.

“I couldn’t believe what I was seeing,” said Ellie Smith from Monrovia, CA. “Where did this man come from? They clearly hadn’t asked for anybody to dance with them yet. People amaze me! I mean, he didn’t even have a Magic Band on! Who let him in here?”

“I feel bad for the guy,” added James Colburn, a Disney Vacation Club member from upstate New York who comes every year for spring break. “He clearly doesn’t know the drill. I saw his wife and kids nudge him to go dance. He seems like he doesn’t get out much. The whole thing is just very unfortunate.”

“Excuse me, excuse me,” chimed James’ 5-year-old son Dave. “Um… that man ruined the party. I saw Goofy put his hand on his forehead and shake his head like this.” The adorable child reenacted the way Disney’s silliest anthropomorphic dog reacted to what was happening. “I don’t think Goofy likes that guy very much, and Goofy likes all the people in the whole entire world!”

Most guests stayed to watch the rest of the show, many of them participating in the fun when properly invited to dance. But the Pruitt family from Gainesville, FL, witnessed the family walk away. “They headed into Tomorrowland,” said Esther as she pointed towards the bridge to the land of the future. “I’m pretty sure I could see them ducking into Stitch’s Great Escape,” added her husband Matt. “Life keeps handing that guy blow after blow.”

“I feel really bad for the guy,” said a Parade Audience Control cast member named Amanda who was busy asking a guest to remove their young daughter from the trash can she was standing on when the man jumped into the street. “I tried to find him to salvage his day. I was going to offer them a VIP spot at the 3:00 parade, but they took off. I just hope other guests don’t treat him like a ‘That Guy’ from Monster’s Inc. Laugh Floor.” She put her hands on her hips and shook her head with pity.

A reminder of the incident made the jumbo-screens on each float when the social media aspect of the show came to life. There he was again, immortalized in all of his LED glory as guests laughed and reminisced about the moment. Some of the children even tried to jig, mimicking the gentleman’s ridiculous dance. While the day may be ruined for “that guy,” it certainly put a smile on everyone else’s face and made memories that will last a lifetime… or at least until their next Fast Pass is active.