The Ultimate Marvel Marathon: Event of a Lifetime 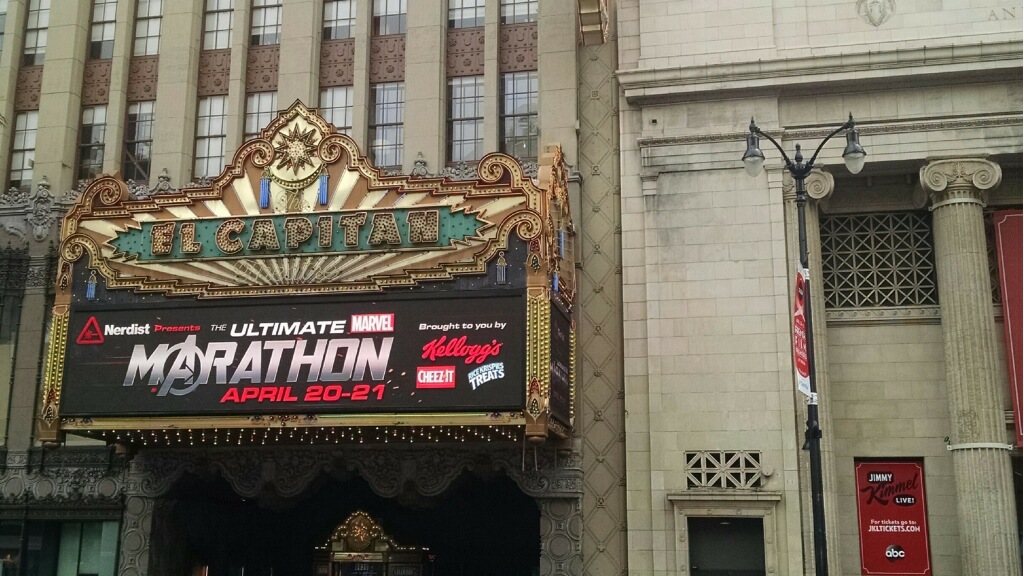 It all started at a panel at WonderCon in Anaheim earlier this month, when fanboy mascot Chris Hardwick and Marvel President Kevin Feige nostalgically recalled anticipating the release of Back To The Future Part III in 1990 with a marathon of Back To The Future Parts 1 & 2 followed by the world premiere of Part III, then pondering if something like that could be recreated for the Marvel movies. Subsequently, they announced at the El Capitan Theatre that they would be doing “The Ultimate Marvel Marathon”, where they would screen all 11 movies in Marvel Cinematic Universe, starting with a screening of Iron Man at 6:00p.m. on April 20th and ending with an 8:30 screening of Marvel’s hotly anticipated new movie, The Avengers: Age Of Ultron, on April 21st. 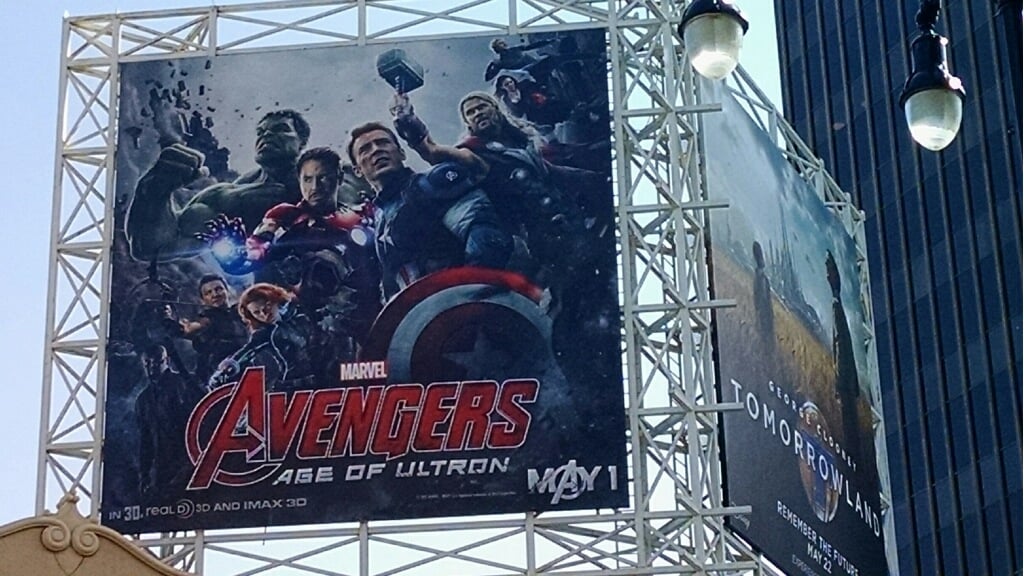 Marathon screenings are, of course, nothing new. The El Capitan Theatre has even done marathon screenings in the past, such as for the Pirates of the Caribbean and Toy Story series. But I’m unaware of any marathon screenings that can top 11 feature-films and span 29 hours, which could currently hold the record for the longest marathon-screening in history. Promised going in were meals (courtesy of Subway, Kellogg’s and Cheez-It) a costume contest, prizes and “a few surprises.” Frankly, all I wished going in was that there would be a bathroom break (thankfully, there was more than one).

After an hour of waiting in a line with 400 people, the night started with a bang. After everyone got a complimentary large popcorn (in an exclusive Avengers bucket) and a large soda, everyone got seated at 6 for the costume contest. Hardcore Marvel fans managed to come dressed as everyone from the six members of The Avengers, to characters like Daredevil, Agent Phil Coulson and Pepper Potts! My personal favorite was a girl who came dressed as a combination of Star Lord/The Rocketeer, the later of which was especially appropriate given that The Rocketeer was the first movie to have its premiere at the El Capitan since Disney’s purchase and renovation of the place in 1991. Ultimately, the crowd’s enthusiastic cheer chose the winners and of course Ultron won the night! 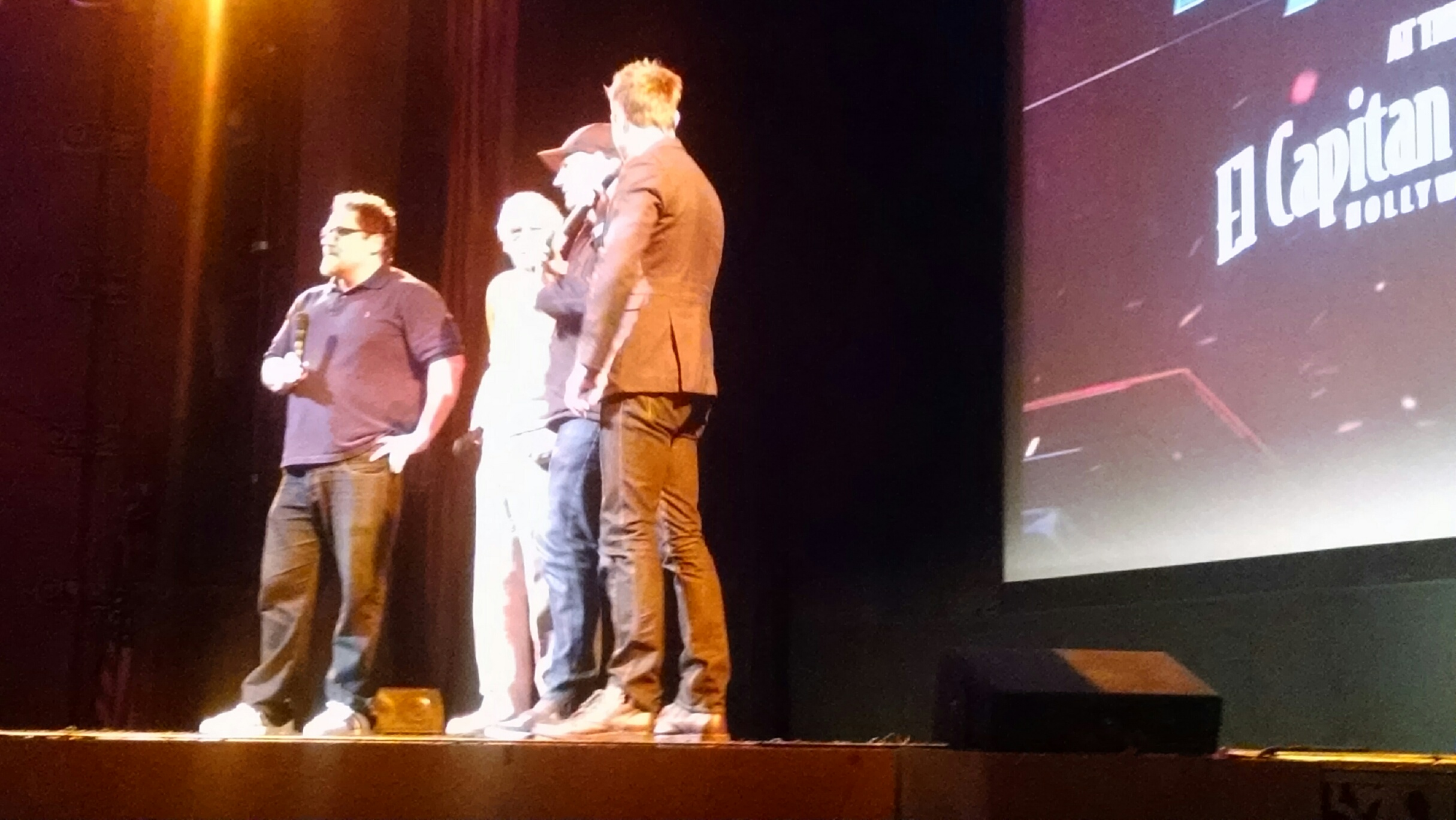 To introduce Iron Man, and thus the night, Chris Hardwick and Kevin Feige came to the stage. The real excitement, however, came when they introduced the mighty Stan Lee, who, as energetic as he’s ever been, announced that he was planning on doing no more cameos…instead choosing to not accept anything less than a supporting role! But not before he did a big “Excelsior!” along with the audience! The audience would later show their appreciation for Stan by applauding every time a cameo of his came up.

As if Stan Lee appearing wasn’t exciting enough, Jon Favreau also showed up! He praised Paramount and Marvel Studios for their risk-taking, explaining that if the original Iron Man had disappointed at the box office, Marvel Studios would’ve went bankrupt and put away any possibility of an Avengers movie coming out as the first Iron Man teased just seven years ago. Stan Lee echoed this emotion, and called Kevin Feige the “greatest producer in history,” explaining how no one else had ever producer such a big and ever-successful string of hit movies as the Marvel Cinematic Universe.

Iron Man quickly screened after that, and our journey began. After Iron Man screened, roughly 25 of the 400 people left and never returned. I couldn’t help but notice that it only took until the 2nd movie, The Incredible Hulk, that a few people started dozing off. The El Capitan staff did everything in their power to make the screening pleasant though, as they gave out prizes, which consisted of toys, backpacks and VIP tickets to the El Capitan, in-between every single film. They also gave out gifts in-between each film, from snacks such a Rice-Krispie treats and Cheez-Its, to a Thor comic and Avengers trading cards to a toothbrush and toothpaste! One of the more amusing and memorable ways they tried to energize the crowd was to pick people from the audience to dance a WWII-era style dance right before a screening of Captain America: The First Avenger.

In one of the more memorable surprises, right before The Avengers screened, Clark Gregg a.k.a. Agent Phil Coulson, came to the stage! When asked how it felt to still be playing a character that basically started as a cameo in Iron Man, he stated, “Dope!” He elaborated that he was basically living 11-year-old him’s dreams, and that it was great to still be playing the character after he got killed. He then introduced a teaser for the upcoming season of Agents Of Shield. It was also revealed that the donuts given out alongside breakfast were actually purchased by him; that alone is reason enough to respect him.

As the Phase 1 films concluded and Phase 2 films started with Iron Man 3, we started getting more celebrities to help introduce the film and answer question from columnists from Nerdist.com. Before Iron Man 3, screenwriter Drew Pearce came to the stage, telling the audience how the script for the film got completed before The Avengers got released, so he never really felt nervous about writing “the follow-up to The Avengers” like he probably should’ve. Most interested was when he was asked about the controversial Mandarin reveal in the movie, he explained he chose that path because he felt the Mandarin in the comics and tv show was “racist propaganda.” 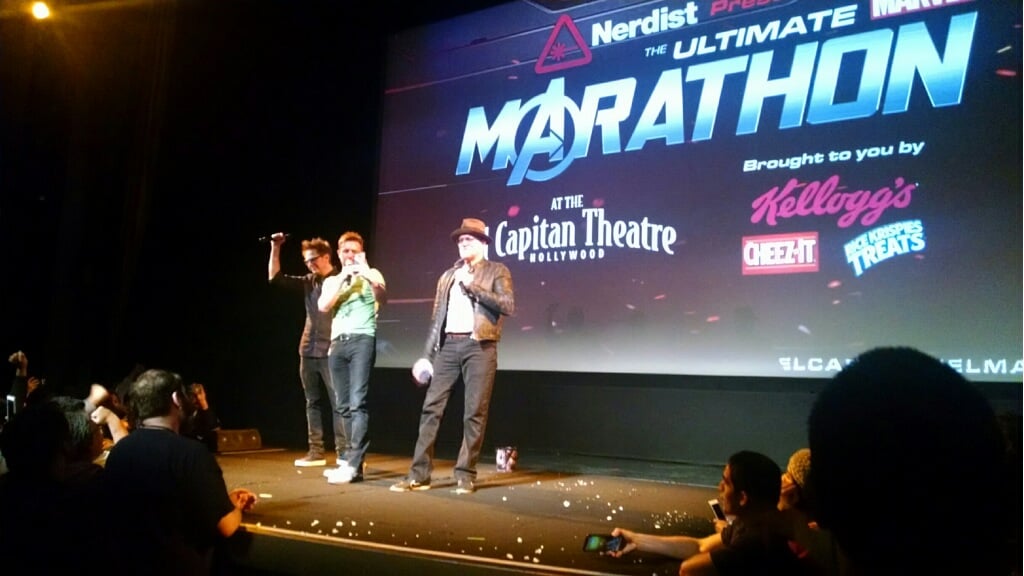 Before Thor: The Dark World, producer Craig Kyle and Lady Sif herself (Jaime Alexander) joined to introduce that film. Jamie Alexander even posed for a selfie for Twitter. Before Captain America: The Winter Solider, actor Maximiliano Hernandez (who plays Agent Jasper Sitwell) and Deborah Ann Woll (who has been getting a lot of attention for her role in Netflix’s Daredevil series) showed up. For my money though, the most fun introduction was proceeding Guardians of The Galaxy, when director James Gunn and Michael Rooker, who plays Yondu, came to the stage. They both were both as energetic as all get-out (Michael Rooker even fell on stage only to a flip and get right back up) and had hilarious pieces of conversation. When Gunn was asked if there were any special Easter Eggs in Guardians, Rooker interrupted and said, “I never got this ‘easter egg’ thing, what is that is it like eggs?” to which Gunn replied, “Sorry to inform you, but the Easter Bunny doesn’t exist!”

When it was finally time to see The Avengers: Age of Ultron,they escorted everyone out of the theatre, and made sure they collected everybody’s phone, camera and any video-recording materials. Once everyone got back in, they drew a lucky winner from all the people who stayed through all 11 movies to go to the world premiere of Ant-Man, coming out this July! This was followed by showing a new trailer for Ant-Man not yet screened to anyone else. After that was time for The Avengers: Age Of Ultron.

Since the movie doesn’t come out until next week, I won’t bother reviewing the movie, but in a very short synopsis: I liked it. I thought it improved some of the issues I had with the first movie, therefore giving it an edge over the original. I imagine it’ll be one of the highlights of the summer, however, since Howard The Duck didn’t make a cameo in the film, it certainly can’t claim to take the top stop of the eleven films screened.

I will say as enjoyable as the movie was, the real thrill of this event was the adventure of the marathon itself. The idea of spending an entire day and a half of your life watching movies may seen extreme in some people’s eyes, but there is something thrilling about accomplishing such a bold and unusual adventure not many would be able to pull off willingly or physically. And to share the accomplishment with a very enthusiastic crowd made the event as exciting and fun as anything I’ve ever done. As was pointed out by the manager of the El Capitan, this is an event one can tell to their grandchildren one day. It certainly was 2 nights and 1 day I can’t imagine ever forgetting and am wanting to enthusiastically share with as many as possible. I also can’t stress how excellent the El Capitan staff was in their patience and their willingness to give and make the guests’ night as hassle-free and enjoyable as possible. All in all, one can say this lifetime experience was quite Marvel-ous.