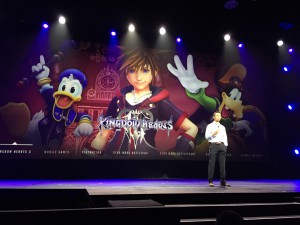 On the final day of the D23 Expo, Disney Interactive welcomed nearly 5,000 fans to Hall D23 to get a glimpse at some of their highly anticipated upcoming games. James Pitaro, co-chairman of Disney Consumer Products/Disney Interactive, was the host for the presentation and he informed us early on the order in which the games would be presented. The audience gave loud applause and cheers as he listed off the slate: Kingdom Heats III, Mobile Games, Playmation, Star Wars Battle Pod, Star Wars Battlefront and Disney Infinity 3.0. 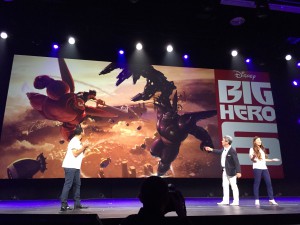 Shinji Hashimoto, Larry Sparks and Kaori Takasue from Square Enix took the stage to discuss the highly anticipated third installment in the Kingdom Hearts series. They had previously announced that Tangled would be included in the game, but they broke the news that there would be a Big Hero 6 level in this game and the audience cheered as Baymax came out to help explain the story. At the end of Big Hero 6 (SPOILER ALERT!!!) Baymax was lost into another dimension and Hiro rebuilt him. In this game, that lost Baymax has been turned evil by a dark power and now Sora and the new Baymax must face-off against his evil counterpart. 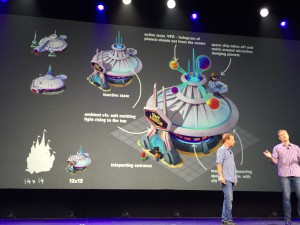 To introduce Disney Mobile, James Pitaro boasted about how Frozen Free-Fall has four million daily players. He promised that more levels are coming as he welcomed Scott Humphries and Tom Morris to the stage. Tom is an Imagineer and Scott is a game designer. The two of them have partnered on an exciting mobile game for Disney Parks fans called Disney Magic Kingdoms. It’s a leisurely game that allows you to build your own Disney park and interact with the attractions and park icons. In addition to the castle centerpiece, they teased images of Space Mountain and California Screamin’. It looks like a lot of fun. 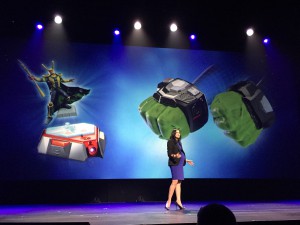 For Playmation, Afsoun Yazdian explained that her two boys love playing with interactive toys. The concept behind Playmation is that the toys play back and react to you, putting you inside the story. The launch line of toys is Marvel’s Avengers and she had a demo reel of real kids trying out the toys. They looked like tons of fun and made me wish this was around when I was growing up. While the Iron Man starter pack has already been announced, she broke the news that the second set will be called “Gamma Gear,” themed to The Incredible Hulk. The gamma gloves can pound and slam and the toys level up and become stronger the more you play with them. One of the best things about this technology is it doesn’t require wi-fi, so kids can truly take these toys anywhere, including outside, and not lose any functionality. There is also an app that can connect to the toys via Bluetooth, offering a visual element to the imaginative play and also opportunities to upgrade your pieces. 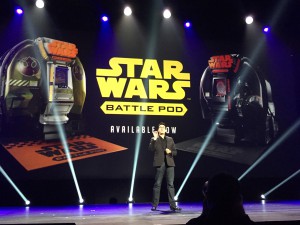 Star Wars Battle Pod is a new arcade game from Bandai Namco and Denny Chiu presented a tease at what the game will be like. It seems like a highly immersive experience with a wrapped dome screen and realistic effects. The arcade game will be available to play this fall at places like Dave & Buster’s, but for the elite Star Wars fan, there’s “Battle Pod Premium,” a deluxe in-home version with a responsive leather seat, a plaque with your name on it and your name in the game’s credits. It comes in two version, Rebel Alliance or Darth Vader, and can be yours for the low, low price of $100,000. 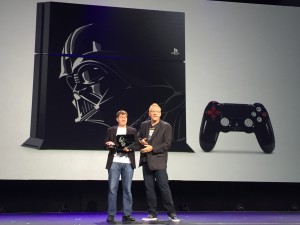 The game that about half the audience seemed to be waiting for was Star Wars Battlefront. Adam Boyes from Sony PlayStation introduced an exclusive Darth Vader PS4 system that will be available bundled with the game. PlayStation is trying to become the number one console for Star Wars fans by also offering an exclusive Disney Infinity 3.0 bundle with Boba Fett, who won’t be available for retail until several months later.

As for the game itself, Justin McCully from EA Games announced some impressive details. The game makers were given access to the Lucasfilm Archives and were able to make the props and costumes in the game exactly like the real items, down to the last detail. In addition, the team went to Abu Dabi to visit the set of Star Wars Episode VII: The Force Awakens to help them create the new DLC level “The Battle for Jakku.” And one of the best announcements was that this digital add-on to the game will be free! It will be available on December 8th, but fans who preorder the game get it a week early on December 1st. 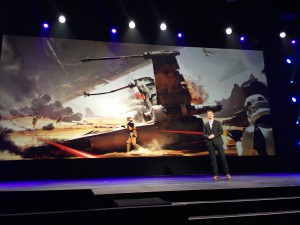 Battlefront is an online multi-player game capable of supporting up to forty players at once. You can become your own hero or villain in the game and join friends on co-op missions. There is also a flight battle level called “Fighter Squadron” that is up to twenty players. By the time Justin was done hyping up the game, it seemed like every member of the audience was ready to pre-order.

Last, but certainly not least, John Blackburn and John Vignocchi from Disney Interactive came on stage to reveal some new announcements for Disney Infinity 3.0. They debuted a trailer for the Star Wars “Twilight of the Republic” Toy Box, which is based on The Clone Wars animated series. The Inside Out game is a puzzle platform and you play as the emotions traveling through Imaginationland while Riley has a nightmare. 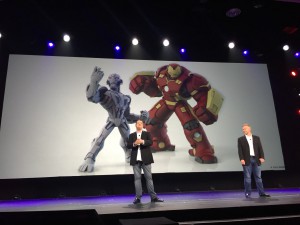 The first figure announcement was that there will be a new Marvel play set called “Battlegrounds,” which will work with all of the 2.0 Marvel figures and features a new style of play never before seen in Disney Infinity. The two Marvel figures that will be released during 3.0 are Ultron and Hulk Buster from Avengers: Age of Ultron.

They prided themselves on introducing over 5,000 virtual toys into this Toy Box. Among the new pieces are the El Capitan theater, which you can enter to watch Toy Box TV, and Flynn’s Arcade which will allow you to have “Toy Box Matches.” A new Toy Dispenser makes it easier to get new toys in your Toy Box. Other new toys include Main Street USA facades, Elsa’s Ice Palace, Mad Tea Party, Big Thunder Mountain and Splash Mountain. 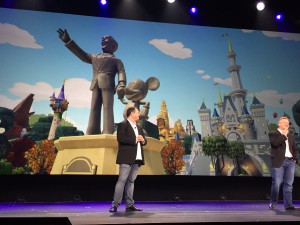 Disney Parks travelers will continue to unlock exclusive toys in 3.0. A Walt Disney World Magic Band will unlock the Walt and Mickey Partners statue and for the first time ever, visitors to Disney Cruise Line will be able to unlock extra content. Oceaneer Club bands will unlock the Disney Dream ship as a vehicle and there will also be a Castaway Cay toy box. With this announcement, they also hyped that a Disney Infinity play area is coming to the ships and will include both physical play areas and the video games for kids to enjoy on their Disney Cruise. 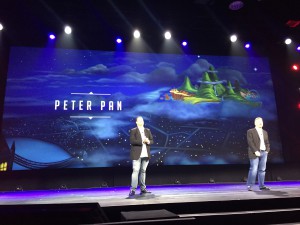 There were more character announcements. Last year, the top Toy Box designers were invited to Disneyland to participate in the Toy Box Summit. At the event, the players got to nominate and vote for a character to include in the game and they have chosen Peter Pan for 3.0. He will be available as a special Toy Box Artist’s Choice edition, a new series that will see one figure released with each future game. He will be available next August.

Spot, the human boy from Pixar’s The Good Dinosaur, will be a future release along with a Power Disc four-pack featuring ride-on dinosaurs from the film. Judy Hopps and Nick Wilde from the upcoming Disney animated feature Zootopia are also coming sometime in early Spring. For Star Wars collectors, they are releasing special edition versions of some of the characters with light-up lightsabers. The figures will play the same in the game, this is purely for super fans who want that extra special touch for their figures. 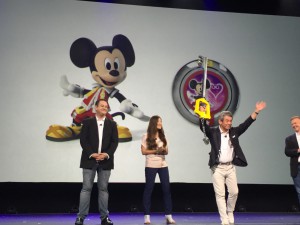 The final announcement was the reveal of the unlockable item when you have collected every figure and power disc for 3.0. Fans went wild as Shinji Hashimoto returned to the stage holding a giant Key Blade from Kingdom Hearts and announced that the hidden item is Sora’s weapon from the popular game. But wait, there’s more. Then the creators announced that for everyone in attendance, they would not only received the new 3.0 Mickey Mouse figure, but an exclusive Power Disc that grants Mickey his Kingdom Hearts costume in the game. This Power Disc had a limited edition of 5,000 and will never be released for general sale. 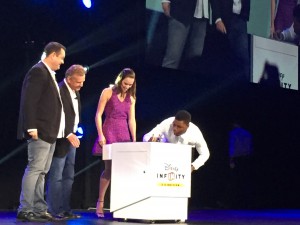 The last surprise was bringing out John Boyega and Daisy Ridley from Star Wars Episode VII: The Force Awakens to debut the Infinity figures of their characters, Finn and Rey. They gave their figures to two lucky members of the audience and autographed them before everyone made a mad dash to the exit to pickup their gift. It was the perfect send-off to an awesome presentation that made me realize that Disney is guaranteed to take all my money with this incredible slate of games coming soon to an electronic device near you.