Questions and rumors about Shanghai Disneyland abound.  As Disney’s newest theme park prepares for its debut June 16, 2016 there are so many questions still unanswered.

I was privileged to preview SH Disneyland in May during Trial Operations, and was truly impressed with the scope of this park (even after seeing all the other Disney castles).  Opening with five noteworthy E-ticket attractions and three stage shows, SH Disneyland is poised to be a key player among Disney parks. 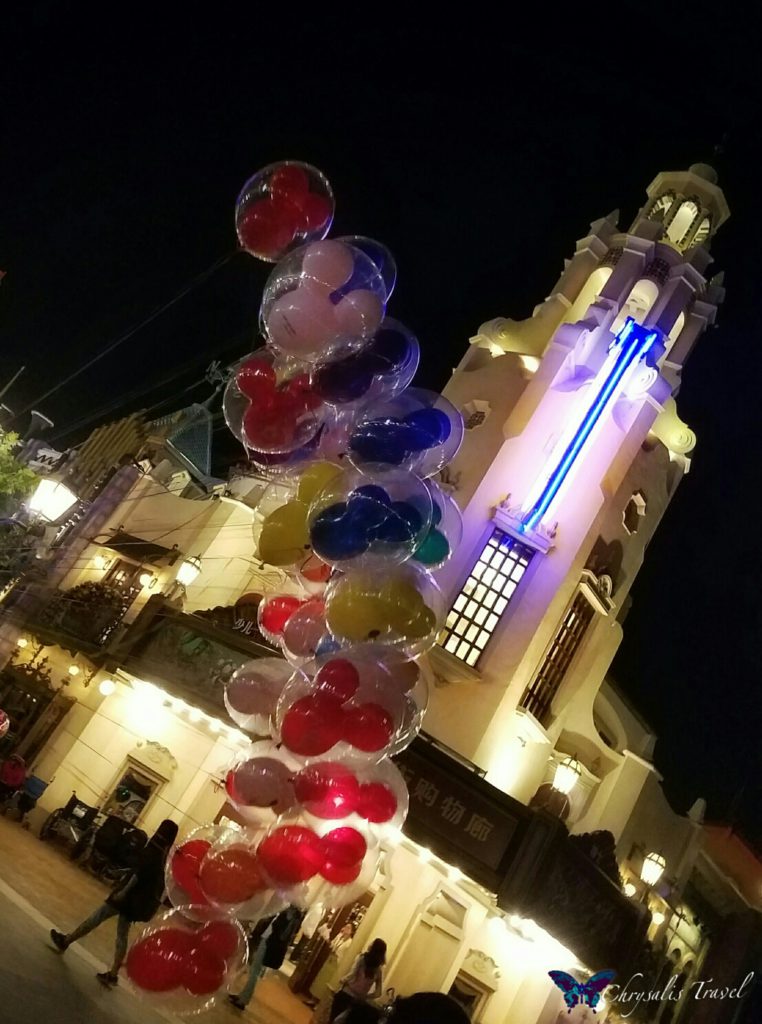 The local population in China has not had the same exposure to Disney characters that the Western world has.  Many Disney films were never released in China.

Chinese guests know Mickey and Minnie.  They adore Winnie the Pooh for being cute, cuddly, and red and gold (popular Chinese colors).  They love Anna and Elsa.  Other characters may all be new to the locals.

Whimsical is the rule, reminiscent of Toon Town.  The Bank – resembling a giant vault – belongs to Scrooge McDuck.  Minnie signs autographs at Sweethearts Confectionery.  Pluto greets guests where the flag pole would usually be.

As you enter Mickey Avenue, shopping is on the left (Avenue M Arcade replaces the Emporium).  Food is on the right – Remy’s, the Confectionery, and Chip & Dale’s Treehouse Treats.

Many storefronts line the street, but not all are actual shops.  (Contrary to the signage, there is no Barber Shop).  Windows above the shops have potential room for future honorees.

Sleeping Beauty inspired Disney castles in Anaheim, Paris, and Hong Kong.  Cinderella constructed large castles in Orlando and Tokyo.  So whose castle is this?

SH Disneyland built this castle as a tribute to all the Princesses.  It is as impressive as it is massive.

As you circle around, you notice that the Castle changes from each vantage point.  Wooden accents. Balconies.  Gargoyles.  Forest animals.  Seashells.  External stairs and a sky bridge. A lofty central hall recreates the magical ballroom scene from Beauty and the Beast, complete with chandelier and stars set against a cobalt blue sky.  Four mosaic murals sparkle along the inner walls, featuring Rapunzel, Merida, Tiana, and Anna and Elsa.

The Castle is home to the “Once Upon a Time” Adventure – a Snow White walk through attraction.  Royal Banquet Hall, the park’s only table-service restaurant, features character dining with Mickey, Minnie, Donald, and Daisy on the second floor (ADA accessible by elevator).

Of course, there’s a Princess meet and greet at Storybook Court.  The SH Disneyland castle is the first one extensive enough to include a boat ride attraction: Voyage to the Crystal Grotto (think Jungle Cruise, fairytale-style, with top-notch special effects in the Grotto).

Gardens of Imagination form a new Land in the hub of SH Disneyland.  Filled with peaceful reflective waterways and mismatched bridges, these Gardens lead you to an ideal photo opportunity with Storyteller Walt and Mickey.

Notably, this is the first time Dumbo and the Fantasia-themed Carousel are located in front of the Castle.

Yes!  Turkey legs and churros are available on food carts. I saw popcorn in butter and caramel flavors.  (Tokyo DL has at least 5 different flavors of popcorn – including curry, soy sauce, and honey – differentiated by exclusive cart locations on the map). There are many quick-service restaurants and food stands serving mostly Asian fare, ranging from dim sum and noodles to bakery goods.  I did not see any flattened Korean Squid in Shanghai (popular at Hong Kong Disneyland food carts).

Coke lovers, be prepared.  In a surprising break from tradition, Pepsi is a sponsor of Shanghai Disneyland.  Coke is served at all other Disney parks around the world.

5.     Can I make reservations for the Blue Bayou? 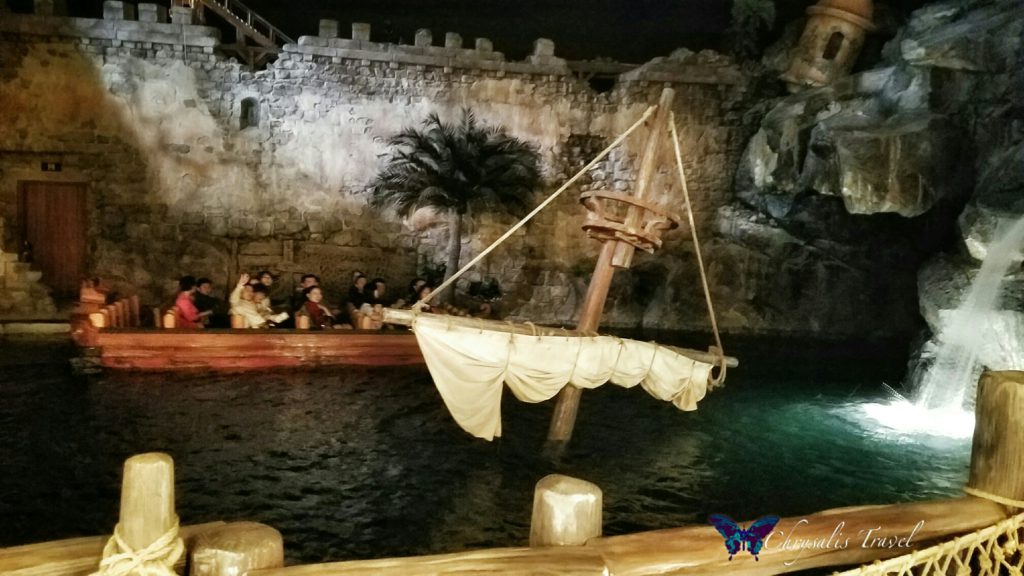 Walking into an expansive hall, you choose from several food bays (each with a different menu).  Gathering your meal – served on pirate compass-themed plates – you wander through a pirate’s lair. 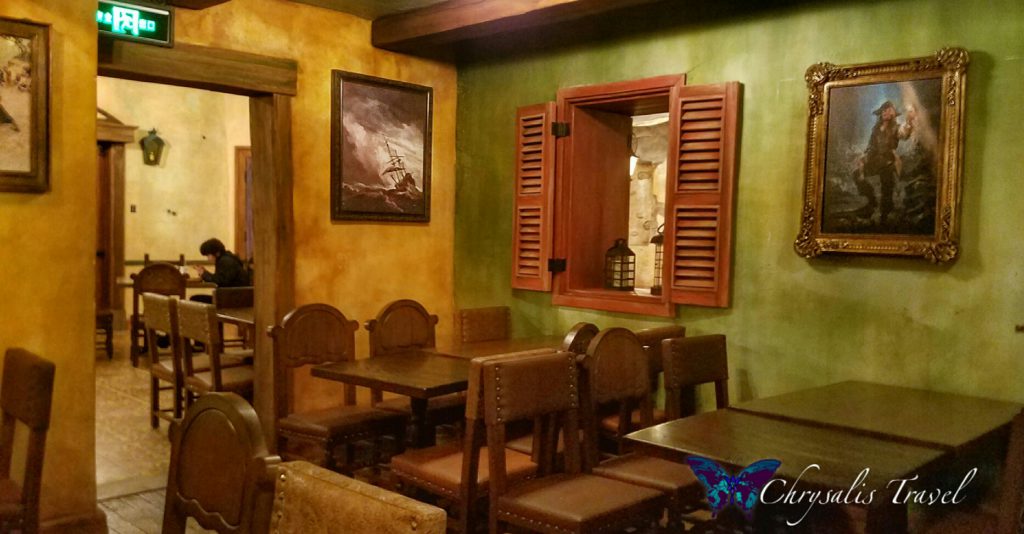 Portraits of Jack Sparrow, Elizabeth Swan, and Angelica (Penelope Cruz) garnish the walls.  Each dining chamber is designed with true pirate flair.  You almost expect them to reappear, as they’ve just briefly stepped away. You pass rooms dedicated to women pirates, and Royal British Naval officers of Jerry Bruckheimer’s Pirates films.  You finally settle down at the iconic waterfront table seating.  Adjacent is a remarkable rum cellar, stacked to the ceiling with barrels and barrels of rum.

6.     Are there Fastpasses for Soaring?

Yes!  Martin Short will be glad to know that Soaring Over the Horizon has Fastpasses.  Be sure to plan for this one early as the Standby line for Soaring reached 6 hours during Trial Operations. Fastpass is not available for Pirates of the Caribbean – Battle for the Sunken Treasure, or Voyage to the Crystal Grotto.

Chinese historically have been very superstitious, and they are not fond of ghosts or hauntings.

Hong Kong Disneyland did not open with a Haunted Mansion.  Instead, GPS-guided Mystic Manor was added later. Mystic Manor is more whimsical and hints at the supernatural, rather than dead ghosts.  Similarly, Shanghai DL has not invited the 999 Happy Haunts to their park.

Restrooms.  This topic isn’t often discussed, but is very important.  It’s a bit of a culture shock if you aren’t prepared.

Squat toilets (a ceramic toilet pan in the ground) have been traditional for Asian populations for centuries.  While still used occasionally in Japan, squat toilets are standardly used in China.

The squat toilets at SH Disneyland are easily spotted: 1) they are the first ones you see coming in, and 2) there are two small steps leading up to the stall.  Restrooms are approximately 80% squat toilets, and 20% ‘Western’ toilets (what we’re used to).

Tip:  If you see 2 small steps, keep walking.  Traditional Western toilets are on level ground, and sometimes marked with the handicap symbol on the stalls.

Yes, there will be.  Club 33 is situated above Mickey Avenue.  The entry is down a small walkway on the left side, between Il Paperino and Avenue M Arcade.

The walls around the entry are painted with an Eyvind Earl-style Sleeping Beauty mural.  Painted street numbers appear natural to the casual observer – 31, 32… 33.

10.   Can I get Mickey ears with my Chinese name embroidered on them?

Yes, and no.  Actually, unless you were born with one, you don’t really have a Chinese name.

Cast members can match your English name to the approximate sounds of Chinese characters – hopefully with a pleasant meaning.  That becomes your ‘Chinese name.’

Many people, including famous Hollywood actors, have names created in Chinese that sound similar to their English names.  Mickey and Minnie ears are available on Mickey Avenue.

What are you most excited to see at Shanghai Disneyland?  What burning questions do you have?  I’d love to answer them.  Please share your comments with me @ChrysalisTravel