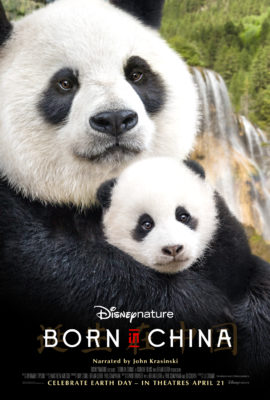 Disneynature returns to theaters this Earth Day with Born in China. The past three films (Monkey Kingdom, Bears, and Chimpanzee) focused on a single species, but Born in China is a return to form of the series’ earliest films, which covered many types of animals. Most notably, panda bears have been the focus of Disney’s marketing for this film. But audiences will find many other amazing and beautiful creatures throughout this journey through the lesser known parts of China.

The film begins with a look at the red-crowned crane, a mystical animal that has fascinated the people of China for thousands of years. It is said that every time they take flight, they are carrying the spirit of a departed creature to the next world. This deep and meaningful theme sets the tone for this beautiful and inspiring film. 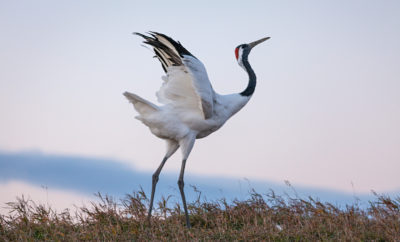 The film spends most of its time covering the journey of four animals. In addition to pandas, we get to meet golden snub-nosed monkeys, chiru gazelles, and snow leopards. Like other Disneynature films, all of these animals are explored through their family dynamic. The timeline of the film covers slightly more than a year, beginning in spring and covering the challenges each family faces during each season.

The star panda in Born in China is Ya Ya, a first-time mother. Her story is sweet, as she lives a relatively carefree existence eating 40 pounds of bamboo a day and caring for Mei Mei, her daughter. Ya Ya’s biggest challenge is learning to let go as Mei Mei grows bigger and yearns to climb trees. 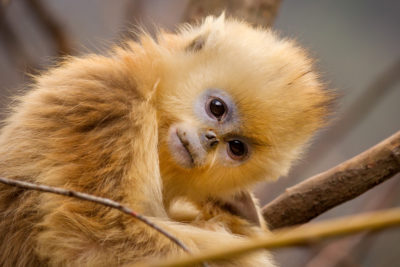 The biggest laughs, and there are plenty of them, come from the snubbed-nosed monkeys. TaoTao is a 2-year-old when we meet him and his parents recently gave birth to a sister. Not getting enough attention, TaoTao leaves his family to join the “Lost Boys,” a mischievous band of brothers. But when TaoTao begins to miss his family, he will have to prove himself in order to be let back in.

Audiences will witness the Chiru migration as the females leave the males behind and journey to the Zhouonai Lake to give birth and raise their young. It’s a beautiful journey and baby Chiru are as adorable, charming, and clumsy as Bambi was in the animated classic. These remarkable animals instinctively learn how to run quickly and stay close to their mother during the long journey home to be safe from predators. 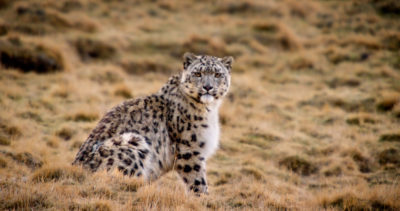 Dawa is the name of the snow leopard in the film, who has two daughters to care for and protect. As a single-mother, she must not only secure a safe space for them to live, but also be an expert hunter to ensure their survival. Of all the animals featured, she faces the greatest challenges and becomes the emotional anchor of the film.

John Krasinski from The Office is your celebrity narrator for this outing and I doubt anyone could have done better. His voice is full of charm and he navigates the film’s humor effortlessly. But with warmth and compassionate tones, he also strikes the perfect emotional chords during melancholy moments. Born in China is instantly one of the strongest films in the Disneynature series. It has the humor and heart of the great ones that came before it, like Monkey Kingdom and Chimpanzee, and leaves you with unforgettable stories. But it also features the first unsuccessful struggle of one of the film’s heroes, which makes the symbolism of the red-crowned cranes incredibly poignant and is the reason they bookend the film.

The narrative refrains from any preachiness about animal conservation. It fails to mention that the Chiru have been nearly hunted to extinction and that there are less than 2,000 pandas in the wild today, but hopefully it inspires audiences to learn more about these amazing creatures and how precious they are. For audiences seeing Born in China during its first week (April 21st-27th), $0.20 of each ticket will become a donation to the World Wildlife Conservation Fund to benefit wild pandas and snow leopards. That organization also welcomes donations all year round if you feel like doing more to help these beautiful animals. 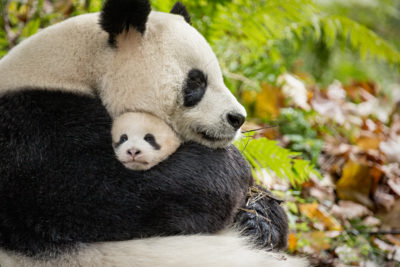 Born in China is all at once the funniest and saddest Disneynature film to date. It’s full of joy and wonder, revealing the hidden beauty in the farthest corners of our ever shrinking world. It’s a perfect way for families to celebrate Earth Day with an entertaining glimpse into the lives of some truly amazing creatures.

I give Born in China 5 out of 5 baby panda tumbles.