Captain America is a dictator! Picking up from Secret Empire #0, Steve Rogers, has consolidated his power and as the leader of Hydra, he has captured the United States. Now the Supreme Leader, he is burdened with trying to make the country work, while crushing dissent from heroes that have turned terrorists in Secret Empire #1. This is not a world for hope or optimism. America is now run with authority, and dissent will not be tolerated. 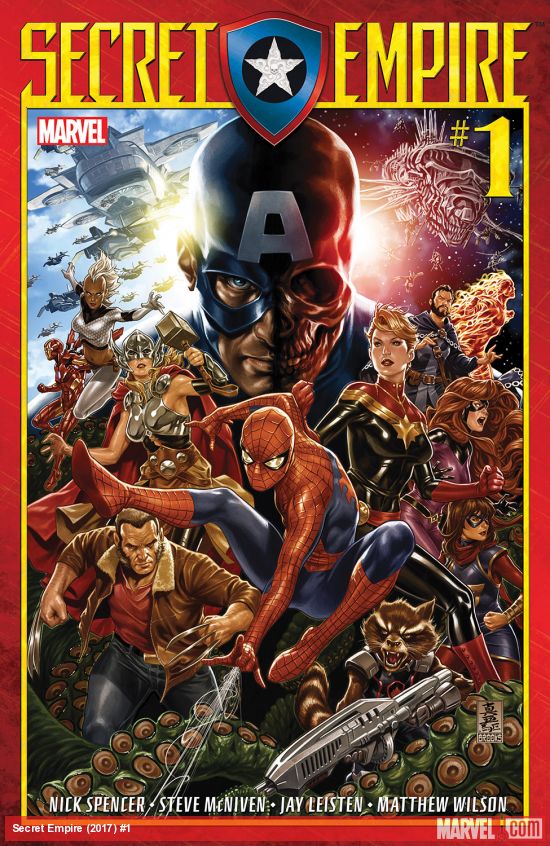 The world Hydra controls is very different. Schools start with a Hail Hydra pledge, children are taught to turn in anyone they see acting different including family members, and if you are an Inhuman, you are being aggressively pursued by the Hydra authorities. Everyone is expected to follow the law.

This expectation makes the people who rebel, targets. Resistance to the new way of life is small, and the people we regarded as heroes are now left to make sabotage attacks, which are labeled as terrorist activity.

This world seems to have no hope, and as the comic ends, we see a Captain America that is a bad guy in total control.

Having read Secret Empire Issue #0 I thought I knew where this storyline was going and tried to predict the outcome of this comic. Boy was I wrong. Usually when the good guy turns out to be bad, there is some formula to reform the wayward good guy. With Secret Empire #1 there is little hope for salvation for Captain America. Hydra and Captain America are in charge and it’s scary.

Poor Captain Marvel is left outside the planetary defensive shield to fight off an infinite amount of Chitauri invasions, bent on killing her. Iron Man and the rest of the Avengers are left hiding in Nevada, Dr. Strange is left in the blacked out dimension that has enveloped New York City.

Things are terrible in the world, but writer Nick Spencer highlights the greatness of total control. Being ruled by a despot has high employment rates, a low crime rate, and as Captain America says in one very awkward exchange with Sharon Carter, “an improvement in standardized test scores”.

Behind the curtain of totalitarian control lies scheming of the highest sorts. Watching Captain America sit through endless meetings as the Hydra elite scheme for control is fun. You can see the boredom emanating through his Captain America suit. At the same point, these are things a supreme leader would have to do when controlling a country.

Hydra is not done with the United States. They want to control the world, and through these meetings we learn that they are manipulating the water supply of many countries with drugs in order to make the citizen more compliant for conquering. This borrows from the Batman Begins movie, but it’s a common use in many story lines.

The climax of the story is focused around Rick Jones, former sidekick to Captain America. Locked away in prison, he has somehow sent a courier named Rayshaun Lucas to the heroes in hiding. Rayshaun has an important item that could help win the war. But no one believes him. Even when Rayshaun gives it to “the Drunk” the AI essence of Tony Stark, Tony doesn’t want to deal with the info, because even he has lost hope.

Steve Rogers, the man who fought for good, and would defend anyone, has finally committed an act that is heinous, and destructive; the execution of Rick Jones. For much of the comic, readers can suspend their hatred for Captain America because in many ways, he looks and sounds the same. At many points in trying to convince Sharon Carter not to leave him, Rogers talks about how he is trying to do what’s right for the world.

She doesn’t believe him, and neither should the reader. The exchange between the AI Tony Stark and Rayshaun shows how pointless it all seems. The hope Rayshaun has is that there is a chance to save Captain America, but Stark cuts him down with examples of failed missions when they thought Captain America was a clone, or mind controlled, and those chances turned into failures and caused the deaths of hundreds.

There are no chances left, just survival. The fear of when your greatest hero turns bad, and the consequences is happening. There is nothing that can be done to stop Captain America.