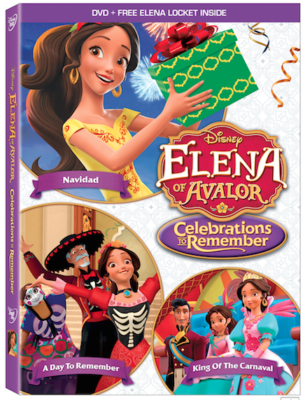 Elena of Avalor returns to DVD for its third collection of episodes with Clebrations to Remember. The emphasis here is on holiday-themed episodes and it shines a spotlight on Dia de los Muertos, Navida, Carnival, and Quinceañera. You and your family can celebrate these fun celebrations with Elena and all of her friends.

In “A Day to Remember,” Elena and her family are excited to celebrate their lost loved ones on Dia de los Muertos. But when Elena discovers that her amulet gave her the power to see ghosts on this holiday, she ends up helping a grandmother reconnect with her grandchildren, who are having trouble keeping the family restaurant afloat.

The spirit of “Navidad” is alive and well when Elena and her family find themselves torn between all of the invitations to celebrate with residents of her kingdom. The themes of family and community start to feel lost in the shuffle, so Elena decides to unite the kingdom with one big celebration. But when Doña Paloma gets a little greedy, Elena will use her musical talents to help her understand the true meaning of the Christmas celebration.

“King of the Carnival” finds Elena and her family preparing a float for the Carnival parade. But when some of Esteban’s old friends return to town, he is blackmailed into returning to his devious ways to help them steal the crown jewels. But when his conscience gets the best of him, he confesses to Elena and helps retrieve the stolen jewels, becoming king of the Carnival in the process.

When Naomi comes to stay with Elena while her parents are away, it is revealed that she missed having a birthday party last year. Elena decides to make up for it by throwing her a belated Quinceañera, causing Esteban to teach Naomi the ways of acting like a proper lady in “My Fair Naomi.” But when things get carried away, Naomi looses sight of what a birthday is all about – celebrating with those closest to you.

In addition to these four episodes, there are two bonus episodes and a keepsake for kids to cherish. Elena of Avalor: Celebrations to Remember will give kids an excuse to revisit these holidays year after year.

There is also a physical bonus, described as a “Free Elena Locket. This small gold colored chain features a locket that opens to reveal a picture of Elena in her Navidad dress. The outside of the locket features a flower and has the Elena of Avalor logo on the back.

Elena of Avalor: Celebrations to Remember comes in a standard black DVD case with a holographic slipcover. Inserts include the bonus locket attached to a card sealed in cellophane, a code for 75 points from Disney Movie Rewards, and a flier for Disney Movie Club.

This disc uses Disney’s FastPlay service where some previews will automatically play before the episodes, bypassing the main menu. If you let it run its course, it plays a preview for Pixar’s Coco and the Walt Disney Signature Collection before the six episodes, followed by a promo for Disney Movie Rewards, Puppy Dog Pals, Tangled: The Series, and Disneynature Dolphins. The main menu features a still image of Elana and Isabel holding candles on Navidad.

The holiday theme of Elena of Avalor: Celebrations to Remember allows kids to get into the holiday spirit with these special episodes every year. Whether getting into the fall festivities, the Christmas spirit, or celebrating a birthday, there’s a lot to love about this collection of episodes. And the bonus locket will make kids feel like they’re a part of the Avalor community.