Was Darth Vader always sure of his power? No, and Darth Vader #9 explores a world where Vader is finding his footing as the big bad henchman of Emperor Palpatine. At the start of the comic, Vader is on his way to the Jedi Temple on Coruscant. Inside Jedi archivist Jocasta Nu has been cornered and Vader wants her. It seems that not all Jedi were killed when Order 66 was executed. 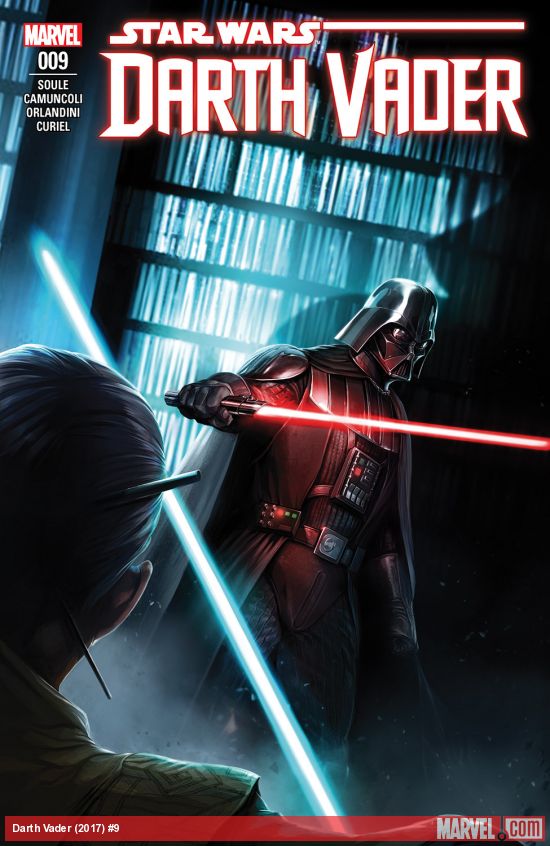 Nu is battling with an imperial inquisitor, who Vader happens to lead, and though she gets the upper hand many times, she is ultimately saved by Darth Vader’s timely arrival. Whereas the Grand Inquisitor wants to kill the Jedi, Vader wants her knowledge, something that is priceless.

I am a lifelong Star Wars fan, and since seeing Return of the Jedi in the theatres in 1983, I have loved all things Star Wars. I even enjoy the prequel trilogy. But what I have never done is read a Star Wars comic. Darth Vader #9 is an interesting way to enter the world of Star Wars in the comics, and though I enjoyed it, my one and only complaint is that it is so short.

I know what the arguments back at me will be it’s a comic — if you want the movies then watch the movies, but appreciate the comics for what they offer that the Star Wars movies can’t: time. The ability to stretch out a story over a long series comic is something movies never get.

With that complaint, let me tell you all about what I liked. Writer Charles Soule has done a terrific job in trying to bring character to what most consider an inhuman machine. Darth Vader has been voted as one of the best villains of all time, but he’s still a human inside, and we get a chance to see some of the raw human emotion that in many cases is absent in the Star Wars films.

Darth Vader is no angel, but the conflicting emotions that have permeated beneath the surface in the movies is clear and present in this comic. It’s the little things that matter in building depth in a comic. One of the best scenes that writer Soule has created is the scene with Vader and the archive robot. The robot recognizes Vader as Anakin Skywalker, and though Vader hopes to dispatch the pesky automaton with a saber throw, he quickly learns that is not possible. The robot is programmed in all manner of defenses.

This leads to Vader showing his true rage, where he literally smashes the robot with his own hands, screaming “Die” as he works.

Darth Vader #9 starts off with a crawl that gives us the backstory of what’s happening, and through that we learn about how uneasy Vader is in his new role. Combine that knowledge with the scene of him and the robot in the archive, and you appreciate how frustrated and emotional the former Anakin Skywalker could be.

Star Wars fans will love Darth Vader #9, and regular comic fans will enjoy the action the story offers. You feel the intensity and power of the Jedi, and that is thanks to the wonderful artwork of Giuseppe Camuncoli, Daniele Orlandini, and David Curiel.

I enjoyed this comic, but the next one in the series teases a fight between Vader and Nu that will be exciting to watch. I can’t wait for Darth Vader #10.