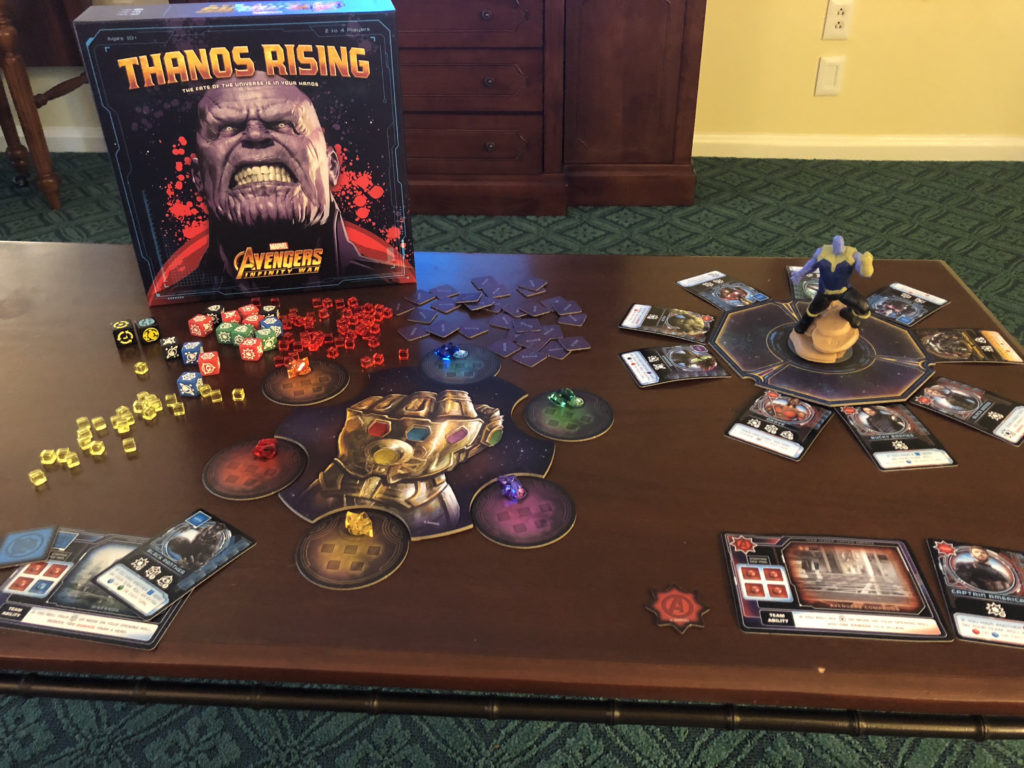 “The fate of the universe is in your hands,” says the cover of a new board game from USAopoly called Thanos Rising. Based on the new Marvel film, Avengers: Infinity War, players aren’t playing to beat their opponents. Instead, they’re playing as a team of super heroes to try and stop Thanos from collecting the Infinity Stones. It’s a game where either everybody wins, or the entire universe loses. Yeah, the odds are that high.

Thanos Rising doesn’t have a conventional board, but uses board pieces in a creative way. First there’s the Infinity Gauntlet board with Infinity Stone attachments (and three dimensional stones). Then there’s the Deployment Zone, where a three dimensional Thanos figure that sits in the center and rotates between the zones. A deck of 42 heroes and villains is distributed around this board after players chose their team and their starting hero. The majority of the pieces are dice and there’re 32 of them in total, but don’t worry, you will never use them all in one turn.

After setting up your board, each player selects their team based on four power categories: Battle, Technology, Mystic, and Cosmic. Each team card designates your team captain, whose card you add to your deck as your first hero. Nine of the remaining asset cards are distributed at random around Thanos and on each players turn, they decide which zone they are playing in before rolling any dice. 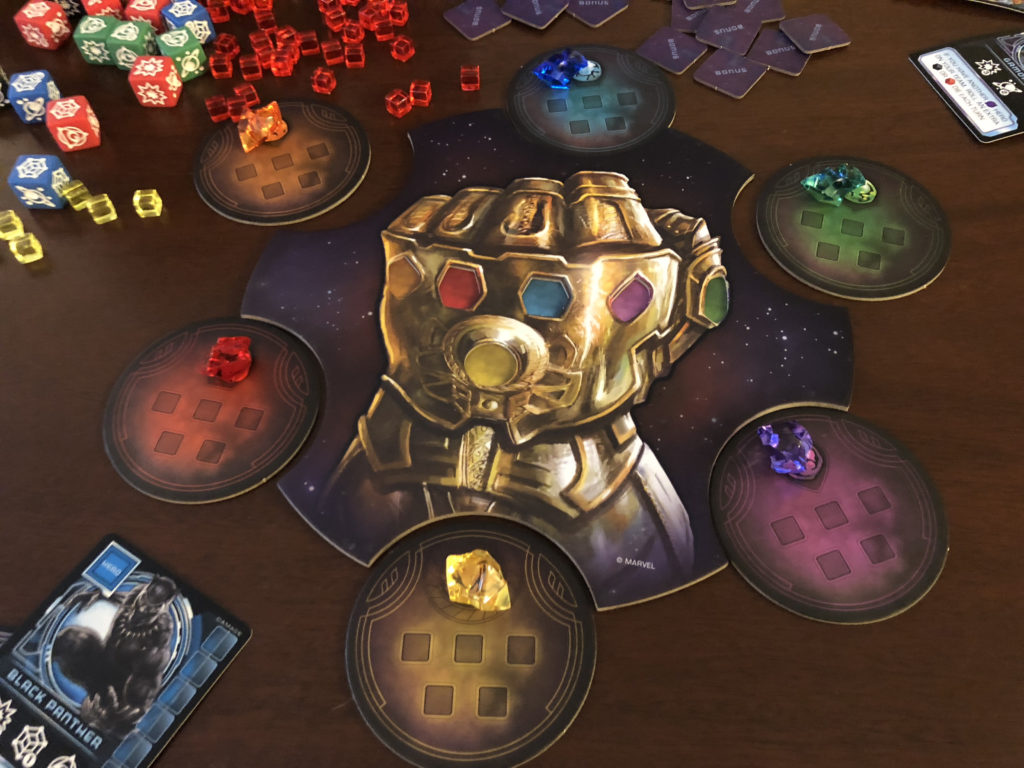 During each players turn, they will roll the dice several times. First, they roll the Thanos and Infinity Stone dice. The Thanos dice determines which zone he faces and if he’s in the same zone as you, he can inflict damage on all of your heroes. Each card also has additional instructions that can be at play depending on the situation and if any villains are in the same zone as Thanos, their damage is also applied. Your heroes can be taken out if they get to much damage (by way of damage counters placed on each card) and if too many heroes are out of the game, you run a fair chance of losing to Thanos.

The Infinity Stone Dice determines which stone Thanos gets closer to adding to his Infinity Gauntlet. An Infinity Stone counter is added to each color every time a player lands on it and once it’s been matched five times, Thanos gets that stone and the card its on turns over. There are consequences on the back and each time that color is drawn, it means bad news for all of the heroes on every player’s team. The more stones in the gauntlet, the harder it becomes to beat Thanos. Once he collects all of the stones, you lose. But if you defeat all of the villains before he gets all the stones, you win! Next, you roll the power dice, which are determined by your team card. It tells you how many to roll and which colors and you can use additional die depending on the instructions on your hero cards. The object is to match the die with the powers required to either add a hero to your team from the quadrant you’re currently in or to add damage to a villain in that quadrant with the hopes of defeating them. Players keep rolling their dice until they have either applied all of them to a hero or villain card, or until they have lost all of their dice by removing one after each roll when they can’t match it. The symbols on each die change depending on the color, making it easier to add heroes to your team when they have the same power.

Because the game has so many pieces and aspects to each turn, it took us a few turns to really get the hang of it. but once it got going, we had a blast building our team of heroes and taking down the villains. The game can be played with up to four players, but if you have a larger group you could also play in teams. The Asset Cards feature MCU versions of the characters, meaning it’s Christ Evans as Captain America and Chris Hemsworth as Thor. All of the characters reflect their Infinity War appearance as well, so the Spider-Man card is Iron Spider. 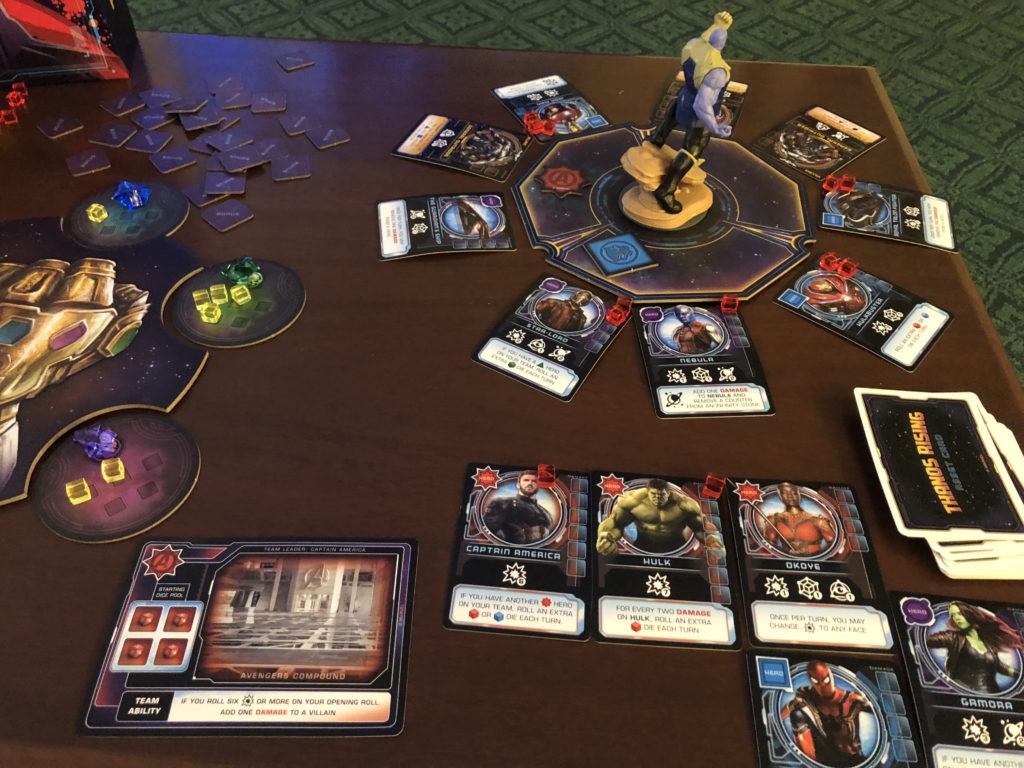 Thanos Rising has so many heroes with so many powers that can end up on your team, so every time you play feels new and exciting. It’s been a long time since I played an original game based on a film (as opposed to a theme overlay, such as a Disney edition of Monopoly). I will be playing this game again and recommend it to all fans of Avengers: Infinity War. It’s recommended for ages 10 and up and would be great to play as a family or with friends.