What do gods do when they are punished by their father, and made to be mortal? They risk life and limb to regain their godly powers. In Rick Riordan’s latest The Trials of Apollo: The Burning Maze, readers pick up the trail that former sun god Apollo is making as he tries to reclaim the lost Oracles from a trifecta of evil undead Roman Emperors. 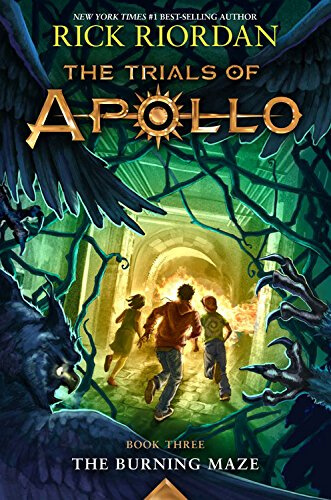 Apollo has come a long way since being cast to Earth, and in this third novel, Apollo has matured and grown from the spoiled egotistical god to a human being. With the aide of Grover Underwood, Apollo and his friend Meg, whom Apollo is forced to serve, head west to California to find the Oracle Herophile.

Having freed two oracles, Herophile is trapped in a burning maze, and Apollo is forced to rely on the knowledge of Grover Underwood, the strength and skills of Piper McLean and Jason Grace, as well as his own growing humanity and loss of godly powers.

Apollo confronts the reality of humanity, where not everyone can do as they please and that even though he is a god, evil exists and can scare the most powerful.

The Trials of Apollo series has always been an exciting read with the inclusion of so many established characters from Rick Riordan’s Greek and Roman demigod world, but I found that as I read book one and two of this series, I was less interested in the established characters and I wanted to know more about Apollo and how Riordan was going to develop him.

The idea of an egotistical self-centered god being forced to confront reality in a world that he had no more power over than anyone else, is interesting. I was hooked from book one, but the growth that Apollo shows is not only fun to watch, but also a little heart-wrenching. I see how Apollo changes from book to book like watching the growth of a child. The Burning Maze is that part of the series where Apollo confronts some horrible realities that are a part of life, and in many ways, we, like Apollo are unable to do much about.

When Riordan wrote The Lighting Thief over a decade ago, he was laying the foundation for a rich literary world, that would have a sandbox so big and diverse that parallel stories could happen at the same time, and you never worried about what was happening in the other corners, because the story you were reading was so rich and detailed, you had to know how it was all going to work out.

The punishment of Apollo lets Riordan readers have a fresh perspective on life and hit refresh on what we know about many characters from past books like Percy Jackson, Grover Underwood, Jason Grace, and Piper McLean. We also get the chance to learn more about smaller characters like Coach Hedge who has more opportunity for development in The Trials of Apollo series.

As great as it is to watch old faces get a new look, and see secondary characters get fleshed out, the focus of this series and The Burning Maze is all about Apollo and his growth. Readers will like Apollo, hate him for his actions, empathize with his experiences, and root for him to succeed. Riordan has wrapped Apollo in that arrogance that he has shown, but we also get to see the humanity that shines through. Riordan has craftily made Apollo likable and in The Burning Maze at his weakest, we want the former god to succeed.

The saga takes us to Palm Springs and a California that is ravaged by wildfires and drought. Beneath the land is the Burning Maze that holds the essence of the Titan sun lord Helios, which holds Herophile captive waiting for Apollo to free her. We meet the nature spirits that live in a remote area of the desert in Palm Springs which holds special significance for Meg McCaffrey.

Meg McCaffrey is the second brilliant act of Riordan’s Trials of Apollo series. Partnered with the cast out Apollo, Meg is that young spirit of a child who is stronger then we think, smarter then we give her credit for, and someone who just wants to find a home.

The Burning Maze allows us readers to see where Meg came from, who her father was, and why his work is so special. Meg finds her home in this book, and as a long-time reader, I was grateful to Riordan for some stability.

While Meg finds her place, Apollo finds that the frailty of life is something that claws at his emotional well being throughout the book. The Burning Maze is a book with death in it, and from major characters to smaller ones, we watch and follow as Apollo comprehends what is happening, how death affects the people around him, and how he internalizes and deals with death in his own way.

Aside from the emotional growth of the teenaged human Apollo, we have a story that exposes the real bad person leading the group of three undead Roman Emperors. Caligula is the third in the triumvirate of Roman rulers that has been planning for hundreds of years to take control of the world. For Caligula, he wishes to become the new sun god and take the place of Apollo. Weakened to his present form, Apollo must rely on the friendships he has made, his own internal strength, and some luck to defeat Caligula.

I must say, that Caligula is more than just the typical bad guy in a book. He’s evil! Not in the sense that he kills people, but more in a sense that Caligula is calculating, ruthless, manipulative, and when he can intimidate Apollo hundred of years ago when Apollo was still a god, one must think that this power of evil is exuded through his presence.

Rick Riordan peppers the book with humor and some insightful plot twists that not only make readers interested in the story but encourages the reader to read beyond the text and learn more about the ancient Greek and Roman gods.

I don’t need to encourage Rick Riordan fans to read The Burning Maze, because they already have. If you haven’t read a single Rick Riordan book, what is stopping you? The themes he explores in his text have no doubt entertained and challenged young adults for years, and with The Burning Maze, kids and adults will have a new appreciation for the sacrifices made every day, and how sometimes no matter hard we work, we can’t always get what we want. We learn with Apollo how to grow and move on.

The Trials of Apollo: The Burning Maze is a fantastic addition to my book shelf, and everyone should read it. Much like Harry Potter and the Prisoner of Azkaban, The Burning Maze is the best book in the series. Sadly, I have to wait until Fall 2019 for Book 4: The Tyrants Tomb.