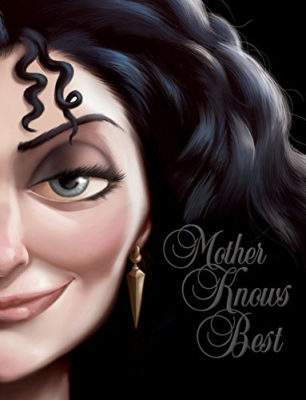 Serena Valentino’s book series about Disney Villains continue with its fifth entry, Mother Knows Best: A Tale of the Old Witch. Fans of Tangled who have never read the previous entries in the series should pause to catch up first, as this isn’t just about Mother Gothel (more about that later) and they will be painfully confused if they aren’t caught up on the tales of the Odd Sisters. To catch up, readers must finish Fairest of All, The Beast Within, Poor Unfortunate Souls, and Mistress of All Evil.

I was initially a fan of this series, greatly enjoying the first two entries. But my biggest criticism is that starting with book three, each book has needed to bend the rules of the original story to make the new one fit. And the Odd Sisters have continued to have a bigger involvement in each book to the point where they often take away the reasons we love to hate these Disney Villains. Which leads me to this:

Mother Gothel is a witch? In Tangled, she never demonstrates any magical abilities or knowledge of it. She’s smart, vain, and selfish; that’s why she’s so intriguing. By giving her powers, a coven, and an unselfish reason for kidnapping a young princess with magical hair, it fundamentally changes the character. Making her a witch is an injustice to her character. It would be like giving Lady Tremaine magical powers (*Ahem* Cinderella III *Ahem*).

Gothel was raised in a magical realm of the dead with her two sisters and a cruel mother who kept magic from her daughters and hid the grim reality of her job serving Hades. When Gothel overthrows her mother, the Odd Sisters step in to assist her in learning magic. But when she and her sisters are forced to leave their realm, they must use a magic flower to stay alive and young. When the nearby King feeds the last remaining flower to his pregnant wife, Gothel will stop at nothing to save herself and her sisters.

Does any of that sound like the Mother Gothel you know and love? No? That’s the problem with this book. Each volume makes me more and more sour on the entire series and this one makes me wish Disney Press would stop publishing them entirely. Sadly, this one ends with an obvious lead-in to a sixth installment. If you’re looking for a fun read that bends Disney classics, I recommend the Twisted Tale series instead (A Whole New World, Once Upon a Dream, Reflection). That series is like an alternate universe variation on each story, whereas this one presents itself as the unseen backstory for the villains that you didn’t know about. The fact that Gothel is just a puppet of the Odd Sisters, like Maleficent and Ursula before her, fundamentally destroys her character. I can’t wait for time to erase this from my mind.

Mother Knows Best: A Tale of the Old Witch gives magical powers and changes the motives of a character who was cunning, selfish, and vain in the film that made her famous. Her backstory becomes too busy and intertwined with the Odd Sisters in the hands of Serena Valentino. Like the Once Upon a Time television series, these books become too complex with each entry and has lost its way by volume five.