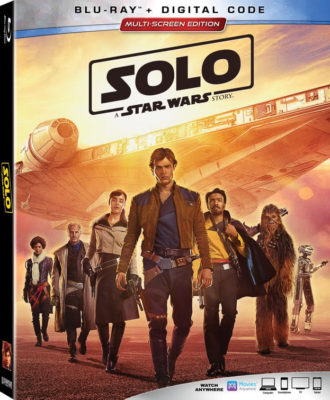 Lucasfilm’s Solo: A Star Wars Story makes a Kessel Run to home video with the Blu-Ray/HD Digital release. Fans of a galaxy far, far away can relive the excitement, adventure, and humor of Han Solo’s origin story as many times as their heart desires. And let’s face it, it’s a Star Wars film, so you will be obsessing over every frame.

Young Han Solo is determined to get his girlfriend Qi’Ra off his scavenger world of Corellia, but things don’t go exactly as planned. Years after being separated, he ends up joining a band of thieves, which leads him back to Qi’Ra, who is now the property of a major crime lord. If he wants to free her, he will have to betray all of his instincts and team up with some unlikely companions.

Han Solo, Chewbaccca, and Lando Calrissian’s worlds intersect for the first time in this spin-off that harkens back to the original trilogy’s characters, style, and spirit. While the actors may be different, the characters feel the same. The film is largely based on a few lines of dialogue from the original trilogy that gave a tiny glimpse into the lives of all three characters.

A few things are a given if you’ve seen the original trilogy before. This includes Han Solo becoming the owner of the Millennium Falcon, the fact that he and Chewie will make it through whatever obstacles the film throws their way, and that he will complete the Kessel Run (in less than 12 parsecs). However, that doesn’t make it any less fun.

I ask you this: since you’ve seen a Star Wars film before, does it mean that you won’t enjoy watching it again? No, it doesn’t, and that’s why all Star Wars fans owe it to themselves to give Solo: A Star Wars Story a chance. What it lacks in Jedi mythology and lightsaber duels it makes up for in exciting action, hilarious comedy, and fan service moments (if you can call a moment “Fan service” in an entire film that is exactly that).

With some in-depth bonus features, fans will be surprised to find how many effects were practical and in-lens. They will also find deleted scenes and lots of behind-the-scenes footage, including a visit to the set by George Lucas. There isn’t much in the way of discussion about the production’s change of directors, but that’s okay. It spares us the drama and focuses on the magic of movie making.

The Blu-Ray offers an impressive transfer with a dynamic color palette, including inky blacks and extreme brights. The hyperspace sequences in particular are stunning on this transfer. Details are crisp and clear, although the film has an intentionally soft look at times, helping it feel connected to the Original Trilogy.

The main audio mix is a 7.1 DTS-HD Master Audio track. It’s fully immersive, with score, sound effects, and even dialogue traveling around your living room. Other options include a 2.0 Descriptive Audio track plus French and Spanish 5.1 Dolby Digital.

One advertised bonus feature, “The Millennium Falcon: From Page to Park,” is missing from all physical and digital releases of the film so far. Perhaps it will launch digitally at a later date

The standard Blu-Ray/HD Digital combo pack of Solo: A Star Wars Story comes in a standard Blu-Ray case with disc holders on both interiors. The feature disc and bonus disc both have disc art and the only insert is a flier with your Movies Anywhere digital copy code, also redeemable for points through Disney Movie Rewards. The initial pressing comes with an embossed slipcover.

There aren’t any previews on either disc. Both use the same menu, which features the Blu-Ray cover art while clips from the film play in the sky next to the Millennium Falcon.

Solo: A Star Wars Story is an action-packed adventure with genuinely hilarious moments and an engaging story. Inspired by the original trilogy, it gives fans exactly what they’ve been begging for while being more lighthearted than Rogue One. This Blu-Ray release adds a digital copy in addition to an entire disc of bonus features.