Guests and Disney Vacation Club members will have a new resort to enjoy in 2022. Walt Disney World announced plans for a nature-themed mixed resort on Bay Lake. The property will be nestled between Wilderness Lodge and Fort Wilderness Resort & Campground. Theming will match its surroundings as well as reflect Walt Disney’s love and respect for nature. This new location joins previously announced upcoming resort projects that will cumulatively add more than 1,700 new hotel rooms and villas to the “happiest place on Earth.” After months of refurbishment and redesign, World of Disney stores at Downtown Disney and Disney Springs held a soft openings this week. The stores are bright and spacious and features plenty of hidden details, cool new effects, and of course rows and rows of Disney merchandise. Along with the redesigns, Disney launched the Holiday 2018 and the Mickey Mouse Club lines. Both feature new and exciting styles a wide variety of looks that will appeal to guests young and young at heart. The two locations will hold their grand re-openings later this week.

With the Disney/Fox deal on track to close early next year, Disney has laid out an executive structure for the acquisition. Several Fox studio heads will join Disney once the deal goes through. As of now, Disney plans to keep a Fox Family and Fox Animation division along with Fox Searchlight and Fox 2000. Walt Disney Studios Chairman Alan Horn will oversee both Walt Disney Studios and the Fox divisions once the companies have merged.

Ant-Man and the Wasp: Nano Battle! To Open in March at Hong Kong Disneyland 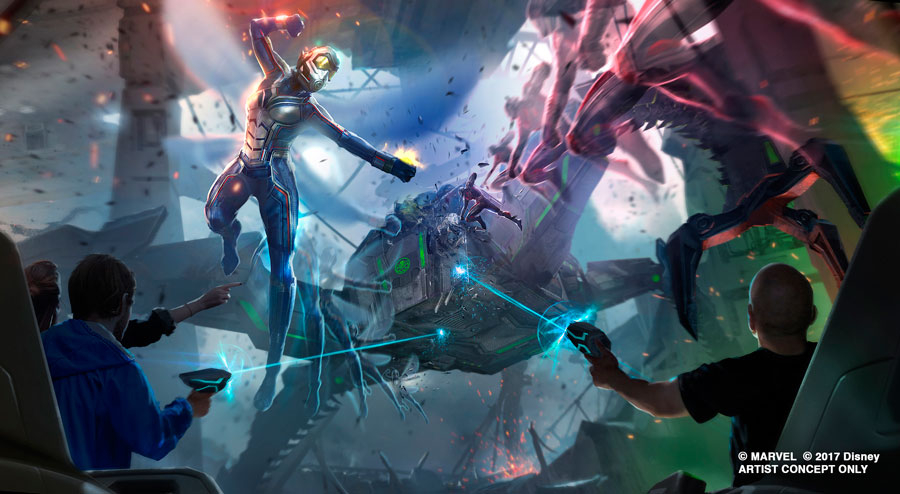 Marvel fans will soon be joining in the fight against, no, not Thanos, but Armin Zola and an army of Hydra bots at Hong Kong Disneyland. The Ant-Man and the Wasp: Nano Battle! interactive ride will open to guests in March of 2019 and will feature Paul Rudd and Evangeline Lilly reprising their film roles. The immersive attraction replaces Buzz Lightyear’s Astro Blasters and will follow the same game play. Riders will help Ant-Man and Wasp save S.H.I.E.L.D. and the day by targeting the dangerous swarm-bots. Along with the open date announcement, Hong Kong Disneyland also shared news of celebrations taking place at the Resort throughout the rest of the year. This week the Bahamian government voted to approve the sale of Lighthouse Point to Disney Cruise Line. Similarly to Disney-owned Castaway Cay, the 700-acre area of the island of Eleuthera will be used by Disney as a private retreat for Cruise Line guests. Disney plans to develop 20 percent of the land for recreational use, give 170 of the 700 acres back to the Bahamas for conservation, and preserve an additional 100 acres of salt ponds on the property. The decision to allow the sale came mid Friday afternoon after being pushed back from Tuesday’s originally planned vote.

The Conners premieres on ABC. This week the Conner family returned to television minus Roseanne. Did the season premiere meet expectations? Kyle reviews the new episode and shares his opinion on the future of the series.

15 Disney ways to spend $1 billion should you win the Mega Millions Jackpot. Would you like to take 27,057 seven-night Caribbean cruises on the Disney Fantasy in the Royal Suite? With $1 billion jackpot (now $1.6 billion), you could do just that! Not much for sailing, that’s ok, we have 14 other ways you could spend that money on your Disney favorites.

Jungle Cruise Release Date Pushed Back to 2020. This weekend, Walt Disney Studios announced they were pushing back the release of Jungle Cruise from October 2019 to July 2020.

Okapi calf born at Disney’s Animal Kingdom Lodge. Walt Disney World is growing…one animal at a time! Earlier this month a rare okapi calf was born at Disney’s Animal Kingdom Lodge. The calf’s parents are, mom Zelda, and dad Mandazi and were chosen to breed through the Species Survival Plan. The male calf will remain backstage for the time being before joining other animals on the savanna.

Play Disney Parks Adds New WDW Experiences. Disney’s Art of Animation Resort will be the first hotel property experience added to the app. Here guests will be able to create their own animations as well as watch the hotel lobby’s art wall come to life. Additionally, guests visiting Disney’s Animal Kingdom can join Alpha Centauri Expeditions (ACE) on an adventurous journey as they explore colors, cultures, and creatures of Pandora.