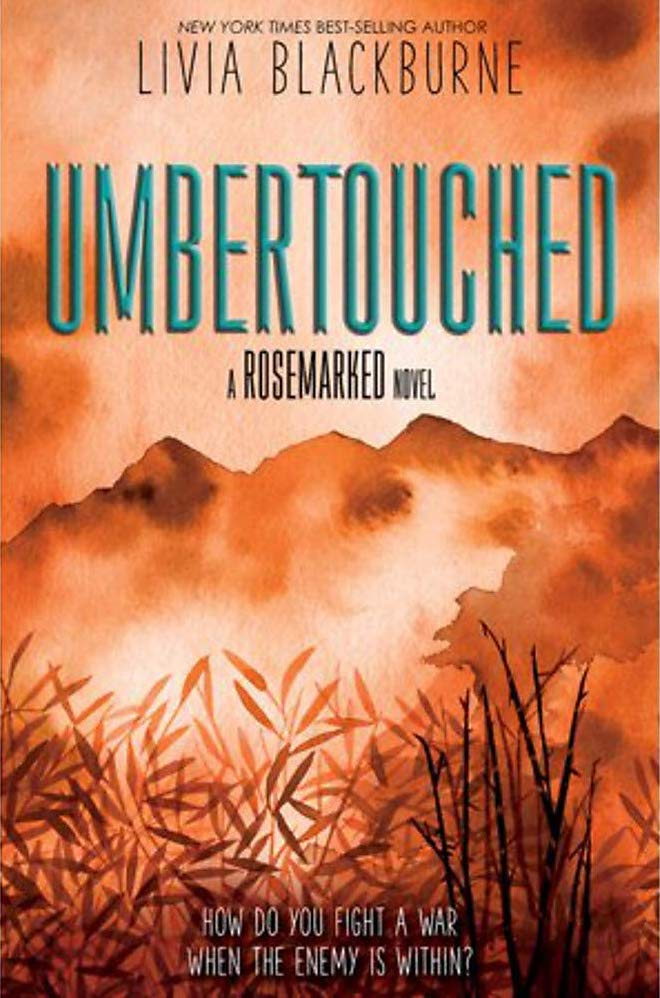 Livia Blackburne’s memorable novel Rosemarked stayed with me when I read it last year. The story comes to a conclusion in the second part of this duology in Umbertouched, now available from Hyperion, an imprint of Disney Book Group. The lands of Ampara, Mishikan, and Monyar will never be the same when the dust settles.

If you didn’t read Rosemarked, you might want to stop reading now to avoid any spoilers. When we last saw Zivah the healer and Dineas the warrior, they were about to embark on a mission to stop the Emperor from intentionally spreading the rose plague to other lands in an act of chemical warfare. Zivah has the plague and the clock is ticking, while Dineas survived and is umbertouched, immune to the disease.

The narrative alters back and forth between Zivah and Dineas’ points of view, but they are separate more than together this time around, making for a less satisfying read. You now have two lead characters to keep track of through a confusing war and it feels like it meanders aimlessly for too long. Most of the characters were established in Rosemarked with almost no recaps to refresh readers memories. For this reason, Umbertouched would be best read back-to-back with the first book with no length of time between.

Zivah and Dineas sparked a romance in Rosemarked before Dineas’ wiped memories were returned to him. The juiciest parts of this book come from both characters trying to hide their feelings for the other, not realizing that they still feel the same way about each other. But again, they are apart more than together and readers don’t get to linger in it long enough to get any real satisfaction from it.

Since the main characters are on two separate quests through a large war that keeps them apart, the story quickly becomes stale and monotonous. By the time the climax arrives, you’re ready for the entire experience to wrap up. And then the ending becomes drawn out and doesn’t leave you with chills the way you expect it to.

Rosemarked was a solid story with a great premise and an intriguing setting. The entire book worked well as a standalone while setting up this sequel. Sadly, Umbertouched doesn’t live up to the high expectations readers have coming off the first novel. It feels like there wasn’t enough plot to reach the desired page count so a lot of uninteresting filler was added. It tries to establish the devastation of the war by killing off most of the side characters in slow succession, leaving little left in the end.

Rosemarked is a wonderful and original novel that earns my highest recommendation. Umbertouched is a disappointing sequel that is predictable and disappointing. It’s difficult to satisfy readers with a multi-book series. At least this one is just two books vs. longer series like Allegiant or The Hunger Games.