Book Review: “Aru Shah and the Song of Death” by Roshani Chokshi

Aru Shah and the Song of Death is an action-packed emotional roller coaster through Hindu mythology. The second book in the Pandava Novel series by author Roshani Chokshi brings back the thirteen-year-old protagonist of last years hit novel Aru Shah and the End of Time and adds depth and layers to an already lovable character. 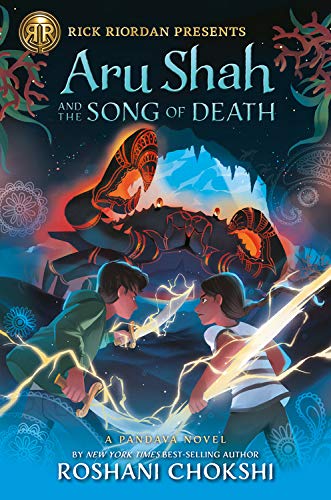 When we first met young Aru Shah, she had inadvertently awakened the Sleeper and endangered the world. Aru, the reincarnated Pandava brother Arjuna from Hindu mythology partners with another reincarnated Pandava ‘sister’ named Mini, and they save the world. In Aru Shah and the Song of Death, Aru and Mini continue their training with their pigeon guide Boo. While in the Night Bazaar they learn of the theft of the bow and arrow that belonged to the Hindu god of love, Kamadeva.

Blamed for the theft along with a new Pandava reincarnate girl named Brynne, Aru and Mini are forced to team with Brynne, as well as a boy named Aiden, to find the stolen items in ten days time. If the Pandava team fail, then they will be cast out of the Otherworld losing their connection to the Hindu spiritual world and missing out on their chance to save the human world.

Roshani Chokshi has a hard act to follow. The first book in her series was such a delightful fun romp into Hindu mythology that readers couldn’t help but cheer Aru Shah on as she learned to confront her fears and stave off the end of the world. When I opened the first page of Aru Shah and the Song of Death, I was expecting an entertaining story, not the emotional tug at your heart in every chapter.

Part of what makes the Pandava series so enjoyable is Aru Shah. She has that sarcastic wit and the silly antics that make any reader laugh and smile. No matter the age of the reader it is easy to like Aru. In Aru Shah and the Song of Death, our main character and supporting characters, like Brynne and Aiden, are given depth and emotion that let the readers connect with and feel for these poor kids, as they try to make sense of the single parent families they have.

Each character struggles with accepting the reality they face. They might be strengthened with the knowledge that they are the reincarnation of the Pandava Brothers; each character is constantly battling the self doubt that they hide. They must somehow find a way to survive the teenage years and make amends with the blame they put on themselves for their real-world family situations. In a single parent family, kids often put a heavy amount of blame on themselves for the fractured relationship of their parents. The struggles are real, and though Aru Shah and her friends are fictional they are modelling character traits that millions of kids know and identify with easily. The target audience will connect with Aru and her friends easily.

Aiden’s mother had divine powers but gave them up to marry his father. Aiden’s father left shortly afterward, and ever since he was a young boy, Aiden has struggled with the idea that it was his fault. Brynne lives with her uncles, not really having a connection with her parents, and Aru is filled with guilt that she let the Sleeper out – a monster that will bring the end of the world with Lord Shiva, the god of death. Mini struggles with her own phobias, and within this group, they all make each other stronger. Alone they are not strong enough to survive the challenges they face. Together they are unstoppable.

While there are fantastic battles with various monsters throughout the book, Aru Shah and the Song of Death is story about family, and how in the modern world the idea of family is not the traditional household of a mom and dad with two kids. Family takes on many forms, and though one may not be blood related, friends form a close bond that is as equal as a family.

Chokshi seamlessly blends Hindu mythology into a modern world. By putting a human face on the legends and myths that have been around for thousands of years, she provides us with a modern-day story that shows kids struggling with the world they live in. Readers get to understand and deepen their connection with Aru and Mini, are introduced to Aiden and Brynne, and learn to empathize with the villains like Lady M.

Lady M tries talking to Aru and reasoning with the group of reincarnated Pandava Brothers. Asking the heroes, “What is something that never dies but lives a thousand lives at once.” The answer is stories, and Lady M proceeds to explain that throughout the years and centuries stories are told and retold, with new spins put on by the teller, which keep people alive. If the story is lost or scattered, then discovered again even in pieces, the story lives again. Lady M is seeking to keep her story alive. Aru, Aiden, Brynne, and Mini are all trying to understand their own personal story. Lady M looks to keep her story going, even if it means using devilish tactics to accomplish her goal.

Middle school students have a new novel to check out, where the characters have similar family stories and are heroic in their own special way. Aru Shah and the Song of Death is a fantastic novel that continues the story of Aru Shah while adding depth and layers to the complex teenage characters that everyone will route for.

Welcome back Aru Shah, it’s so good to see you again.