Guy Ritchie’s live action adaptation of Aladdin flies into theaters on May 24th. Ahead of the film’s release, Hasbro has unveiled a line of dolls based on five characters from the film. This includes three versions of Jasmine, two versions of Aladdin, two versions of Genie, plus Jafar and a new character named Dalia. And for fans who want one of each doll, “The Agrabah Collection” makes it easy to get each character in an iconic look for $99.99. The collectable packaging features a backdrop of the interior of the palace of Agrabah. Having not seen the new film yet, my assumption is that this package presents the characters as they appear during a specific moment in the film. Since Aladdin is in his Prince Ali outfit, this moment is likely a lead-in to “A Whole New World.” The back of the package features some nice images of the live action inspiration for each doll. Since this is an international release, it includes multiple names if they differ in different languages. The quality of each doll varies. Genie is more like a 12-inch action figure, with no soft goods to speak of and a hard body that reminds me of the Marvel Titan Hero toy line. Aladdin and Jafar both feature removable turbans and curiously, Jafar’s costume has a lot more details. He features a soft plastic vest that goes over his robe and cape. Aladdin, on the other hand, has all of the details of his costume printed on his outfit, making it look flat and a little cheap. Jasmine features an exquisite translucent cape with glittery peacock feathers, but her top suffers a similar fate as Aladdin’s costume. The midriff accents are printed on fabric, which doesn’t quite match the skin tone correctly. It’s the only criticism to speak of on this otherwise beautiful doll. Dalia is a fun doll, with her voluminous hair and iridescent dress with big sleeves. Outside of this box set, fans can also pick up a Jasmine Deluxe Fashion Doll, Jasmine in a purple outfit, Genie in human form, and streetrat Aladdin with Abu. There are also singing dolls of Jasmine and Genie. 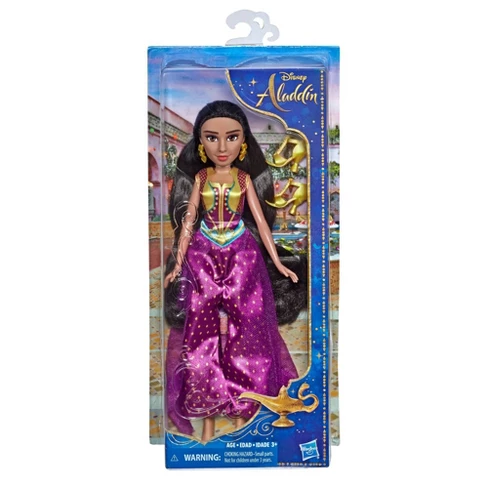 It’s a shame that of all the dolls, the only accessory is Jafar’s scepter and Abu. I feel like one of the Genie’s or Aladdin should’ve included a lamp. A flying carpet would’ve been another nice touch. But overall, I’m impressed with the way these dolls capture the essence of the actors from the film while making them more stylized for kids. A few of the details leave a lot to be desired, but kids who love the film will enjoy these dolls. For collectors, the Agrabah Collection makes an easy way to pick up one version of each character.